For his Hong Kong Moth Recording Project, Roger Kendrick chose an easier and cheaper method to promote moth preservation. He started a moth survey on iNaturalist, a global database available online and on mobile apps. Around 1,500 photographic records of moths in Hong Kong have been collected so far and Kendrick believes most were submitted via the app, which automatically stores the geodata of the photos.

Kendrick uses the internet to allow citizen scientists to store and share their data, which then becomes a reference point for other citizen scientists as well as experts. He thinks the feedback loop between experts and amateur scientists is crucial. This is why he constantly posts the observations and statistics of sightings to members of the moth-enthusiast community. He ranks users according to how many observations they make and species they spot as a way to encourage more collection, discussion and conservation.

Barcoding and recording though apps are among the new methods citizen scientists can use to conserve those species that are still around and can be barcoded and photographed. But, in fact, citizen scientists have been playing a part in conservation for years, including helping to protect critically threatened species in Hong Kong, by influencing public policy.

For Martin Williams, a writer specialising in conservation and the environment, “citizen science” can often be a fancy term that does not have much meaning in itself. What matters, says Williams is that people love nature. That love of nature may drive them to observe it, and when they find the nature they love is under threat – they will record as well as observe. They become citizen scientists.

He cites the actions of voluntary scientists who discovered the rare black-faced spoonbill in the Mai Po Nature Reserve. Williams’ friend Peter Kennerley, a British birdwatcher, discovered how endangered the spoonbills were in Hong Kong in the early 2000s. Like many citizen scientists, he initially recorded the number and distribution of the birds solely out of curiosity.

His observations eventually captured media attention in China, Vietnam, Japan and Taiwan and made the spoonbills famous. The Mai Po marshes, the habitat of spoonbills, are protected from development plans because of their ecological value.

Research by citizen scientists’ has also been used in attempts to thwart some development plans. Williams gives the Lung Mei Beach development plan as an example. In 2008, volunteers of the Hong Kong Wildlife Forum found 216 species in the inter-tidal range of Lung Mei Beach in Tai Po, 36 times the number identified by professionals hired by project consultants.

Williams thinks the marine-life conservationists worked harder to identify species because they are more concerned about marine biodiversity. He says government-hired professionals may have a conflict of interest. Citizen scientists are unpaid and their research is “not rooted from money”, says Williams.

Although the man-made beach project at Lung Mei was finally given the green light, Williams thinks Hong Kong Wildlife Forum’s intervention is a good example of passionate citizen scientists doing much more than just collecting data.

“It’s useless to write it down only by and for yourself,” says Williams. “If you tell the world about it, you could have valuable result.” 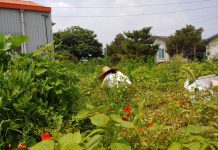