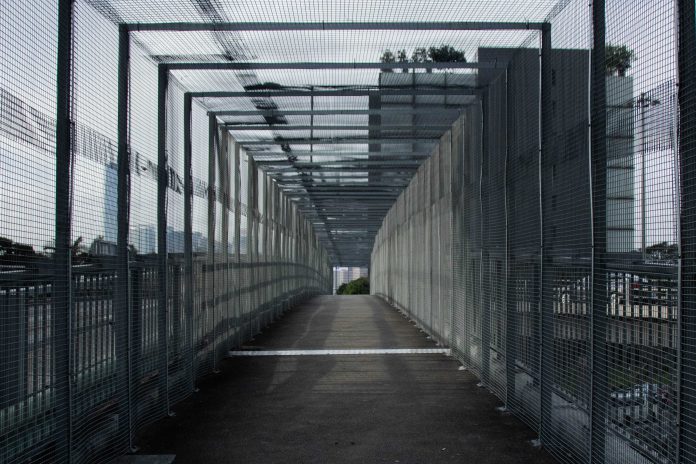 Iron nets have been installed on footbridges across the city amid the anti-Extradition Law Amendment Bill (anti-ELAB) movement, especially those above trunk roads or railways, in a bid to prevent protesters throwing objects from heights onto nearby carriages.

Anti-ELAB protesters tried to block the Cross-Habour Tunnel by throwing objects from footbridges above the Cross-Habour Tunnel Toll Plaza and that connecting PolyU and Hung Hom station in the week of November 11, 2019 in an attempt to trigger a city-wide strike. Violent clashes broke out between protesters and police officers at the PolyU campus. Police sealed off all campus entrances and surrounded the campus till around the end of November. The city’s vital tunnel reopened after two weeks of closure, on November 26, 2019.

“The installation did not solve the deep-rooted socio-political problem. It is only an ostrich policy,” says Chu. “Is it practical to fence all footbridges in Hong Kong?” He also questions if the fencing has breached the Fire Safety Ordinance and worries if it will threaten safety of footbridge users. Chu says residents nearby are very concerned.

“The installation did not solve the deep-rooted socio-political problem. It is only an ostrich policy.”

“Installing iron nets is only a temporary solution. The root cause of the social problem has nothing to do with the footbridges,” says Chung Shing, a PolyU student who frequently uses the footbridge connecting the campus and Hung Hom station. “The fencing also recalls memories of what happened at PolyU in November last year. All memories come to my head when I walk across the bridge,” he adds.

Fenced footbridges can also be found in other districts where protests are rare. Kwai Tsing District Councillors, Ng Kim-sing and Tong Ho-man, discovered installation of iron nets in a pedestrian footbridge connecting Ko Fong Street and Kwai Chung Plaza in January this year.

Similar to Yau Tsim Mong district, no official consultations or announcements were made before the installation. Tong and Ng wrote to the Highway Department concerning the issue. The department replies that the installation is only a temporary measure to prevent throwing of objects from the footbridges. The two councillors find the explanation unacceptable. “No cases of objects being thrown from height on that footbridge have been reported in the past year,” Tong says.

Tong says the fencing has caused many problems. Some residents complained to him that the fences make them feel uncomfortable. Walking across bridges wrapped by nets, residents have the feeling of being trapped in a prison cage. “These nets also lead to poorer littering problem,” he says.

“How can the problem be solved when the government does not try to understand why people are still saying ‘Five demands, not one less’?” says Ng. “Even if no one throws objects into carriageways anymore, does it really mean the problem has been solved? I think we all understand that the problem is still here.”

The Highway Department explains the installation of iron nets is to ensure safety of road users and maintain normal traffic on public roads by preventing the throwing of objects onto nearby carriages. It says the arrangement is only a temporary preventive measure given rise by the exceptional circumstances and the government will review the situation as and when necessary. However, no timetable of removal is given.