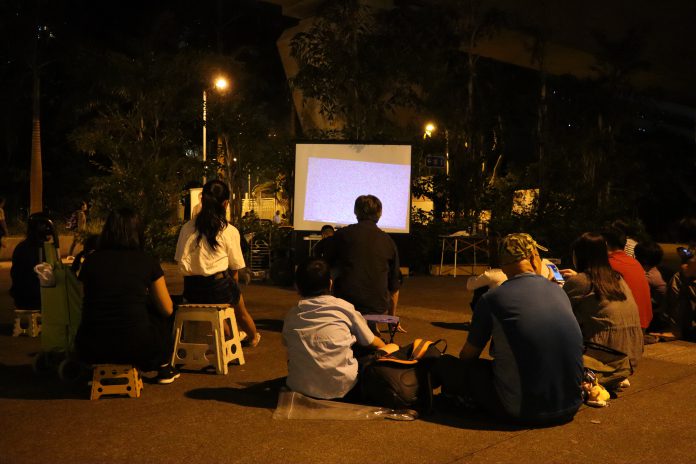 Watching movies is no longer confined to cinemas. Public screenings have now penetrated the city and drawn community members together.

A screening of the World Cup Qualification match between China and Hong Kong in 2015 in a public space near her home when everyone was cheering for the Hong Kong team opened the door to public screening for Angela Chu Pui-yee. She is enchanted by the casual atmosphere that people around her wearing slippers and sitting on the floor.

“I have fallen in love with public screenings since then. It connects the neighbour and bring us together,” Chu says. She is now a frequent participant of different screening sessions in the community as this new form of theatre gets more popular and diverse.

From then to now

In October 2019, Chu joined a public screening in Sham Shui Po of a Korean movie “A Taxi Driver (逆權司機)”, which is about the social movement in Gwangju in 1980s. The screening was held by HK Community Cinema, an independent organization that aims to promote non-mainstream and socially impactful movies by holding public screenings almost every week. Guests of different expertise including scholars, movie directors, journalists are often invited to hold a sharing and discussion session after each screening.

Chu particularly enjoys the sharing and discussion sessions and she thinks they make public screenings different from conventional screening in cinemas where everyone must leave as soon as movies end.

“I can gain a spark of inspiration every time I listen to them (the guests). It really expands my knowledge and horizon,” adds Chu. Apart from interactions with guests and other audience, Chu also likes the casual nature of non-commercial public screenings, “like we don’t have to watch advertisements before a movie that people are forced to do in cinemas,” she says.

Cheung King-fai, one of the main organisers of HK Community Cinema, hopes that public screenings can serve as a platform for different people to ‘sit down and talk’, as society is becoming more divided. He also wants to expose the general public to a wider range of media content because movie choices in cinemas are often restricted nowadays, and movies featuring sensitive issues are often excluded.

Apart from “A Taxi Driver”, the HK Community Cinema held eight screening sessions of non-mainstream movies that features social movements in September and October in 2019, including “1987: When the Day Comes (1987: 逆權公民)”, “Winter on Fire (凜冬烈火)”, “The Edge of Night (街頭)”, “Hand in Hand (牽阮的手)”, and “Wind That Shakes the Barley (風吹麥動)”.

Watching “A Taxi Driver” when Hong Kong is embroiled in the Anti-Extradition Bill Amendment Bill (Anti-ELAB) protests, Zowie Lee Cheuk-yuet, another audience of the screening regards her presence as a form of community participation. “Apart from simply coming out for a movie, I have a sense that I am responding to the call of society,” she says.

She thinks that what makes community screenings special is organisers have more flexibility that allows them to make timely choices. They can screen movies relating to a particular on-going social movement or political situation at the moment and announce screening time on Facebook.

Align to what she expected before going to the “A Taxi Driver” screening, Lee met people who have participated in the Anti-ELAB movement at the screening. She believes people are connected as they all can relate themselves to the movie.

“I see a community composed of people with a shared identity, in front of me,” says Lee. “Community screenings bring protesters in the streets into our daily lives. It is another form of ‘action elevation’ that sets aside the rather confronting and intense atmosphere, “she adds.

The culture of public screening has rooted in Hong Kong. “Blossom Everywhere Screenings (遍地開放映會)”, a joint-district screening activity initiated from a Telegram group, calls on volunteers to organise a screening session of a designated movie in districts they live, has become the rage during the Anti-ELAB movement.

William Shek and Leticia Wong Man-huen, newly elected District Councillors, co-organised one of the “1987: When the Day Comes” screening sessions in City One Shatin after they joined the “Blossom Everywhere Screenings” Telegram group. Before screening the movie, they also live streamed “Citizens Press Conference (民間記者會)”, a news briefing organised by members of the Anti-ELAB protest. They think that the Korean movie can serve as an important reference for Hong Kong as history often repeats itself.

The screenings of “Winter on Fire”, a documentary on Ukraine’s fight for freedom was held on 29 August and “1987: When the Day Comes”, a Korean film about the country’s fight for human rights and democracy was held on 24 September. Both of them drew huge crowds  with more than 30 venues holding public screenings across the city at the same time.

While Shek and Wong could not book an indoor venue for the screening, they managed to show the film in a corner of a public area next to City One MTR station where everyone can stop by and join, with a portable screen and projector borrowed from their friends.

Despite the rather simple settings, the screening attracted audience of all ages and most of them were nearby residents who joined the event after school or after work. Some residents even brought their own foldable chairs and came with their families.

Shek and Wong say they hope the whole community, disregarding their political stance, can join their public screening and participants can share their opinions openly.

“It’s different from watching a movie in a dark room of a cinema where you can barely see what’s happening around you… Here (in community screenings) you can directly feel the emotions of the person next to you,” says Wong. “It (holding community screenings) is a worthy thing to do no matter there is only one audience or a lot,” adds Shek.