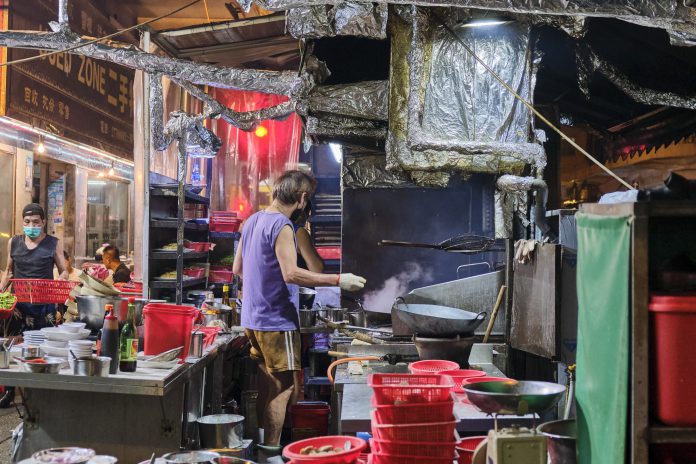 Dai pai dong owners in Fo Tan may face eviction by 2024 due to government plans.

Jerry has been working in Tai Yuen Dai Pai Dong in Fo Tan for over 30 years. The stall is facing eviction by 2024 due to government plans to redevelop Fo Tan’s East and West Cooked Food Markets into a new government complex.

“Our latest rental contract with the Food and Environmental Hygiene Department (FEHD) ends in June 2023 and FEHD officers say we have to move by 2024, but many details are uncertain. We are unlikely to move to another place since it is difficult to find a space as big as our current site, where big groups can eat, chat and have a beer,” says Jerry, who declines to reveal his full name.

“Our contract is renewed every two to three years. We would love to renew our contract, but we do not know if the FEHD will offer us a renewal in June,” he says.

The FEHD announced in May 2021 that Fo Tan’s East and West Cooked Food Markets would be fully closed by 2024. The government plans to construct a new government complex at Shan Mei Street in Fo Tan, which is about 60 metres away from the cooked food markets.

According to a joint response from the Government Property Agency (GPA) and the FEHD to questions raised by the Sha Tin District Council in January 2022, stalls at Fo Tan’s East and West Cooked Food Markets would not be relocated to the new government complex, citing that there are plenty of restaurants for workers and residents to choose from in that area.

The new government complex will mainly be used for “recreational, cultural, medical and health, social welfare and education facilities, government offices and car parks”, according to GPA’s response to Legislative Council member Michael Lee Chun-keung in May 2022.

But the government building’s plan was not revealed to Jerry during his meeting with FEHD officers.

“Stall owners do not have much say if the government decides they no longer need dai pai dongs when chain restaurants are opening across the city. It is completely out of our control. It is true that we are not as tech-savvy as chain restaurants. We do not have digital ordering systems, but I think we still have an edge,” Jerry says.

“Students from the Chinese University of Hong Kong (CUHK) often come during orientation camps and ‘dem beat’ (perform chants) in the open space nearby. You don’t get to do that at regular restaurants because they’re usually more restrictive. Our food also tastes better than chain restaurants because of the ‘wok hei’,” he says, referring to the smoky flavours of dishes that can only be achieved by cooking under intense heat with a cooking wok.

“Dai pai dongs are freer than indoor restaurants. There is more interaction between customers and stall owners than chain restaurants,” says Chong, who is a research associate at the Hong Kong Institute of Asia-Pacific Studies in CUHK.

This site uses Akismet to reduce spam. Learn how your comment data is processed.