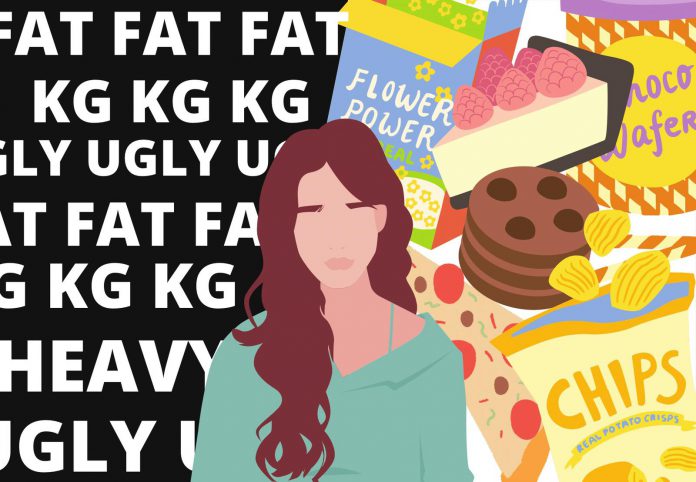 What is bulimia and how to break free from the negative relationship with food?

Yuki Chan* has struggled with bulimia for five years. “Sometimes I eat a very normal portion, but sometimes I eat two to three packs of family-size chips or three to four plates of buffet in one go,” she says.

During her teenage years, the now-19-year-old, had totally no idea of what she was undergoing.

“My biology textbook in secondary school only taught us what anorexia is but not bulimia. Most people do not exactly know what bulimia entails,” she says.

“Most people do not exactly know what bulimia entails.”

Patients suffering from bulimia nervosa, a form of eating disorder, are preoccupied with food and lose control over eating.

Binge-eating is often followed by compensatory behaviours including excessive exercises, purging, using laxatives or even starvation, in order to undo the overeating.

Chan thinks few in Hong Kong know about bulimia because it is hard to notice and diagnose.

“For bulimia, when you binge-eat, people just think you are hungry or love food, they cannot tell if it is an eating disorder,” she says.

Chan makes herself vomit to get rid of the foods that may cause her to gain weight every time after she binge eats. “The purging part of bulimia is often hidden. We do not purge in front of others,” she says.

Daisy Wu, centre in charge of the Hong Kong Eating Disorder Association says the cycle of bingeing and purging takes a toll on a patient’s health.

“Self-induced vomiting brings stomach acids up into the mouth. If this happens frequently, it can damage teeth and erode enamel. Apart from oral health problems, patients may also suffer from stomach pain and sore throat,” she says.

“Self-induced vomiting brings stomach acids up into the mouth. If this happens frequently, it can damage teeth and erode enamel.”

While bulimia is being overlooked in the city, Wu warns that bulimia could be deadly.

“Frequent vomiting can lead to extreme electrolyte imbalance, causing heart failure, which may lead to sudden death,” she says.

Amid the pandemic, the association says more people are using their hotline service.

“Patients are preoccupied with food all the time. They usually eat normal portions when they are with friends and family. But when they are alone, they crave for food and binge-eat,” Wu says.

The forced closure of gyms and fitness centres due to the pandemic has worsened the condition of bulimia patients.

“We have a patient who used to do four to five hours of high intensity exercise every day. When gyms were closed, she was very depressed and even developed suicidal thoughts,” the counsellor says.

“Hopeless and dispirited, the patient quit her job and rented a studio to hide herself. She fell into the vicious cycle of binge-eating and exercising again,” she adds.

Wu says despite the fact that patients want to break free from the negative relationship with food, the road to recovery is tough.

“Many of them think they can handle the situation by themselves, so they do not seek help until their bulimic behaviors worsen,” she says.

“During the early stage, patients deny having problems and are often unwilling to change. But they eventually develop a proactive approach to change their behaviours. In the gradual change process, patients inevitably experience relapse,” Wu says.

“It really involves a substantial commitment of time, effort, and emotion to recover,” she adds.

Wu warns family and friends should avoid persuading patients to change their behaviours.

“This approach makes them feel being attacked and may make them hide their eating problem. Patients are very sensitive to labels of ‘being sick’ or ‘being abnormal’. It still makes some of my clients feel agitated and tearful when they talk about what they have experienced,” Wu says.

Echoing the counsellor, Leanne Wu, both a physiotherapist and an ex-bulimia patient said she felt ashamed of her eating disorder history.

“I didn’t tell anyone because I felt so ashamed and disgusting. I didn’t want anyone to know my binge and purge habit,” she says.

“I didn’t tell anyone because I felt so ashamed and disgusting. I didn’t want anyone to know my binge and purge habit.”

The causes of bulimia vary from person to person. It could be due to high stress levels, difficult life experiences, physical and mental health problems, low self-esteem, or even social pressure towards thinness, according to the Hong Kong Eating Disorder Association.

For Leanne Wu, her bulimic behaviors in the past seven years were mainly related to her body image.

“I was being laughed at with my thick thighs. I always thought I was not thin enough even though I was actually within the normal weight range. But I couldn’t help comparing my weight and body shape with other girls,” she says.

Feeling inferior and unconfident, Leanne Wu tried different ways to lose weight.  “I used to take slimming pills. But I became so weak that there was even a time when I fainted while riding a bike,” she recalls.

“I was only in my twenties at that time, when I should be vivacious and healthy. This was when I felt a strong urge to improve my health,” Leanne Wu says.

But the physiologist says her mentality did not change much – the fear of gaining weight or getting fat still haunted her at that time.

The second turning point came when Leanne Wu started to learn about weight training after her university graduation.

“Weight training plays an essential role in my recovery and I found it really fun. To get a better body shape and build more muscles, I even did research about nutrition and learnt more about healthy eating,” the fitness nutrition specialist says.

Leanne Wu also took other practical steps to change her unhealthy routines and keep track of her recovery progress.

“I wrote diaries to take a record of dates and time I overate, what I ate and drank, where I was and how I felt after binge-eating. This helped remind me how much pain and torture I suffered because of bulimia and stopped me from falling into the cycle again,” she says.

To inspire others with her experience, she started a YouTube channel to share her bulimia story in 2019. She also films contents related to nutrition, fitness and healthy lifestyle.

“I learnt about the concept of self-love from other ex-bulimia patients, and now I want to be an inspiration for others as well,” she says.