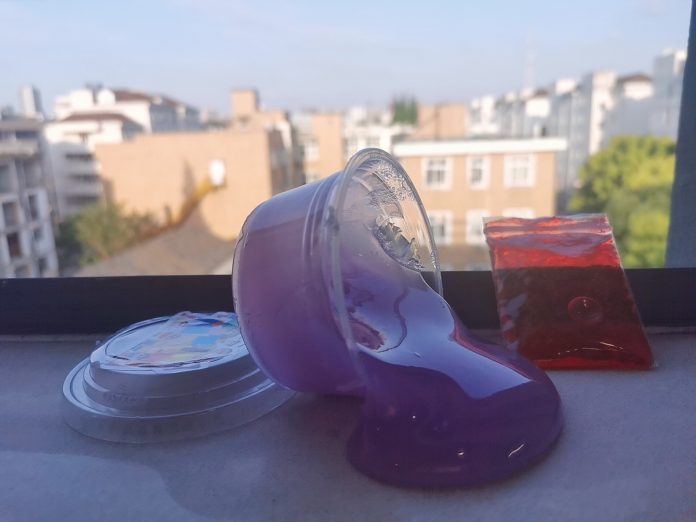 Many young people in China play slime to ease stress during the pandemic.

Su Jinyue loves playing with slime during the pandemic so much that she now owns an online shop selling her favorite toy.

The Year Two university student watches online videos more often, as she stays home more during the epidemic. After watching a video of playing with slime in January 2020, she bought a litre of slime and fell in love with this slimy toy.

Su soon started filming and uploading slime videos to Kwai, one of the popular short video platforms in China. She has more than 3,600 followers so far.

“More people have learnt about slime during the epidemic because many have time to watch videos and get to know slime,” she says.

“I want to let my fans play with my homemade slime. I also have a few friends who play with slime. If my friends like my slime, I will give them some for free,” Su says.

Opening a store is a busy and tough job. Her business has also been affected by the epidemic.

“Due to the pandemic, express delivery is restricted in some high-risk areas. This has affected my business,” Su says.

The general process of making slime is to proportionally mix glue, glycerin and foaming agent. Then pour borax water several times and stretch the glue until it is shaped.

Su usually experiments with different types and proportions of glue before putting her products up for sale. She usually uses five litres of slime to make one slime product.

It takes Su a day to turn glue into a five-litre slime product. After that, she will let it rest for 10 days to eliminate the bubbles inside. Now she spends two hours a day playing with and making slime.

“During the production process, I need to stretch, roll, and poke the slime all the time, which makes my arm very sore. After making slime, I often have backache,” Su says.

“During the production process, I need to stretch, roll, and poke the slime all the time, which makes my arm very sore. After making slime, I often have backache.”

“I don’t sell slime at a fixed time. I make slime less often when I go to school, maybe only once a term. Because of the epidemic, I have more time at home to research how to develop new slime products,” she adds.

Play with slime at home

Han Zitong, a 17-year-old high school student, has also become a slime fan for one year during the epidemic.

Han bought three cans of slime online. Then she became a slime lover and now she plays with slime for an hour every day.

“There is nothing like slime that can be stretched and has a variety of textures, and they are beautiful,” Han says.

“There is nothing like slime that can be stretched and has a variety of textures, and they are beautiful.”

Han buys raw materials online to make slime. She thinks she can save money by doing it herself compared to buying finished products. She also sells second-hand slime or exchanges with others to reduce costs. So far, she has spent more than RMB ¥1,000 (USD $153.72) on slime.

Han’s first attempt was unsuccessful, and her hands were covered with glue. She made a small piece of slime the second time, but Han thought that little success made her feel very happy.

“Playing with slime is quite relaxing. It helps me get rid of boredom brought by the epidemic. Usually, at night, I rub slime when I have nothing to do,” she says.

Another slime fan, Zeng Zishan, says slime helps ease her pressure from her studies during the epidemic.

“I can hold slime when writing papers, and that eases my pressure,” the anthropology major student says.

Zeng has also tried making slime at home many times. But her family does not like her hobby.

The senior enthusiast has five cases of slime, and she cannot count how many cans she has now. “I used to play with slime at school, but I had to play at home during the epidemic. My family scolded me when they knew I had bought so much slime,” Zeng says.

“My family does not like the smell of slime. It is too pungent ， and the formaldehyde in the glue is harmful,” she says.

Because of this, Zeng only buys high-quality glue from reliable sellers. Now she rarely makes slime at home by herself.

Zheng Bo, professor of chemistry at The Chinese University of Hong Kong, reminds slime players to be cautious when playing with slime, which can cause skin or eye irritation.

“Borax is not very toxic, but exposure to the material can irritate the skin or eyes. For adults, a relatively large amount of borax, say about 10 to 25 grams, will be considered toxic exposure,” Zheng says.

Chen Fenggang, the attending doctor in the emergency department of Shizong People’s Hospital, says exposure to high concentrations of formaldehyde can cause damage to eyes, skin and other organs.“Be aware of mild poisoning symptoms including dizziness, headache, nausea, and fatigue,” Cheng says.