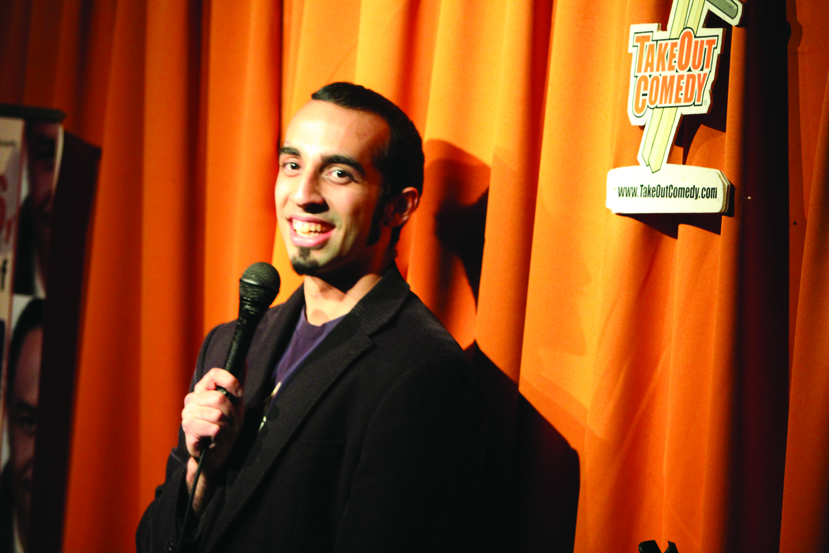 Gong says he has loved telling jokes and making others laugh since he was young. “It is my destiny, my calling,” he exclaims, looking upwards with arms opened wide. He grew up watching American comedian Johnny Carson on “The Tonight Show” and was amazed at how Carson could make him and millions of others laugh just by talking about everyday topics. The show inspired Gong to become a comedian.
After quitting a career in retail management to pursue his passion for comedy, Gong worked as a stand-up comedian based in New York. He came to Hong Kong in 2006 with a mission to create a local comedy scene.
The TakeOut Comedy Club showcases both English and Chinese stand-up comedy but the style is closer to American stand-up than the performances of homegrown artistes like Dayo Wong Tze-wah. Here, the comics share an intimate space with a small audience, rather than play to large theatres. The shows also feature more audience interaction, with each comedian having less than 10 minutes to perform on stage.
According to Gong, comedy clubs are popular because they help to relieve stress. “Laughing helps improve blood circulation too,” he says.
Gong hopes to bring more laughter into Hong Kong people’s lives and thinks the best way to do that is to introduce stand-up comedy to the locals. “The expatriates already know what stand-up comedy is. They know they have to laugh out loud,” Gong explains. Before each Chinese show begins, Gong never fails to encourage the audience to laugh out loud instead of hiding their laughter. “We want Hong Kong people to realise the power of laughter.”
Nonetheless, he understands that in Chinese “culture” laughing in public is regarded as something to be embarrassed about. Pointing to a corner of the room, he says, “We had one show last week with a couple sitting over there. The girl was laughing so hard “hahahahaha” but her boyfriend was like “shhhhh” (Gong puts his finger to his lips) during the show. We saw it. We want to get people to see that it’s okay to laugh out loud.”
Although Gong wants to get the locals laughing out loud on a regular basis, TOC only showcases Chinese stand-ups once a month. “We don’t have big enough audiences or comedians to do that more than once a month, not yet,” Gong explains.
Live comedy shows are still quite new in Hong Kong but Gong is confident about the outlook for the business. “We’re hitting an untapped market and we have untapped materials that we can talk about on stage where you can relate with us. With a large market of seven million Chinese people, we hope to have Chinese shows every day. We hope to open up comedy clubs in Mongkok, Kowloon. Why not?”
Apart from his comedy shows, Gong gets invited to perform at schools and private events. “Now companies hire us for special shows, their parties as well. So, from the business standpoint, you can make money by being funny,” he says.
Gong has a positive mindset, even when it comes to disappointments and failures. “You will fail, but you will fail to succeed,” he says and strongly advises people to “just do it”.
This is exactly what Vivek Mahbubani did when he saw that TOC was organising a stand-up comedy competition three years ago.