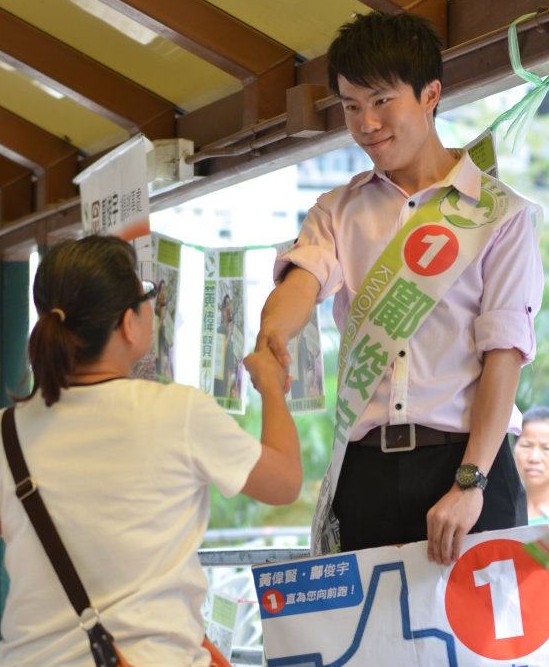 Roy Kwong Chun-yu sits in a small cramped office that he shares with his two assistants on the ground floor of a residential block in a public housing estate in Yuen Long. There is nothing fancy about his surroundings, but Kwong is happy to be serving in his second term as a Democratic Party district councillor.

Kwong hit the headlines in 2007 as a 24-year-old who beat the incumbent from the pro-Beijing Democratic Alliance for the Betterment and Progress of Hong Kong (DAB) in the safe DAB seat of Pek Long. It was a David and Goliath story; the hip-hop dancing kid from the block versus the old-timer with the vast party machinery behind him.

Now as then, Kwong says he does not receive much assistance from his party. For instance, he writes and designs a local newspaper for his constituents which he then prints and delivers himself. But he insists the lack of resources should not be an obstacle.

“You can only sigh that you don’t have a rich father,” says Kwong. “But I believe many great people in the world were born in grass-roots families. I feel that the more grass-roots a place is, the more likely it is to produce a new leader.”

The pro-business Liberal Party once offered Kwong a higher salary to work for them but he turned it down.

“It’s easy to tell whether you are working for a belief or for money. A politician needs to have backbone. You can’t switch sides for money. I would rather strive harder, have a smaller office, be poorer than give up on my aspirations,” Kwong says.

For the boy who grew up on the estate he now serves, Kwong’s story has been a successful one so far.

But pursuing politics as a career remains an uncertain and risky prospect for young people. Compared with established democracies, elected career politicians is a relatively new phenomenon in Hong Kong.