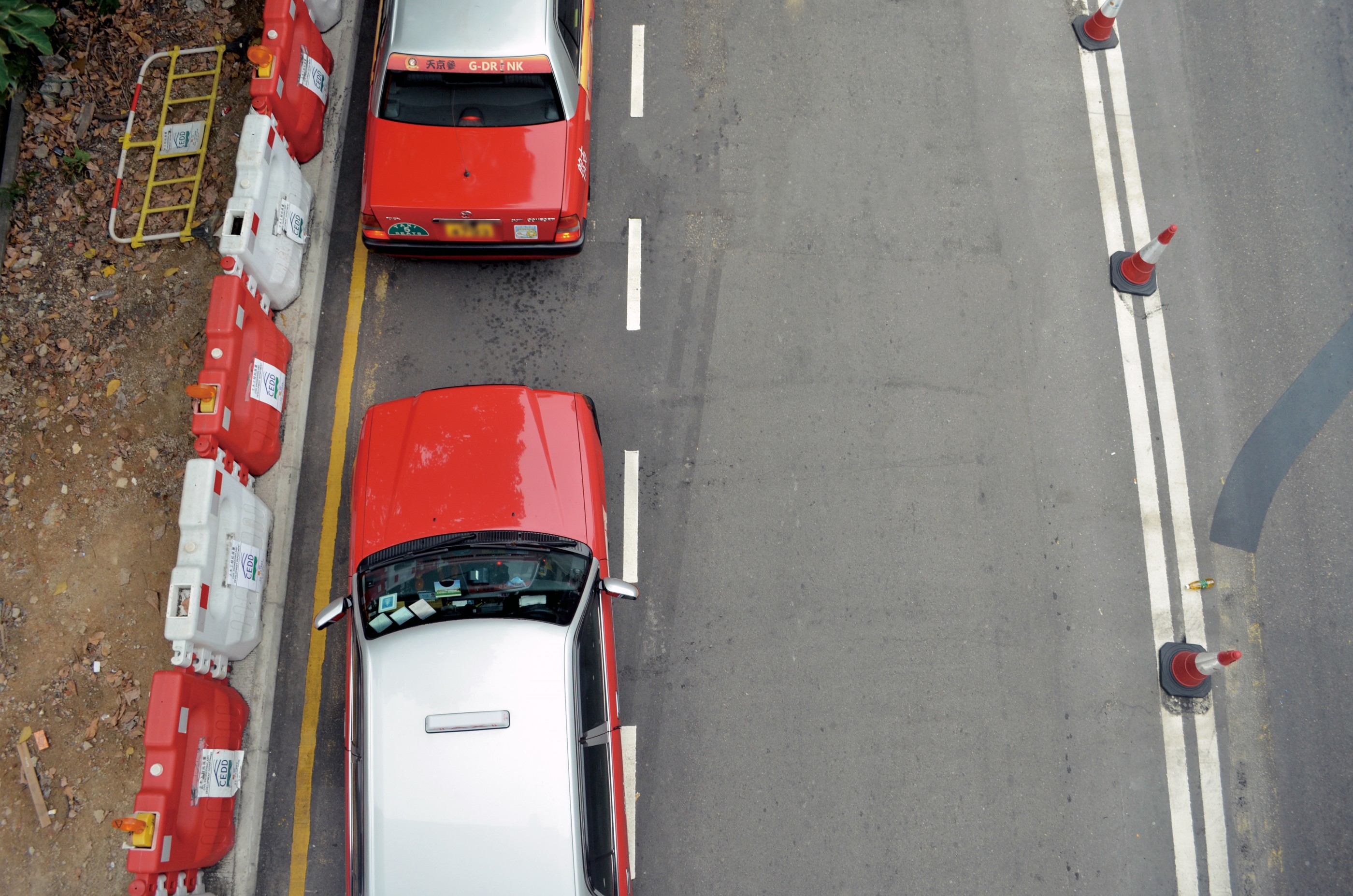 The ups and downs of a taxi-driving career

by Godric Leung and Angel Liu

Just as the evening peak hour arrives, a line of red taxis edges slowly forward on a narrow street near the hustle and bustle of Gloucester Road in Wan Chai. They are waiting to fill-up at a gas station on Marsh Road, a spot marks the end and the beginning of the taxi drivers’ day.

Lo is one of the cabbies stuck in the line. For him, it has been a day like any other, the same routine, the same stiffness in the body after hours of driving and waiting in the queue.

“It’s already better at this time of day,” Lo says as he jumps out of his car with a cloth in his hand. He cleans the car the while he waits in the queue. “There are a lot more taxis queuing up at around 3 or 4 o’clock.”

The Marsh Road gas station is one of 12 Dedicated Liquefied Petroleum Gas (LPG) Refill Sites in Hong Kong that serve the 18,000 taxis and 2,000 minibuses across the territory. Although LPG is also available at 51 other commercial petrol stations, prices there are usually HK$6-$7 higher per refill than at the Dedicated LPG Refill Sites. Therefore, drivers of most of the LPG vehicles would rather spend 30-40 minutes queuing for cheaper fuel.

Lo recalls that before switching from diesel to LPG, taxis seldom needed to queue for fuel. They could just fill their tanks at any nearby petrol station. But with just one LPG filling station in the urban district of Hong Kong Island, taxi and minibus drivers have to sacrifice their income to refuel. “This is definitely a failure of the Government,” Lo complains.

For taxi drivers who rent their taxis, there are usually two shifts in a day, the morning shift starts at around 5 a.m. and ends 12 hours later, while the night shift is the opposite way around. Before handing over the taxi for the next shift, the driver has to fill up the tank. This is why there is always a long queue before the night shift starts

According to government statistics, there are currently around 50,000 taxi drivers in active service. Some of them are driving their own cars but most rent from a taxi owner by paying a daily rent of around HK$400 for one shift. Apart from the fuel price and car rental, the income is directly pocketed by the drivers. In other words, the harder a driver works, the more he or she can earn.

However, in reality, there are obstacles to this. Chan Man-kin, 35, became a cabbie in 2001. He says the profit margin of driving a taxi is narrowing because of rising fuel prices in the past 10 years. Since he started, the price of LPG has shot up from HK$1.65 to HK$6.21 per litre. Given the rising overheads, he can now earn around $500 a day.

“Sometimes the total of the rental fee and the fuel already exceeds half of my earnings,” Chan says.

On top of increasing operating costs, income has also been hit by increased traffic congestion on Hong Kong’s roads. In 2011, the Transport Department calculated a taxi driver could serve 26 customers in a working session; this year, a taxi driver can only serve 21 customers.

Apart from the decreasing profit margin, taxi drivers face the constant risk of road accidents. If there is a minor accident, a taxi driver might have to pay compensation and money to repair damage to his car, but if there are casualties, the driver may face legal liability and even imprisonment.

In many of the accidents, long working hours are a factor. Chan says it is common for taxi drivers who own their cabs to drive continuously for 24 to 36 hours. Some of the drivers who want to save money on accommodation even sleep in their cab and work soon after they wake up. Chan admits that after he has been driving for more than 12 hours, his alertness and awareness drop. “I feel like sleeping all the time,” he says.

The irregular work schedule also affects drivers’ relations with friends and family. Chan says it is difficult to maintain a relationship when he lives in a different time zone from his partner. Chan is single now and says he is not able to date anyone much like many of his peers who work the night shift.

On top of the practical and emotional difficulties, taxi drivers have to put up with the perception among many members of the public that taxi driving is an inferior job.

Lam Ho Luk, a 23-year-old university graduate once spent seven months as a part-time cab driver and another two months driving full time before he quit. He says most of his passengers were surprised to find such a young man behind the wheel. When they found out he was also a university student, nearly all of them asked him why he was driving a taxi.

“I could feel from their tone and expression that they thought this job was only for older people, and those who are forced to become taxi drivers because they have nothing else to choose,” Lam says.

However, in Lam’s opinion, there is nothing demeaning or lowly about the job. Lam thinks it is not a disgrace to be a taxi driver but, after finding a better job as a design engineer, he left the field.

Despite the difficulties, there are still people who like the job and are positive about it.

Lui Cheung-hong, 30, who started to drive a taxi in 2009, enjoys the freedom it brings. “It is really free to be a taxi driver. Even if you want to go travelling, you do not have to be afraid you don’t have any holiday days,” he says, “I just have to tell the owner [of the taxi], which days I can’t work and then nothing will be my business.”

Conversely for Lui, being a taxi driver has given him more private time to spend with his family. Although he has to wake up at 5:45 every morning, he can have a better work-life balance.

Lui’s love for taxis actually goes back to his childhood. He has wanted to drive taxis since he was in kindergarten. This is because his father, who was also a taxi driver, drove him back home from school every day. “I loved taking my dad’s taxi ride and I also love driving,” he says with a smile.

But not just any kind of driving job will do, only taxi driving gives him satisfaction. “If I were a bus driver, I would be bored because I would just drive the same route every day,” he says.

Yet, cabbies do need to worry about their health. In order to earn more, a taxi driver usually eats in the cab, or sometimes skips a meal or two, or avoids going to the washroom too often. Being seated with hands on the steering wheel in the same position for too long can lead to occupational disorders such as back pain and adhesive capsulitis, commonly known as frozen shoulder. The condition results in restricted shoulder movements and constant pain. The pain gets worse in colder weather, making simple movements of the shoulder impossible.

The lack of exercise can also lead to weight problems. “I’ve been a taxi driver for four years but I’ve gained nearly 20 pounds,” Lui says. When he worked as a clerk, he could at least walk around. Now, he barely leaves his seat except when he goes to the toilet or takes a meal break.

But Lui says he will not give up on taxi driving. Although it is a tough job, he can at least earn a living to support his family and he has job satisfaction. During each journey, he can chat with passengers from different cultural backgrounds. He finds that mainlanders seldom discuss politics—but they are keen on comparing Hong Kong and the Mainland—while Taiwanese and Singaporeans like to criticise their governments and share their viewpoints.

And then there is the satisfaction of helping people. A couple of years ago, when other taxi drivers refused to help, Lui transported a woman in Tsuen Wan who was in labour to hospital.

He remains upbeat about the the future for taxi drivers. With the increase in mainland tourists under the Individual Visit Scheme, demand for taxis has risen. In the past, few people took taxis at around 10 a.m. to 11 a.m. but now there are many passengers even during off-peak hours. “It lengthens the time I can get income,” says Lui.

Still, he says that if he had children, he would not recommend they become taxi drivers because there are no prospects for promotion. A clerk can always hope to become a manager but the only way to step up in the taxi world is to become an owner.

This is just a fantasy for Lui. The Hong Kong government has not issued any new taxi licences since 1994 and investors, wary of fluctuating stock prices and government measures to cool the property market, have jumped into the secondary taxi licence market.

Speculation has driven up prices. “A taxi licence costs HK$7 million,” says Lui. “Four years ago, when a taxi license cost around HK$3-4 million, I had thought of being a taxi owner but now it’s impossible.”

Bidding a Green Farewell to Life