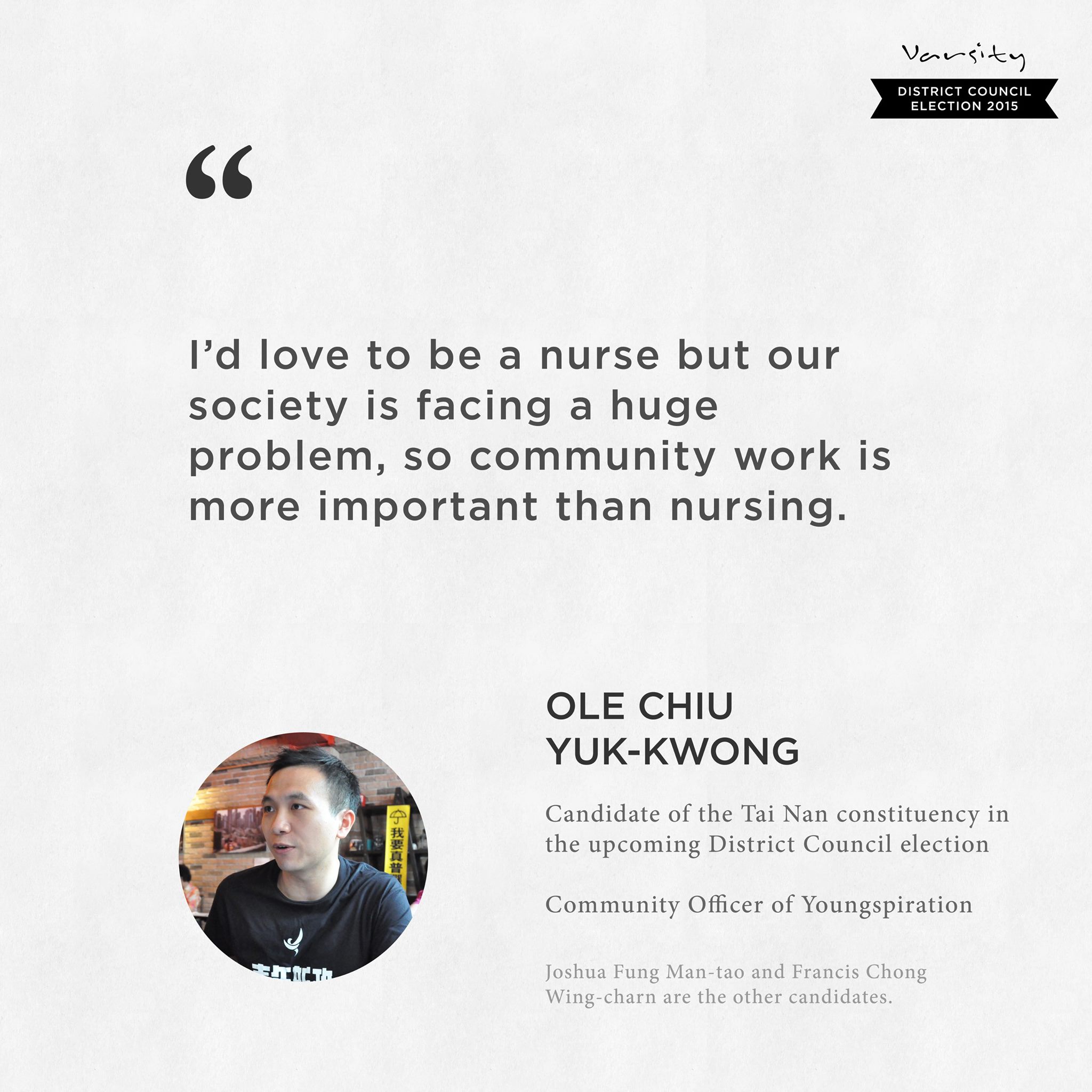 Ole Chiu of Youngspiration plans to serve the community as a district councilor rather than a nurse, despite strong opposition from other parties.

Full-time nurse Ole Chiu Yuk-kwong finishes work at the North District Hospital in Sheung Shui, then spends two hours rushing to Mongkok to campaign for his bid for a district council seat. Then it is another two hour journey from Mongkok back to his home in Tuen Mun. This has become Chiu’s routine for the past two months.

Campaigning is all he does other than work, which leaves him with only four to five hours of rest a day.

“I rest when I’m going from one place to another,” says Chiu.

Despite living in Tuen Mun, Chiu, who is a Community Officer of the newly formed political group Youngspiration, is running to represent the Tai Nan Constituency in Mong Kok. Youngspiration is fielding nine candidates for the 2015 District Council Elections and three of them are competing in the Yau Tsim Mong District.

Chiu explains the district is traditionally a stronghold of the pro-government, pro-Beijing camp, but the pan-democrats have not invested enough in campaigning in this district because they are unlikely to win. Chiu and his group say this leaves residents in the district with no choice but to vote for the pro-government camp.

Back then, the pan-democracy camp pulled off a great victory due to strong opposition to the proposed Basic Law Article 23, the controversial national security law.  Chiu says crucial issues like Article 23 will bring out people who usually do not  bother to vote.

Chiu is hopeful that what happened in 2003 will happen again this Sunday for the district council elections. “If the turnout rate reaches 50 per cent, half of our group of nine candidates stand a chance of winning,” says Chiu. The turnout rate in last District Council Election in 2007 was 41 per cent.

Chiu says he would quit his present job as a nurse and become a full time district councillor if he is elected. Although being a nurse is more stable and has a higher salary, Chiu says people need to think about more than just money.

“I’d love to be a nurse but our society is facing a huge problem, so community work is more important than nursing.”

Joshua Fung Man-tao and Francis Chong Wing-charn are the other two candidates for the Tai Nan Constituency.