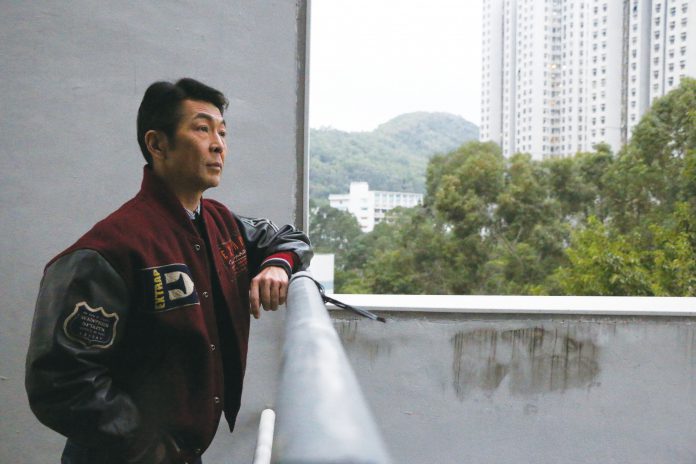 Leung Kin-ping never set out to be an actor, never dreamed of setting the stage or screen ablaze. But over the course of a nearly 30-year career, he has cultivated an exacting love for his craft.

There is no movie star aura yet the man with the gentle voice, wearing blue jeans, red jacket and sneakers does immediately strike you as someone you recognise from a television drama even if you cannot name him. If you have seen the surprise hit independent movie Ten Years, which is made up of five short films, you may instantly recognise him as the taxi driver in the Dialect segment.

Leung is known in Hong Kong as a “green leaf” or evergreen actor, one recognised for playing supporting parts rather than the lead. He has even been called “King of Green Leaves”. Leung takes the label in his stride, “I think it is just a way of complimenting,” Leung says. “Thanks a lot!”

Now 55 years old, Leung entered the television industry during the golden age of Hong Kong’s movie and television output. He grew up at a time when watching television was the most common form of entertainment and, as a child, he was captivated by the stories about TV and movie stars.

Without a higher diploma and with limited employment options, Leung was driven by his childhood fantasy to enter the entertainment business.

He first worked as a photo printer in Shaw Brother Pictures Limited, then a public relations officer, and finally became an actor with Television Broadcasts Limited (TVB) in 1986.

Leung says he cultivated his interest in acting gradually through the decades while making a living from it. He compares this to a child who is pushed by his parents to play the piano and only realises the beauty of performance after years and years of practice.

Right from the start, he set himself a simple goal – to keep on improving. For the first 12 years, he felt satisfied with the small improvements he made every year. But when the 13th year came around, he panicked and found himself stuck because of what he describes as TVB’s rigid structure and lack of innovation.

In recent years, many local viewers, especially the younger ones, have complained about TVB programmes for their hackneyed and repetitive storylines, unrealistic plots and careless onscreen mistakes. Many have deserted the station’s dramas and turned to Korean or American television series instead.

Just as viewers are bored, it turns out the actors are bored too, except unlike Leung, few of them are prepared to say it publicly.

Leung says it was difficult to create any chemistry with his acting partners on TVB shoots because everything was so familiar. He usually simulates scenes in his head before shooting and he found his predictions were 90 per cent correct when the shoot began. “I know the facial expression and pace he [the character] will use.” Leung says with a bitter smile, “There is no surprise.”

Leung bluntly states that the main problem with the Hong Kong television industry is the lack of competition. “No competition, no improvement,” he says. TVB’s monopoly is leading to market shrinkage and saturation, and the consequence is a lack of new blood and fresh ideas.

Leung hints that the television industry has reverted to the situation in 1960s, when the only newcomers in the industry were the poor and the rich. That is, people who either had no other choice of career or did not have the pressure of making a living. In any case, since the market is shrinking, most production teams prefer to choose experienced actors over new actors.

The moribund situation was shaken up when Ricky Wong Wai-kay prepared to launch Hong Kong Television Network Limited (HKTV) in 2012. By investing in edgy local drama, HKTV opened Hong Kong viewers’ eyes to the possibility of having different genres of television series, such as political dramas, musical dramas, superhero action comedies and more. It was a radical departure from the medical and crime dramas that are TVB mainstays.

Leung quit TVB for HKTV in 2012, but there was nothing romantic about his decision.

“I just moved for a higher salary,” he says. “We are not stars. It is difficult to survive in this industry.”

Leung describes himself as “farmer in the performance industry”, one who faces a similar predicament as a real farmer. They both invest a lot of effort to produce a product and sell it to some large companies. The companies earn a lot with the product, but give just a little back to the farmers.

Despite high hopes, HKTV ultimately failed to win a domestic free-to-air television license. But rather than fade away, Leung’s career took other unexpected turns.

In 2014, a short film he starred in, The Tricycle Thief, was nominated for Best International Short Film in the Toronto Film Festival. Then, last year he gained local acclaim for his performances in an episode of RTHK’s  Below the Lion Rock 2015 and the sleeper hit Ten Years.

Playing a recycling truck driver called Go Gor in the former programme, Leung struck a chord with many Hongkongers in his portrayal of the grassroots’ struggle to get by.

Leung believes actors’ performances can only resonate with the audience when they are true to life. To play Go Gor, Leung sat in his car every day to observe a ragman on the other side of the street for hours just to learn his style and posture.

The same realistic performance also brought him a lot of praise for Ten Years.

The dystopian film is a surreal imagination of what Hong Kong will be like in a decade’s time. Local heritage and culture is disappearing, conspiracies abound, citizens are oppressed by censorship and coercion and Cantonese is vanishing. The themes all reflect current controversies in Hong Kong. Many audiences see Ten Years as a prophecy.

But to Leung, the movie is just a “logical deduction.” He sees it as a reflection of people’s thoughts today. “People feel worried and anxious about the current situation in Hong Kong,” he says. “They express this through the movie. That is normal.”

Asked if he was worried that his participation in Ten Years might lead to his being banned in the Mainland, Leung laughs. “No. Who can escape from the political?” He thinks people should try to understand the political concerns and thoughts that are behind Ten Years.

Leung has two daughters and he does not want them to live in a world where they cannot speak freely. “The most precious thing in Hong Kong is freedom. We cannot lose freedom of speech,” he says.

Looking ahead, Leung is uncertain about his future. He does not know what challenges or opportunities will be in front of him. The only thing he knows is that he hopes to tackle new challenges in 2016.

“For other careers, you have to retire at the age of 60,” he says, “But   being an actor, you can act as long as you can still walk, think and talk.”