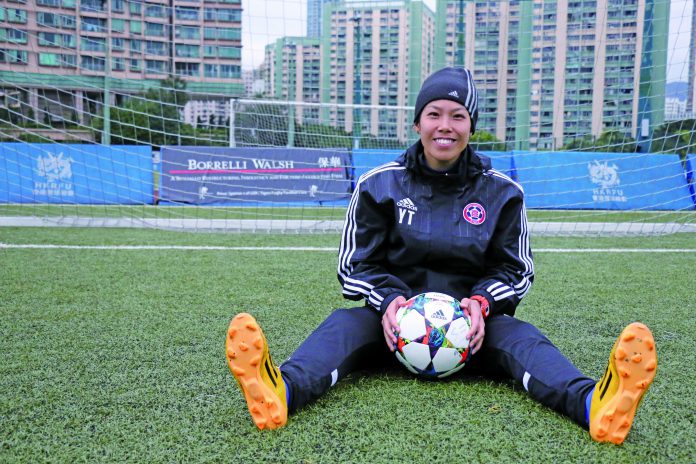 The first woman to lead a top-flight Hong Kong side, Chan Yuen-ting blazes a new trail in the men’s football world

It may just be a practice match for training but the men on the pitch are intent on winning. The football bangs into a goal post before the whistle blows. The rivalry is immediately tossed aside as the men gather together in the centre circle. After all, they are teammates and in their midst is a young woman, patting the players on their backs.

She is Chan Yuen-ting, nicknamed Beefball for her insistent personality, and she is head coach of the local top flight football side Eastern Sports Club. At the age of 27, Chan is both the first female head coach of a men’s team in the Hong Kong Premier League and the league’s youngest head coach.

It may seem surprising that the macho world of professional men’s football would accept a young woman as team boss. Indeed, reactions were mixed when Chan was appointed to succeed Yeung Ching-kwong, who moved to become assistant coach of the Meizhou Hakka F.C. in December last year. But Leung Shou-chi, Eastern’s Executive Director and a veteran in the game, says giving Chan the job was a no-brainer.

“I took one minute to decide (appointment of Chan),” says Leung. He adds that Chan was the only candidate for the job who possessed the Asian Football Confederation’s “A” Coaching Certificate.

Chan is an undisputed rising star in local football. Before joining Eastern, she was assistant coach at Hong Kong Pegasus FC and Southern District. At Pegasus, she was also a data analyst. The promotion to the top job at one of Hong Kong’s leading teams brings great pressure for the rookie head coach, but so far the signs are good.

“I am so surprised that the players support me very much and we just won the [Senior Challenge] Shield,” says Chan. She believes the victory was possible because they pulled together as a team despite the changes in personnel.

Chan’s extraordinary journey started from a youth summer scheme for football which she joined for fun. It was the summer before she entered secondary four but she can still recall her first touch of the ball.“(The first time) playing football, I can remember it well… It was on a concrete pitch in Sha Tin. That was how I started playing football and then coaching up till now.”

“Actually, I think it was kind of love at first sight,” says Chan, reflecting on the early days of her enthusiasm for football. “At the beginning, I adored David Beckham very much, so I started watching football matches. Then, I felt football seemed to be fun to play and so I applied for that scheme to learn how to play football.”

Chan says her early playing days went well and her passion for the game grew. She believes her natural ability may have helped her to develop a long-term interest in football. “Maybe I was an innate sportswoman, so I started well. It was because I started well, playing football gave me a sense of achievement,” she says. The joy she gets from football continuously drives Chan to devote her time and efforts into the sport for the decade since her first kick of the ball.