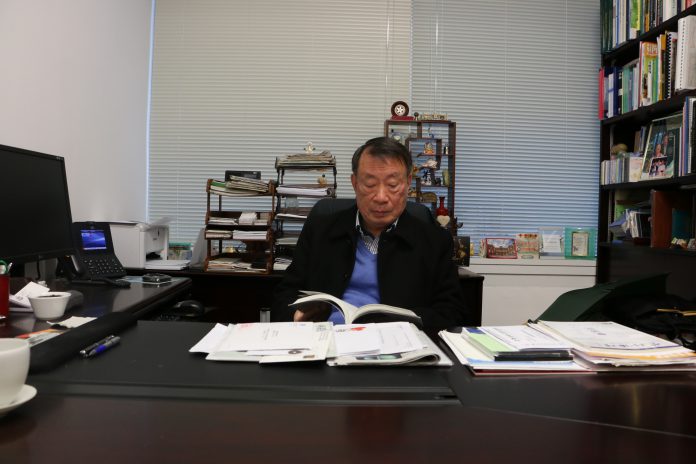 After devoting close to 50 years to practising social work and studying social welfare policies, 69-year-old Nelson Chow Wing-sun, an emeritus professor at the University of Hong Kong, could be forgiven for sitting back and enjoying his retirement.

Instead, he is sitting in his office and writing at his vintage redwood desk opposite a wall where a piece of Chinese calligraphy hangs. “When the great way prevails, the world is equally shared by all,” it reads.

It is a theme that resonates with Chow, who grew up poor, the youngest of six children in a cramped tenement flat his family shared with others. He managed to get into an elite school and then the University of Hong Kong (HKU) at a time when most people were lucky to finish their secondary education, but these early experiences stayed with him.

The social sciences faculty did not exist when Chow entered HKU and he joined the Faculty of Arts. But his interest in social issues led him to study sociology and politics courses as well. The 1967 riots broke out during his first year, followed by a period of social reform initiated by the colonial government. All these developments spurred Chow’s interest in social issues and policy.

After graduation, Chow got a post-graduate diploma in social work and worked as a probation officer for two years before returning to post-graduate study and academia.

As a scholar, Chow has become one of the city’s most respected social work experts and a leading figure on the study of poverty in Hong Kong. He has been invited to sit on numerous advisory bodies and committees and helped the government to conduct major research on social welfare. One such project, in 1983, led him to come up with Hong Kong’s first index for measuring poverty, commonly referred to as the “poverty line.”

One area of social welfare that has always occupied Chow’s attention and interest is the welfare of the elderly. So it is unsurprising that in 2013 the government would turn to him to write a report reviewing and outlining different approaches for a pension scheme for Hong Kong.

Chow, who retired from his teaching post that year, spent a year with his team of researchers examining six proposals. They finally came up with a universal pension plan that would allow elderly people aged 65 or above to receive a non-means-tested sum of HK$3,000 a month.

However, when the government put forward two proposals for public consultation in 2015, it made it clear which one it was backing. It labelled Chow’s universal option the “regardless of rich or poor” approach. Meanwhile, the second approach was called the “those with financial need” approach. Under this plan a monthly pension of HK$3,230 a month would be paid to those aged 65 or above if they owned less than HK$80,000 worth of assets for a single person and HK$125,000 of assets for a couple.

Officials obviously favoured the latter approach, telling the public it had “reservations” about the first approach and warning it could lead to huge tax increases. They even asked if it was fair that the young should be saddled with higher taxes to support the old.

The government also jumped on Chow’s calculation method and released a financial estimate, based on population projections, of a HK$500 billion deficit by 2064.

In a move many saw as out of character for a mild-mannered moderate who had always tried to advocate from within and work with the government, Chow held his first personal press conference. He accused officials of treating him unfairly by shaping his proposal as a giveaway approach. He said the government had tried to shift support away from his proposal by twisting the truth and alarming citizens with its tax rate projections. “I was certainly disappointed,” Chow mumbles, his eyes drooping, “The government handled this case by using false facts and did not allow citizens to see the full picture.”

Not only is he disappointed, but he also feels pessimistic about Hong Kong’s future in the hands of its current government leaders.

After several conversations with the senior officials, Chow says he finds their mindset is stuck in the 1980s. “They only think about finance expenditure, instead of putting citizens’ well-being as the first priority,” he says. “This will bring disaster to Hong Kong.”

He singles out Chief Secretary for the Administration, Carrie Lam Cheng Yuet-ngor in particular. Chow’s press conference sparked a war of words with Lam, who called his proposals “unrealistic” and said some of his suggestions were “not in the appropriate attitude of a serious academic.”

Lam’s words triggered strong criticism from academics. “That is demeaning and insulting,” says Wong Yu-cheung, a social work associate professor at the Chinese University of Hong Kong and also a member of Chow’s research team. He says he finds it “bone- chilling” that the government has to resort to these tactics in order to lobby the public and argue against opposing opinions.

Wong Hung, currently an associate professor in the Department of Social Work in CUHK and Chow’s former student, describes Chow as a “gentle and honest” teacher who rarely criticised the authorities.

Wong thinks it is unfair for the government to invite Chow to write the report at the beginning and toss him aside at the end. For him, the whole affair reaffirms his belief that scholars should take more responsibility in supervising the government and stand firm in defending their stance.

That is why he led 180 scholars to boycott the government consultation and support Chow. “He is a scholar who deserves our respect,” Wong says, “The government should not denigrate Professor Chow.”

A major reason why so many academics came out to support Chow can be attributed to recognition for his dedication to studying and alleviating elderly poverty. Back in 1980, he conducted research with Wong Hung about the major types of poverty in Hong Kong. At that time, Chow could already foresee how serious the problem of Hong Kong’s aging population would be.

As part of the study, Chow interviewed elderly people who had HK$50,000 of assets at that time. Although this was not an inconsiderable sum back then, they did not dare to use their money because they did not know when they would need it for use in an emergency. “Think about it,” Chow says. “You might have 25 more years to live after you retire. How much money will you need?”

For Chow, the study of elderly poverty is not just about theory or data, but about human beings. “I think man is the most important thing,” he says. He fixes his eyes on the Chinese calligraphy on the wall and says: “For me it is worthwhile to do anything that can benefit people.”

Despite such lofty idealism, Chow does not think the meaning of “social welfare” is that everyone should enjoy equal resources. He knows there is no perfect system. But he does believe there should be a “minimum platform”. There should be policies in place to protect every citizen and ensure their basic living requirements are met.

When asked if he thinks Hong Kong has achieved this “minimum platform”, Chow immediately gives a negative answer.

He says the government does have some good policies on social welfare, but they could be better. “I think Hong Kong could satisfy all these needs.” he smiles, “The government always claimed that they do not have money. I think no one believes it.”

Given his assessment of Hong Kong’s leadership, further improvement of social welfare policies may be a challenge. Recalling his work with the government under three Chief Executives, he says Tung Chee-hwa had vision but lacked the ability to execute it while Donald Tsang Yam-kuen lacked vision. As for current Chief Executive Leung Chun-ying, Chow says he has not been impressed with either his vision or his performance in government.

He will continue to try and come up with a solution to the pension problem that might be acceptable to the government and the public. But whatever the future holds for social welfare policy in Hong Kong, Chow anticipates he will be taking a back seat. He takes a last sip of his tea and clasps the lid of his water bottle. “It is not my time any more,” he says. “I don’t have the energy any more. It is time for some rest.”