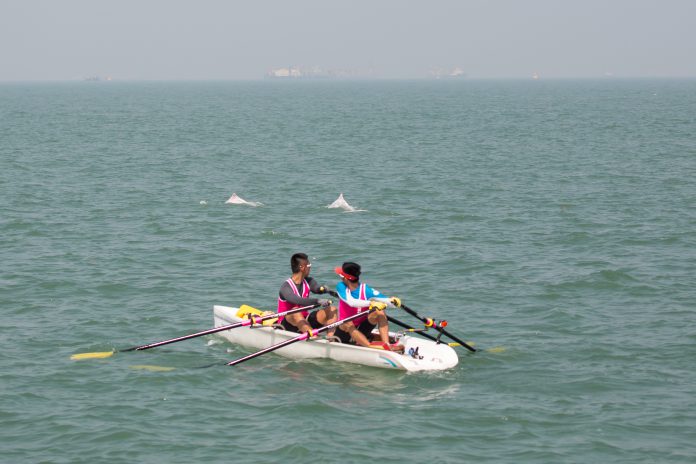 Paddling gently while standing on a board in the ocean as the sun bounces off the rippling water or lying flat on the board and floating while taking in the spectacular Sai Kung scenery – these are experiences enjoyed by an increasing number of stand-up paddle boarders in Hong Kong .

Stand-up paddle boarding (SUP) is a water sport that started in Hawaii. Here in Hong Kong, Bryan Ng Yu-fung, the founder of Hong Kong Stand Up Paddle Board Association, is trying to promote it as a way to explore the natural scenery of Hong Kong rather than a racing sport.

“We have been using it to tour around Hong Kong mainly in Sai Kung in the Geopark area,” Ng says.

His favourite spot is Bluff Island, also known as Ung Kong, in the south of the Sai Kung Peninsula. Bluff Island has one of the four biggest sea caves in the eastern waters of Hong Kong. Known as the Sea Arch, it stands 25m high in the ocean.

While SUP tours are still a relatively new way to explore Hong Kong, kayaking trips have long been a good way for people to relax and enjoy Hong Kong’s backyard. David Leung Tat-keung, a kayaking coach with over 15 years of experience, says even many elite kayak racers are constantly surprised at how different trips made along the same route can feel.

“This week it’s sunny, next week maybe it’s windy, and the following week may be foggy, the weather keeps changing,” he says. But many water-sports veterans have noticed that their marine paradise is under threat. Leung says the waters off Sai Kung are getting more polluted. The area is crowded with day-trippers on weekends and holidays and more rubbish is being dumped into the sea by visitors and junks.

“There are many places that are beautiful, just that you’ve never been there. I’ve been to Peng Chau, Cheung Chau, Chi Ma Wan and Discovery Bay. The natural landscape is really beautiful. When there’s nobody else, it feels like you’re at Pattaya,” says Leung.

Leung observes that the water quality in Lantau is better than Sai Kung because it is surrounded by the open sea which means ocean currents will sweep away the rubbish floating on the water surface.

But former university rower Simon Yeung Chung-yu may beg to differ, as he has seen a different side of Lantau.

During the expedition, Yeung saw the construction of the Hong Kong-Zhuhai-Macau Bridge in North Lantau.

“Obviously it’s very polluted, many construction ships were moving around. If I were a dolphin, I wouldn’t live there, but it’s actually your home,” he says.

Yeung questions the need for building an over-budget bridge that is destroying the natural landscape.

“You see tens to hundreds of construction ships working, but under this freaking background pops up a dolphin,” he sighs.

According to a 2015 report by the Agriculture, Fisheries and Conservation Department in 2015, there are only 61 Chinese white dolphins left in the waters off Lantau, an Yeung recalls his experience of meeting white dolphins when training in Tai O before the expedition.

“We thought we were just raising funds for the dolphins, we never thought we’d actually see them. We all screamed when we first saw one,” he says excitedly.  At first, he did not believe his teammates when they told him they saw dolphins because there was so much rubbish in the sea. “You will ask yourself whether what you saw was just a styrofoam box or really a dolphin”.

Rowers are not the only ocean-goers contributing to nature conservation. Dragon-Overtime, a local dragon boat team based in Tai Po has incorporated it into their training.

Yeung says team members are required to train in the water and on land. As part of the training on land, they hike along the Shing Mum Reservoir.  One time, their coach brought some bin bags and asked them to pick up the rubbish along the way. They collected several big bags of rubbish. Since then, hiking and collecting rubbish has become part of their training.

Yeung, who has run training sessions this way for Dragon Overtime, has seen an improvement in people’s environmental awareness. He agrees with the campaign to put fewer rubbish bins in country parks.

“This is a good concept as we can’t always blame people for leaving rubbish, sometimes they dump it in the rubbish bin but monkeys throw it out,” he explains.

This January, the team ventured beyond the Shing Mun Reservoir for the first time to collect rubbish. Along with about 40 volunteers recruited online, they went to Tung Lung Chau after one teammate found when he was camping on the island that its coastline was covered in rubbish. However, Dragon Overtime will not go to collect rubbish in Tung Lung Chau on a regular basis because it is hard to access and to transport rubbish off the island. They had to get professionals to set up a pulley to pull out rubbish for transportation and ask the government to arrange for a boat to transport the collected rubbish.

Dragon Overtime member Lang Wing-huen is glad to see more people are organising groups to hike and collect rubbish but she thinks little can be done about the rubbish in the sea.

“The size and amount of coastal rubbish is much larger, and Hong Kong has a long coastal line, and the rubbish is in many areas,” she says.

As regular ocean-goers, water sports enthusiasts are only too aware of how pollution is damaging Hong Kong’s marine and coastal environment. Some of them are making their own efforts to make a difference.
But Lang thinks the government needs to allocate more resources to solve the problem of coastal rubbish. “it depends on how willing the government is to solve this, but I don’t think this is its [first] priority.”

* An earlier version of this story (and the print edition) states that Simon Yeung Chung-yu used to work in construction. This is incorrect and has been amended. We apologise for our mistake.