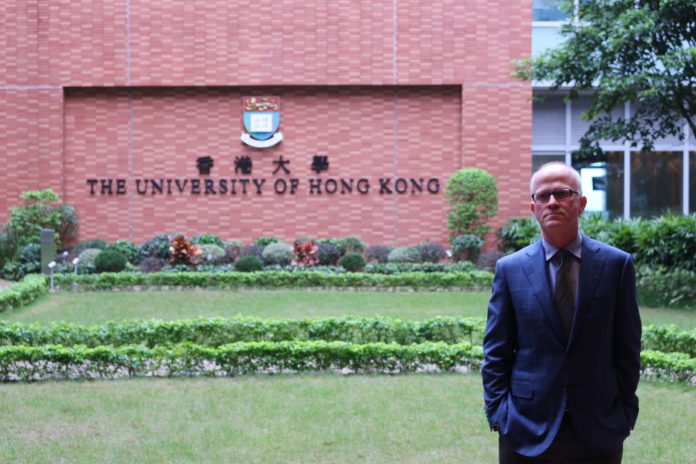 At noon on October 6 last year, around 2,000 people dressed in academic robes and black outfits set off on a solemn and silent march through the University of Hong Kong campus. They were protesting at what they saw as the erosion of institutional autonomy and the University Council’s controversial handling of the appointment of former Law Dean Johannes Chan to the post of pro-vice-chancellor.

The procession thrust Timothy O’Leary, the head of the School of Humanities and a hitherto low-profile Irish philosophy professor into the limelight as a defender of academic freedom and university autonomy.

O’Leary arrived in Hong Kong in 2000 and considers the city his home. While he says he dare not call himself a Hongkonger because he does not speak Cantonese, he certainly feels like one.

“I’ve lived here for 15 years and I feel a very strong connection and commitment to Hong Kong, and when bad things happen in Hong Kong I feel bad about it – angry or sad – and I think that’s kind of a sign of identifying with the place. You care about it.” As he sees it, bad things have indeed happened in Hong Kong in recent years. Back in 2001, O’Leary noticed that many people who had emigrated before 1997 had returned to Hong Kong as it seemed not much had changed after the handover.

All that has now changed and, for O’Leary, the tipping points were the government’s attempt to introduce national security laws under Article 23 of the Basic Law in 2003 and the controversial political reform plan and Occupy Movement in 2014.

He says it is a political reality that Hong Kong is a Special Administrative Region of the People’s Republic of China. The key issue then is how it can maintain its uniqueness, and not become just another Chinese city like Shanghai or Beijing. This, he believes, is becoming increasingly difficult.

As a long-time resident, he has already witnessed the gradual erosion of some of Hong Kong’s most fundamental values. As an academic, the decline that strikes him the most is the weakening of academic freedom and the threat to institutional autonomy.
O’Leary sees the attack on the universities as one of the consequences of the government’s failure to get its proposal for political reform passed. “After that, all of a sudden the universities became the front line, or a new battleground in this fight,” he says.

It is a battle that O’Leary feels duty-bound to fight. The University Council’s decision to block the appointment of Johannes Chan as pro-vice-chancellor despite his being recommended by a selection committee headed by the vice-chancellor, was widely panned as being politically motivated.

It prompted him to help organise the silent march and establish a group called HKU Vigilance to monitor academic freedom and institutional autonomy and support staff under political pressure. He also stood for and won a seat on the HKU Council along with other teachers known to be academic freedom advocates.

Apart from advocating for academic freedom as a scholar, O’Leary has supported various student protests demanding the council give a valid reason for rejecting Chan’s appointment. Outside the university, he supports students’ rights to peaceful protest, and to engage in civil disobedience such as occupying Admiralty during the Umbrella Movement.

He disagrees with those who say student activism damages the university’s reputation. “If I heard the students from a university, say in Oxford, were engaging in protests against their governing body, it wouldn’t make me think less of Oxford,” he says.

O’Leary says he never imagined that he would be able to achieve anything before he took up such a prominent role in defending the university and supporting student movements. But as the head of the School of Humanities, he has a strong commitment to the university and feels obliged to do something.
“I guess I didn’t know if I could do it before I did it, but I did it,” he says. He fully understands that playing an active role in standing up for the university’s autonomy comes with risks. That is why he respects colleagues who may be concerned about their job security and career prospects, and hence choose not to speak out.

Nobody has approached O’Leary to say they have been prevented from expressing their opinions, but O’Leary does feel that some staff do not want to declare their stance because that may damage their academic reputation.

On the other hand, many have approached him to express their support for what he is doing. O’Leary says many people have told him they are glad to see his actions even though they themselves are not willing to stand before the public.

He acknowledges that it feels a little strange that a foreign professor would be one of the people to organise and lead the silent march. It might lead some to think that even a foreigner cares more about the university than some local staff do. O’Leary tries to rationalise it by saying it shows “how internationalised HKU is”.

The overseas academic who comes most readily to mind when it comes to the recent controversies surrounding HKU is Vice-Chancellor Peter Mathieson. When he was appointed to the post, critics questioned Mathieson’s credentials and suggested he was a wrong fit for the job as he had no working experience in Asia. But after two years working with Mathieson, O’Leary speaks highly of him.

“I think he is a very strong academic defender of freedom of speech for students and staff of the university,” he says. “And I think that’s great.”

O’Leary does not agree with Mathieson’s description of the student protests against the new HKU Council Chairman Arthur Li Kwok-cheung as “mob rule”.

But he says Mathieson’s job is not an easy one, especially as he had not expected he would have to handle so many political issues when he took up the job offer in 2014.

He gives a positive assessment of Mathieson’s performance during the Occupy Movement in 2014, when many students and staff of HKU were involved in the protests. O’Leary says he gets the impression that Mathieson wants to focus more on improving the school’s academic research but political issues just keep cropping up.

Over the past few months, the staff unions at eight local universities have been voting on whether to amend the university ordinances to scrap the tradition of having the Chief Executive as the chancellor or president of the universities. In his role as the chancellor of HKU, Chief Executive Leung Chun-ying appointed Arthur Li as chair of the HKU Council despite widespread opposition from students, staff and alumni.

Over 90 per cent of staff at eight tertiary institutions voted in favour of abolishing the power of the Chief Executive to appoint members to university governing councils. But O’Leary is not optimistic it will make a difference.
“Have you ever known the Chief Executive to give in to public opinion?” he asks, with a half smile.

Academia is sometimes referred to as the ivory tower, and at other times the universities are seen as a microcosm of society. In recent months and years, they seem to be closer to the latter. From the involvement of academics and students in the Umbrella Movement, to the controversy over Johannes Chan’s aborted appointment, and the rise of the localist movement, universities are invariably tied to politics in the wider world.

Edward Leung Tin-kei, who stood in the New Territories East Legislative Council by-election as a candidate for the localist organisation, Hong Kong Indigenous, is a philosophy major at HKU. Undergrad, a publication of the HKU Students’ Union, has also explored the concept of localism in its magazine and book Hong Kong Nationalism. These works were openly criticised by the Chief Executive for “advocating independence”.

Some now regard HKU to be a hotbed of localism and even of Hong Kong independence. As a philosopher, O’Leary thinks localism is understandable and comes from people’s sense of identity as Hongkongers. However, there is an element of the localist movement that worries him – what he describes as “very nasty” anti-Mainlander sentiment.

For O’Leary, it is possible to oppose the actions of the central government without personally being abusive towards mainland tourists and students in Hong Kong. From his point of view, these Mainlanders are not responsible for the wrongdoings of their government. What is more, he says it is racist to develop hostility towards people based on their membership of a group.
Apart from the anti-Mainlander sentiment, O’Leary is also unhappy with the use of violence by some radical localists, which his student, Edward Leung Tin-kei has defended.

During Chinese New Year this year, clashes between protesters and police broke out in Mong Kok soon after the attempted clearance of some street vendors by Food and Environmental Hygiene Department officials. Leung was on the frontline during the clashes and was arrested at the scene.

O’Leary says he has not had a chance to talk to Leung after the incident, but he disagrees with using violent means to achieve political goals. “Will this work?” he asks. “I mean, obviously that’s not going to work either. That’s going to work even less [than peaceful protest].”

Although he is clearly worried about the threats to values such as academic freedom, press freedom and the rule of law and by the prospect of protests turning violent, O’Leary says he is both pessimistic and optimistic about the future of Hong Kong. He is optimistic because he sees many people who cherish the things that make Hong Kong different from other cities in China. On the academic front, he will be working alongside them.

Since taking on the fight for institutional autonomy and academic freedom, O’Leary finds he has less free time. But he hopes that by joining the university council, he can help to bring the voices of academic staff into the body so that the outside members can understand their concerns and demands.

“Businessmen don’t necessarily understand the nature of a university,” he says.
Outside of the university, O’Leary grasps every opportunity he gets to relax. He says one of his favorite hobbies is to cook, especially Italian food. Then he jokes, “When I was a student, I imagined that the professors didn’t have a personal life.”

*An earlier online version and the print edition of this article erroneously stated the date of the HKU silent march was October 5th, instead of October 6th. We apologise for the mistake