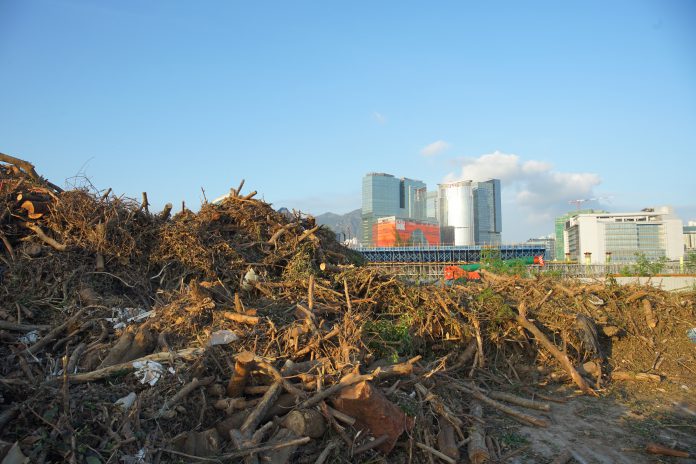 Typhoon Mangkhut left more than 55,000 wrecked and uprooted trees in its wake – and a major disposal problem

A large part of the old Kai Tak Airport runway is still overwhelmed by tonnes of trees knocked down when Super Typhoon Mangkhut, the strongest storm on record, lashed the city in mid-September. About 8,000 truckloads of tree debris have been delivered to the collection area designated for tree waste storage since September 21.

Disposal of tree waste onto the runway continued for nearly two months after the super typhoon struck, according to the Environmental Protection Department. In a press statement issued on November 8, the department said the temporary wood waste collection area stopped receiving tree debris on November 10. It later confirmed that, over the next few months, the waste would be delivered to the West New Territories Landfill or the North East New Territories Landfill so that the Kai Tak dump could eventually be closed.

Green groups and scholars criticise the government for disposing of all the tree waste at the same location and sending most to landfill without conducting any resources classification or selection for further recycling.

Chan Mei-mei, officer of the Greening, Landscape and Tree Management Section under the Development Bureau, explains the government prioritises the removal of storm-damaged trees that pose a threat to public safety and those which have paralysed traffic. As too many trees collapsed within a short period of time, she believes it was not feasible to classify or assess the fallen trees before disposal.

Alvin Tang Ming-chak, a lecturer on tree management at the Hong Kong Baptist University, says tree waste is generated in Hong Kong every day. “The situation after Mangkhut was unusual, as a lot of trees were wholly overturned by the typhoon,” Tang says. Although he understands the government’s decision to dispose of the waste in Kai Tak, Tang worries that useful wood waste is not being recycled. The condition of wood waste deteriorates once they start to ferment, generating gases such as ammonia, he says.

In 2014, the Development Bureau’s Greening, Landscape and Tree Management Section released its Guidelines on Yard Waste Reduction and Treatment which aims to provide information for government departments in charge of gardening works. However, it is only a general guideline that does not introduce any concrete instructions regarding wood waste recycling. “People don’t have to follow it [the guideline],” says Tang. “It is just a guideline but not a regulation. It is not mandatory.”

Tang also points out that disposing of green waste in a landfill is free of charge under the current regulations. He urges the government to review the regulations. “As people know that they will not be charged if they send green waste to a landfill, they don’t have the incentive to reduce the amount of green waste or to sort out useful resources from the waste for recycling,” Tang explains.

He suggests that one solution would be for the government to introduce a penalty for disposing of tree waste in the landfill. Tang points out that many government departments are involved in tree management in different districts of Hong Kong and the gardening work is outsourced to contractors. “The government should also require the contractors to recycle a certain percentage, such as 10 per cent of the tree waste collected. The requirement should be added as a term in contracts,” says Tang. Given time, the contractors Tang believes, would form the habit of recycling tree waste.

The collection of tree waste is the first step in recycling. “The biggest problem [of the Kai Tak collection area] is the absence of a classification system,” says Tang. “When the wood waste is collected, they are not sorted. Different sizes of trunks, branches and leaves are mixed together in the collection area.” He explains that different kinds of wood waste can be recycled in many different ways. For instance, Tang says, small trunks can be crushed and turned into compost for mulching and medium ones can be used for building fences. The large trunks can be used for making furniture, he says.

Roy Tam, general director of the local green group Green Sense, says he feels disappointed that the government fails to act in line with its own environmental policy which advocates waste reduction and low carbon emissions. “It is such a waste… sending tree truks to landfills. The general public will have a misconception that fallen trees are all garbage and useless.”

Tam suggests the government should set up shelters at tree waste collection areas in order to keep the trunks dry and in good condition which is important for effective recycling. The green group is reaching out to the business community to help and it has encouraged biomass companies and power plants to take a more active role in reusing and recycling felled trees.

At the Kadoorie Farm and Botanic Garden (KFBG) of Hong Kong, all tree waste is recycled, Kit Lee Kit-wah, the education officer of KFBG says. Some are used by artists to create sculptures while trunks can be turned into tables and chairs for visitors. Such uses, however, take up a very small amount of the total amount of tree waste.

Wood waste is also used to make compost at KFBG. Staff members mix crushed wood with animal faeces. “If we retain all the wood waste in the forest, it will break down very slowly,” says Ryan Chiu Kam-wai, the senior arborist of Flora Conservation Department at Kadoorie. “However, if mixed with animal faeces, the carbon and nitrogen content will be balanced. And when the mixture is fully mature, the compost can be used as fertilizer at farms, providing considerable nutrition to the soil,” he says.

But Chiu believes it is not feasible to turn all wood waste into fertilisers, as the process is time-consuming and requires lots of space. He says woodchips can also be used for mulching as a protective layer for soil and offer protection and nutrition to tree roots.

In a press statement released in early November, the Environmental Protection Department said it had procured an industrial grade wood shredder, which would be placed in the open space near T·PARK, and it was estimated that about 100 tonnes of tree waste could be shredded every day. The shredded wood would be used to conduct various treatment trials, such as using it as a bulking agent in the composting process at the Organic Resources Recovery Centre; turning it into wood pellets into solid fuel for boilers or cement manufacturing; or turning it into soil cover for use at landfills.

Tang warns that Hong Kong will probably be hit by strong typhoons more often in the future due to climate change. He urges the government to develop a long-term strategy to handle wood waste. “Now that the Kai Tak collection site is full, what other solutions do we have? What about the future?” says Tang. “It doesn’t matter if the government fails to do well in dealing with tree waste this time, but they must learn a lesson to develop a systematic process to recycle tree waste if another super typhoon hits Hong Kong again.”

In the same press release issued in early November, the Environmental Protection Department added they would review the experience gained in handling the aftermath of Typhoon Mangkhut and identify areas for improvement. “Looking ahead, the government will need to build new refuse transfer facilities and increase the capacity of existing refuse transfer stations (RTSs),” the statement read.