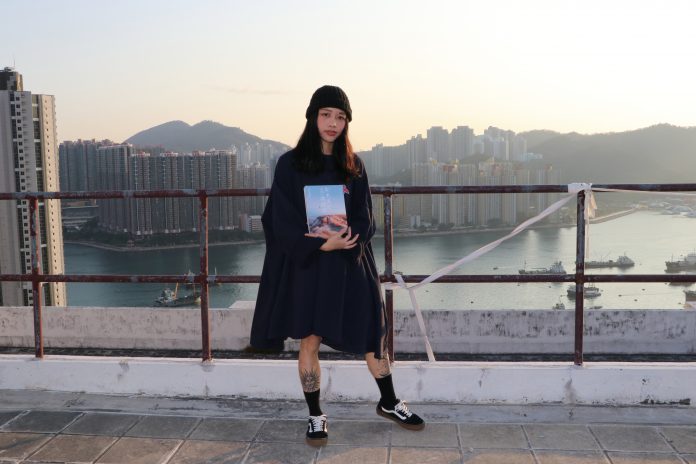 In a hectic city where everyone works overtime for a living, she chooses not to have a full-time job but to wander around. 27-year-old Ho Kit-ming, also known as Siuming, spent more than a year away from the hustle and bustle of Hong Kong to discover meanings of life through travelling.

Born and raised in a single-parent family, Siuming and her sister, Willis, are passionate in helping the vulnerable in society. They joined several social movements between 2009 and 2013, when they were university students. However, an unpleasant experience stopped Siuming from staying in the front line.

During a protest in 2013, Siuming was spotted to be “back-hugged” by a policeman. “It was quite stressful. I had to hold a press conference and be interviewed by media outlets,” she recalls. “I did a lot of things back then such as suing the policeman involved in the case and giving the public an account of the incident.” She found it hard to handle harsh comments circulating on different social media platforms. “Some netizens mocked me as a ‘prostitute’ just because of my little tattoo.” She could not bear such stress, and gradually she becomes less engaged in social movements.

Wandering around the globe

At 21, Siuming broke up with her ex-boyfriend. She then travelled to Cambodia alone for a two-week soul searching trip, hoping to recover from the breakup. In a youth hostel, she met a Canadian backpacker who had been travelling abroad for three years. After listening to his enlightening story, she felt amazed. Since then, she began to embrace the idea of backpacking to broaden her horizons.

Upon graduation, Siuming began travelling. With only a backpack and a one-way ticket to Lhasa, Tibet, she kicked off her life-changing journey as a wanderer. “I told myself that I would go home after I had spent all my money, which was around HK$20,000,” she says. “The less I spend, the longer my journey would be.”

Backpacking is gaining popularity among young adults in recent years. There is an increasing trend of youngsters travelling alone to less developed countries. Siuming believes everyone has their own ways to travel. She thinks the genuine meaning of “travelling” depends on what one gains and learns during a journey. “In the past, I would insist on travelling overland with a backpack.” She now has a different view: “It is not the way I travel that matters, but the attitude and lessons learnt.”

A Bowl of Compassion

By coincidence, Siuming met the founder of “A Bowl of Compassion”, a charity which builds schools in India, during her journey. The school built by the charity is located next to a hostel where backpackers drop by to teach students voluntarily. She was one of those enthusiastic volunteers. Siuming did not think of leaving the students behind until she decided to head back to Hong Kong.

After her year-long journey, she decided to return to Hong Kong to find a job. She chose not to become a social worker, though she was a social work major graduate. She believes that it is not what she really wants.

Instead, she brought another HK$20,000 with her and flew back to India. She purchased some traditional handmade scarves from some Indian suppliers and sold them in her online shop called “Wish You Were Here”. Her shop now also sells goods made by people in other developing countries such as Nepal.

The shop has been a great success, attracting over 6,000 followers on Instagram. But Siuming says she has never thought of expanding the business. “I prefer doing it on my own and I don’t want to put too much pressure on myself,” she says.

A portion of the revenue from the online shop is shared between two schools in India – “A Bowl of Compassion” and “The Flowers of Lakshmi”, for their development and renovation.

“I think that what I am doing now celebrates the value of sharing which is also relevant to social services,” she says. Her work has made impact on the vulnerable ones by providing them education. With the help of Siuming, the two schools in India are now well-developed. She is now planning to share some of her revenue with an orphanage in Nepal.

As an experienced wanderer, Siuming encourages teenagers who like travelling to be brave and give it a try. “However, we have to strike a balance between expectations and reality,” she says. She acknowledges that some people may need to take care of their families. “We actually need to plan ahead before travelling instead of leaving without any preparation.”

Siuming is ready to start a new phase of life. She will soon embark on another journey in South America, where she plans to stay for around three months. Siuming’s travelling story… to be continued.