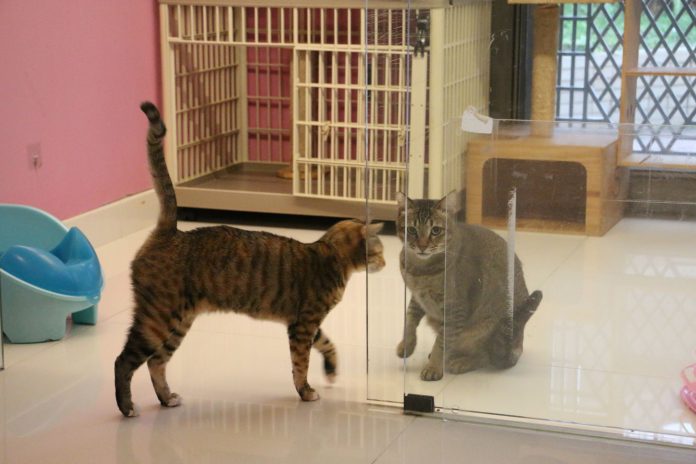 Volunteer cat rescuer Lisa Olausen, who has saved thousands of cats in Hong Kong, speaks of her love and care for her furry friends

An impulsive thought to take a stray cat back home becomes the first step of her life as a cat rescuer. Lisa Olausen’s house is a shelter for stray cats waiting for adoption. Over 2,000 homeless kittens have stayed at her home temporarily for the past 16 years.

Now a full-time individual cat rescue volunteer, her life has changed since 2003 when she brought the first stray cat for neutering. She sold her beauty parlour business and decided to devote her time to cat rescuing. The cat was not the first stray animal she took home. In 2000, when she was still working in the construction industry, she saved a stray dog in a construction site.

Olausen does not regard cat rescuing as an achievement. Her belief is simple – to save cats whenever she can.

To save stray cats, Olausen has to first catch a targeted cat and bring it to a vet for body check and neutering. Then she calls for adoption through her Facebook page, which has more than 10,000 followers. In order to screen potential adopters, Olausen asks them their family situations and living conditions and even arranges home visits.

Olausen is also a volunteer for the Cat Colony Care Programme (CCCP) under the Society for the Prevention of Cruelty to Animals (SPCA). She regularly looks for stray cats in her neighbourhood and sends them to the SPCA for further neutering operations. She is a supporter of this scheme, as it saves cats instead of euthanising them.

Olausen encounters many difficulties during her daily rescuing works, like suffering from mosquito bites in summer and cold in winter. Having no driving license, every time she takes a stray cat to a vet, she has to find a driver. She also faces oppositions from villagers. “Some villagers might be unfriendly to cat rescuers and forbid them from capturing stray cats,” she says. Despite the difficulties, she still enjoys her work.

Olausen sees cats as an important existence in her life. She sees helping cats find new owners as “arranging marriage for her sons and daughters”. She hopes these cats can live in a new home happily ever after.

Having rescued stray cats for so many years, Olausen says there were moments that she thought of giving up, especially when someone returned her the cats she had taken care of before. There was once an adopter who claimed an 11-year-old cat that he adopted from her, attacked his new-born baby. The adopter returned the cat to her and she was very disappointed. “Sometimes it might be the baby attacking the cat first. The cat only attacked the baby once!”

She is often worried if the cats she takes home will be adopted and if the adopter is irresponsible. Some of the cats that no one wanted eventually became her pets.

For Olausen, a responsible cat owner should be able to protect a cat and should not abandon it in any situation. “You have to take care of it till the end of its life once you decide to raise it,” she says. She adds that cats need to be educated as well. Pampering them does not mean loving them.

She finds it hard to maintain her cat shelter financially. The medical expenditure for pets is high. “When you love them [the cats], you just have to do it,” she says.

As a cat rescuer, Olausen supports the idea of establishing animal cops since she believes many animal abuse cases are ignored by the police. “Actually, many of my adopters are police officers,” she says. “They support this policy too but unfortunately, they do not have the power to investigate into these cases.”

To improve the current animal policies, Olausen thinks giving more freedom to animal rescue volunteers is the best solution. “The government does not have to implement any specific measures. It is more than enough if officials support our voluntary work,” she says. She adds that it would be a win-win situation since the government does not need to bear the cost of human resources, while volunteers can protect the animals.

Speaking of her future plan, Olausen says she would like to extend her career further to educating the public about animal welfare. She is now promoting animal protection by encouraging her friends and adopters to work in cats neutering and become volunteers in the CCCP. “It is essential to start the education from cat population management and then work in neutering,” she says.

Recently, she started to reduce the number of cats she takes home as she is preparing to move to Malaysia later this year in order to provide her family and cats with a better living environment. Though the culture and religious practices may be different, Olausen hopes to continue her cat rescue in Malaysia. “Cats are my genuine companions. I will not give up easily,” she says.