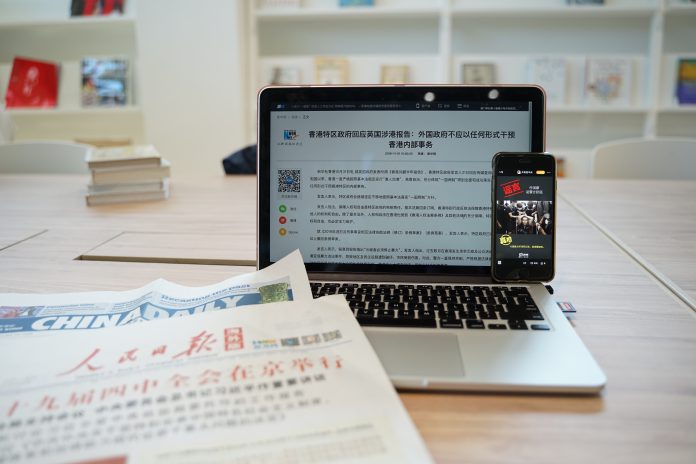 Mainland students who study outside the Great Firewall of China have different news consumption habits, which influence their views on Hong Kong protests.

We are what we eat. We are what we read. Access to information, especially when Hong Kong is caught in political turmoil, is more important than ever before. As the movement sparked by the anti-extradition bill continues, news consumers are hooked to screens for information about protests on the front line.

When most assume that Mainlanders who mostly take Chinese social media platforms such as WeChat and Weibo, where politically sensitive topics are heavily censored, as news sources probably take a stand against the ongoing movement in Hong Kong, there are actually many who try to read news beyond the Great Firewall of China.

The Great Firewall of China is a surveillance and censorship system with the aim of ensuring discussions on China’s Internet are all topics approved by the Chinese government.

Varsity interviewed some mainland students who are currently studying in Hong Kong or abroad to learn about their news consuming habits. All of them decline to reveal their full names for fear of getting into trouble when they go back to Mainland China.

Chloe, a mainland student who is currently studying in Hong Kong, says some Mainlanders, especially those who have higher education levels and can bypass the firewall, are trying to gather more information to read before making judgments.

Chloe says when the protest started in June, many mainland students in Hong Kong were actually quite supportive of the movement. They also shared the news from different sources about the protests with their friends.

“These Mainlanders think they have the responsibility to spread verified information [about what is happening in Hong Kong],” says Chloe. “I also have many friends living in China who are familiar with this city and try to tell other people about the movement.”

Though many no longer support the movement due to escalating violent clashes, they are aware that different news sources are feeding news consumers very different stories.

Chloe says she is in the habit of reading news on Weibo and some bloggers on this social media site post information they gather outside the firewall. “But they have to bear a risk for having their accounts deleted,” she adds.

Mainland students who are studying abroad are also aware of different news narratives on different news platforms they browse. David is now studying in Canada, and he thinks it is important to acquire information from different sources. He cites a video about a man who was proved to be a reporter of the Chinese state media Global Times being beaten by protesters at the Hong Kong International Airport as one example.

“The same image or the same video may be interpreted differently by different media outlets in different countries,” says David. “The video went viral among Mainlanders and they think the protesters are pro-independence rioters and the movement has disrupted people’s daily life. That made the viewers think it was unreasonable for Hong Kong people to ask for their five demands.”

The five demands, Hong Kong people have asked for, include: an independent commission of inquiry, full withdrawn of the extradition bill, retraction of the characterization of protesters as ‘rioters’, amnesty for arrested protesters and dual universal suffrage, meaning for both the Legislative Council and the Chief Executive.

David started to have a negative attitude towards the Hong Kong movement after the protesters occupied the Hong Kong International Airport on August 12th, as he thinks the movement has affected other people and caused inconvenience and chaos. But he admits that it is hard to be objective in judging the movement.

David follows official accounts of international media outlets such as the New York Times, the Columbia Broadcasting System, and the British Broadcasting Corporation on Instagram. He prefers reading news stories produced by foreign news media outlets. “I believe in them more, because I think they can report news from a more objective angle,” he says.

He also reads news reports by Hong Kong media outlet, such as Apple Daily as well as those articles posted on Weibo and WeChat official accounts. “But I tend to avoid reading news produced by Chinese media outlets. Since the media in China is controlled by the party, you cannot learn about the movement in Hong Kong with an objective perspective [by reading their stories],” he says.

Another Mainlander Jacque shares David’s view on the Chinese news media. Having lived in Hong Kong for four years, he thinks Chinese official media outlets tend to be biased in their reporting.

“From their posts on Weibo or WeChat, I can sense that they tend to stir up readers’ emotions,” he says. But he still thinks news reports by these Chinese official media outlets are worth reading. “You can understand the party’s attitude towards certain incidents by reading these news stories,” he says, adding that he also reads news from Weibo and WeChat official accounts.

Sina Weibo, one of China’s most popular microblogging platforms, is widely used as news sources by Mainlanders.

Though many Mainlanders try to surmount the firewall for more access to information and the news, Jacque thinks that does not mean they will change their attitude toward the movement in Hong Kong or make them become more supportive of the protesters.

He attributes it to two main reasons. “First, they have a strong belief and faith in the party’s policies and rules. The other reason is about the development of computer algorithm. For example, if the first account that you follow on Facebook is the overseas edition of the People’s Daily, the recommendation system will forward you more information from those media outlets sharing similar political stances,” he says.

The People’s Daily is the official news outlet of the Communist Party in China, and it provides direct information on the viewpoints of the party.

Jacque thinks that in the long run, the Mainlanders who mostly consume news by China’s news outlets, the perspective of the information they get will be more and more limited.

Be alert when consuming the news

Grace Leung Lai-kuen, a lecturer at the School of Journalism and Communication at the Chinese University of Hong Kong, says it is normal for the people living in the Mainland to have their own perception of Hong Kong. “The perception may be shaped by the country, by the previous experience, or by the education,” she says. “If they have their own values, they will impose their values while viewing those issues.”

Leung thinks that when people try to get the news, they will filter the information through their own ideology and political preferences to confirm their existing knowledge. She says no one will see things from a neutral stance. “If the information is close to their values and shares similar ideas, then they tend to accept it,” she adds. To be aware of the authenticity of information, Leung encourages people to keep a sceptical mind when reading news.

By Gloria Li and Jasmine Ling