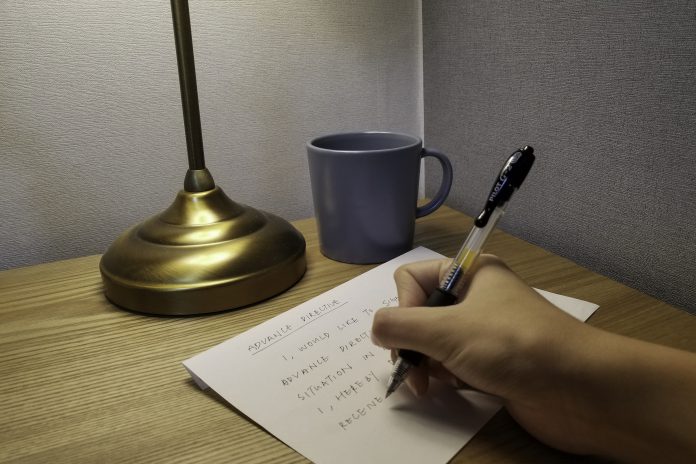 Patients in their last stage of life can choose the end-of-life treatment they receive by signing an advance directive, but medical workers, paramedics and their family members have little knowledge about the directive.

Wan Sin-man is an 81-year-old volunteer of Sham Shui Po District Elderly Community Centre. She is diagnosed with Angina pectoris which means she suffers from chest pain due to coronary heart disease. She has been admitted to hospital many times and undergone five surgeries for the same illness so far. But Wan is not afraid of talking about death, as without the advanced medical facilities, she thinks she would have died already.

Wan learns about advance directive from news and supports the signing of it. Her doctors have never mentioned anything about it during follow-up consultations. Wan already has her last will prepared, though she still has not signed the advance directive. “It was tough for both patients and family members to see windpipes being inserted into a patient’s throat,” says Wan.

Advance directive is a written document which a mentally-competent person aged 18 or above indicates what healthcare treatment he or she refuses to have, such as tube feeding and cardiopulmonary resuscitation, when he or she enters a persistent vegetative state, goes into an irreversible coma or suffers other end-of-life illnesses. It must be signed under the supervision of two witnesses, one of them must be a registered doctor and neither of them is a beneficiary of the patients’ inheritance.

The government has launched a three-month public consultation over the legislation of advance directives in early September 2019. It is part of the advance care planning process in which patients express preferences over end-of-life care after discussing with family members and healthcare workers.

Advance directive was promoted when the Law Reform Commission of Hong Kong introduced the concept back in 2006. It can uphold the right to self-determination and enhance the quality of life of a patient. But the feasibility of legislation has raised concerns.

“The responsibility of medical professionals is to facilitate decision-making process of patients and their family members by making sure they are well informed of the decision,” says Joseph Lee Kok-long, the chairperson of Hong Kong Association of Nursing Staff. But not all healthcare providers know the basics of advance directive as it depends on their specialties. To become palliative care professionals, medical workers are required to have further training including understanding the end-of-life context and improving the patient’s quality of life during end-of-life care.

Though the government proposes that treatment providers will not incur liabilities for withdrawing treatment from patients in the presence of an advance directive, family members might be reluctant to let their loved ones go. These all come down to the cultural and ethical issues that cannot be regulated and measured.

“Medical professionals won’t mechanically follow what the directive states. They will keep checking on patients and take appropriate actions at the request of family members,” says Lee. He also stresses that communication with clients is important for medical personnel to resolve any misunderstandings about the advance directive.

In view of the overloaded medical system, each consultation only lasts for a few minutes. “Healthcare personnel is unable to map out details of advance directive even when patients and their families want to learn more about it,” says Yuen Siu-lam, the chairperson of the Self-Help Group for the Brain Damaged.

The government proposes that the original copy of advance directive, which may be revoked at any time by the patient, should be presented to paramedics as proof of its validity. Otherwise, they will continue to provide clinically indicated emergency life-sustaining treatment. The requirement causes inconvenience to elderlies who live alone.

“Once they fall into a coma or become unconscious, they are unable to show valid documents to paramedics,” says Yuen. He points out that revocation of the directive adds trouble to the elderly. He suggests replacing a valid advance directive with a QR code on a wristband or a necklace that stops the paramedics from doing Cardiopulmonary Resuscitation (CPR).

Paramedics from the Fire and Service Department (FSD) carry out CPR and other relevant treatment procedures to resuscitate patients in need of immediate medical attention before arriving at hospitals. Then, they convey patients to hospitals for appropriate treatment.

“The problem can be resolved by either removing ‘resuscitate’ from the ordinance or establishing a new law to reinterpret ‘resuscitate’ so that the ordinance won’t override the advance directive,” says Roger Chung Yat-nork, associate professor of the Jockey Club School of Public Health and Primary Care. The Mental Health Ordinance, the only law dealing with mental health matters in Hong Kong, defines mental incapacity as “mental disorder” or “mental handicap”.

Chung explains, “a person with mental illness doesn’t necessarily mean he or she cannot make decision on medical treatments. We should resolve the uncertainties with definitions to make the advance directive valid and applicable.” He takes the Mental Capacity Act from the UK as an example, “Under the Act, the advance directive has legal backing when the person signing it is losing his mental capacity. Otherwise, it is pointless to sign in advance.”

Public awareness about end-of-life issues is also low in the socio-cultural context. Statistics from the Hospital Authority show a slight increase in the number of patients signing advance directives from 937 in 2016 to 1,557 in 2018. Another population-based cross-sectional telephone survey of 1,067 adults in 2017 by the Chinese University of Hong Kong indicates a total of 85.7% had not heard of advance directive. But after explanation, 60.9% said they would make their own advance directive if it is legislated.

Chung agrees that the public mindset about death can be changed through education. “Take Taiwan as an example, end-of-life education is covered starting from kindergarten, so they are more mentally prepared for discussing death,” says Chung.

The Taiwanese government includes life and death topics into the education system to break down cultural taboos against discussion about death. The concept of palliative care is also introduced through mainstream and social media to increase public awareness. In the 2015 Quality of Death Index conducted by The Economist, Taiwan ranked sixth among other 80 countries with a score of 83 over 100. While Hong Kong only ranked 22 with a score of 67.

The power of education is echoed by Dr. Paul Shea Tat-ming, Co-Chairman of the Hong Kong Medical Association of End of Life Care, and a Specialist in Geriatric Medicine. He believes people with higher education comprehend life planning easier. “To promote a measure, you should start from citizen’s education instead of legislation,” says Shea.

Developing a culture of respect between members of the public is crucial in promoting advance directive. “Doctors will bring out the topic to patients when a bleak future is foreseeable… family members who have taken care of patients around the clock are more likely to respect patients’ decisions,” says Shea. And he thinks that the public, especially secondary school students should be more exposed to life and death topics, so that they have a clearer concept of advance directive and higher acceptance of it. “It should be done by the Education Bureau because Hospital Authority is only a medical department,” says Shea.