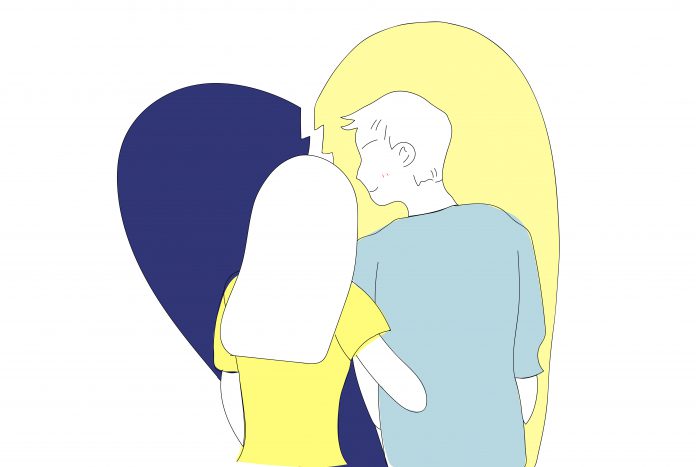 Politics is everywhere. It affects a society in many aspects including romantic relationships. Lovers are supposed to stand by each other, but can they still support each other when they have opposing political views?

How dating is affected by politics?

“The division has put us on the edge of breaking up,” says Ruye Xia. She finds a relationship crisis brewing. They had endless fights triggered by different views on the anti-ELAB movement in Hong Kong.

Xia, a Year 2 student studying at the Chinese University of Hong Kong, has been in a relationship for three years with Naiq Xu, who studies in China.

Xia feels helpless when she tries to persuade her lover to understand the reasons behind the movement. Her boyfriend also refuses to communicate with her.

Xu, says being indifferent to politics, the lovers mostly chatted about food and gossips about others rather than politics. “What bothers me the most is her suffocating attitude, but not the difference in political views,” he says.

Apart from having arguments with families and friends, many young lovers in the city are struggling in their romantic relationships which have turned stormy due to politics. More and more people reckon political stances as one of the crucial factors in judging their partners –“Yellow”: being on the side of pro-democracy protesters, “Blue”: being on the side of the pro-establishment.

Finley, a Year 2 university student who declines to reveal her full identity, shares a similar experience. She broke up with her German boyfriend Josh because of continuous quarrels over the social unrest in Hong Kong. Josh thinks actions taken by the Hong Kong Police Force are justified, as police shooting is common in the United States.

Finley thinks it is absurd to compare the situation in Hong Kong with that in the USA, where cultural and social contexts are very different in terms of police brutality and abuse of power by frontline police officers.

Yet when asked whether the conflict led to the end of their relationship, Finley denied without a doubt. “I asked for break-up because I want to be alone”, she says, “I hate being obliged to stay with someone just because he is my boyfriend when I am in a relationship.”

While some lovers quarrel and break up because of different political views, some also fall in love because of politics.

Max Zhang, a 20-year-old Chinese student who came to Hong Kong to study two years ago, met her girlfriend, who prefers to be called Winnie, because of their political views. They met at a political event.

Before they met, Winnie was isolated by her friends due to her choice of being a ‘blue ribbon’. Her friends leave comments such as ‘Cold-blooded’ and ‘Get Out of HK’ on her Facebook account. The lonely girl went to a political activity held by a blue camp group. Participants sang patriotic songs to celebrate the 70th anniversary of People’s Republic of China. She met Zhang there and thought of Zhang as her Mr Right who fully understood her.

Yet, it takes more than sharing the same political view to maintain a relationship. Max and Winnie broke up a month later. Both of them realize that they do not know each other very well.

Chin Ming-hui, assistant professor from the School of Psychology at the Chinese University of Hong Kong, points out that the social movement merely reveals problems that have long existed between lovers, such as forcing opinions on others.

“The opposing political views cause conflicts between lovers, but they are usually not the real and main cause. Even if without the protest, the latent contradiction will erupt someday,” he says.

Ways to cope with romance problems – Respect and communication

To maintain a healthy relationship, Chin thinks respect is the key. Chin thinks it is hard for couples to be like two identical leaves, looking for a spouse that shares same thoughts and views. The difference in political opinions is as natural as that in dining habits. “Don’t be charged emotionally and magnify any distinction”, he says, “especially when facing politics, a complex question with more than two options.”

Chin advises couples to divert to other topics instead of drowning in the swamp of protests. ‘Excessive repetition will diffuse negative energy, putting the two under much pressure. Try digesting the emotion independently and stop drawing comfort from others. Sometimes stopping is going ahead,’ he adds.

Despite their different political views, Addrina Zhang, a 19-year-old university student studying in Hong Kong, gets along well with his boyfriend Suntoo, who studies in Canada, by following principles similar to Chin’s advice.

Zhang believes that the social unrest brings them closer by teaching them how to deal with frictions. At the beginning, they also argued for the same issue about the unrest when it first broke, but soon they figured out solutions to deal with arguments.

“Every time when signs of conflicts emerge, we always put them aside temporarily,” Zhang says, “perhaps we will think the same way several months later.”