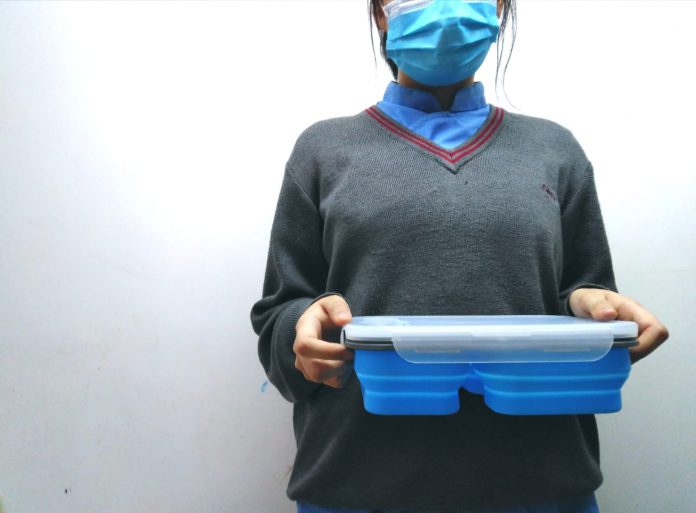 How is the city fighting against single-use plastics amid COVID-19?

A student in a traditional blue cheongsam waited in a long queue in front of a restaurant. While other students returned to school with their lunch packed in white styrofoam boxes, she handed out her lunchbox after ordering her takeaway. The waitress looked hesitant while reaching for the container.

Emily Cheung Yee-kwan, an 18-year-old student, was one of the only few in her school to do so.

“I was taught to avoid using disposable plastics,” Cheung says. “So I bring my containers as I feel uncomfortable and guilty knowing that single-use plastic ones are going to end up in the landfill for years,” Cheung adds.

“So I bring my containers as
I feel uncomfortable and guilty knowing that single-use plastic ones are going to end up in the landfill for years.”

It takes 500 years for plastics in landfill sites to decompose, according to the Friends of the Earth.

According to the data from the Environmental Protection Department in 2018, plastics constituted 21 per cent of municipal solid waste with a daily disposal quantity of 2,343 tonnes per day. Almost nine per cent of them were plastic or polyfoam-dining wares.

People carrying takeaway food in several plastic containers, however, has become a common scene in Hong Kong under COVID-19.

As confirmed cases of coronavirus surged in March, the government announced its first dining restriction on March 27, and the regulations have been eased and reintroduced for a few times since then. As of September 30, the number of customers at any catering premises must not exceed half of the normal seating capacity and no more than four persons can sit together at one table.

With uncertainty of the pandemic and changes in dine-in restrictions, many restaurants have rolled out takeaway or food delivery services. Over the past few months, Foodpanda, a mobile food delivery marketplace, has also observed an uplift in demand order by 50 per cent in Hong Kong on the overall platform, including both food and grocery delivery services.

The health crisis seems to have derailed effort against plastic waste reduction and left many in frustrations, as few are bringing their own containers.

“I feel alone and not supported because none of my schoolmates does the same and some restaurants don’t understand or feel annoyed,” Cheung says.

“I feel alone and not supported because none of my schoolmates does the same and some restaurants don’t understand or feel annoyed.”

“Most Hong Kong people don’t know what is recyclable so they put everything in it, including diapers and masks,” he says. To prevent the recycling from going to waste, his company, The Loops, collects plastics directly from customers’ residences and sorts wastes collected before giving them to recycling factories.

Wong also sees a drastic increase in plastic use from his customers. “We see plastic use jump by 50 per cent when dining in restaurants was banned all day,” he says.

As of September, The Loops have hundreds of customers in Tseung Kwan O, the only district in which the company is operating. “Up to now (late September), we have recycled about 1.5 tonnes of plastics and we are seeing an increasing trend,” he says. The company hopes to extend its service into other districts in the future.

Recycling aside, some restaurants try to eliminate plastic waste source by finding alternatives to replace plastic takeaway containers and utensils.

The Alchemist Cafe, founded by Dylan Leung Tik-lun in October 2012, has been looking for more environmentally-friendly substitutes for three years. “Plastics are definitely more economic, but just one straw will take hundreds of years to decompose in the landfill,” Leung says. “So we insist to opt for a greener option,” Leung adds.

Reactions from customers have proved Leung’s decision right. “I think the majority of  customers support and appreciate our decision,” Leung says. “In fact, I found them very tolerant to situations like straws made of rice becoming soggy after a while,” Leung adds.

Apart from finding disposable alternatives, Yvonne Leung Yee-wan from Space Cafe and Kitchen, believes using reusable containers is another way out. Since mid-March, the restaurant has been providing discounts to customers who bring their own dining wares, and tableware rental service for takeaways.

“We collect $50 deposit from our customers for every reusable lunch box and they can return it anytime at their convenience. At least one customer would rent a lunch box per day,” Leung says.

“We put the environment as our priority,” Leung says. Apart from economic cost, she believes one should also take environmental cost into account. “We need to evaluate and strike a balance between both costs,” she adds.

As businesses are trying their best to minimise plastic waste, WWF Hong Kong launched the Plastic ACTion Initiative (PACT) in March this year to target the entire food industry.

Leading food delivery companies in Hong Kong including Deliveroo and Foodpanda, which accounts for about 90 per cent of the market share in the city, have signed an industry-wide pledge to eliminate plastics by 2025.

Apart from default cutlery opt-out option, Foodpanda is working with global and local suppliers to source sustainable packaging products for its merchants and restaurants to use in the future, the company says in a written reply.

Looking into the Future

“Hong Kong lags behind when it comes to plastic waste legislation,” Wong says. She believes the “Plastic Shopping Bag Charging Scheme” that bans free plastic shopping bags distribution in the retail industry in 2015, has proved the effectiveness of legislation.

“The amount of plastic bags disposed of at landfills plummeted,” Wong says. “Legislation could definitely help reduce plastic waste effectively because it is legally binding and it could also arouse public awareness,” Wong adds. According to the Environmental Protection Department, the number of plastic bags in landfills decreased from some 660 million before the implementation of the scheme to some 150 million one year after the implementation.

“Legislation could definitely help reduce plastic waste effectively because it is legally binding and it could also arouse public awareness.”

Chief Executive Carrie Lam Cheng Yuet-ngor stated in the policy address in 2018, that the government would “study the feasibility, scope and mechanism of controlling or banning disposable plastic tableware.”

The Environmental Protection Department (EPD) says it is conducting the study to “draw up proposals suitable for implementation in Hong Kong” and the study is expected to be completed by the end of 2020 in a written reply.

As Wong welcomes legislation for the use of plastic dining wares, she also advises the government to subsidise the food and beverage industry by offering funds.

“If disposable plastic tableware is to be banned in Hong Kong, the government has to provide financial support to the industry during the transition period,” she says.