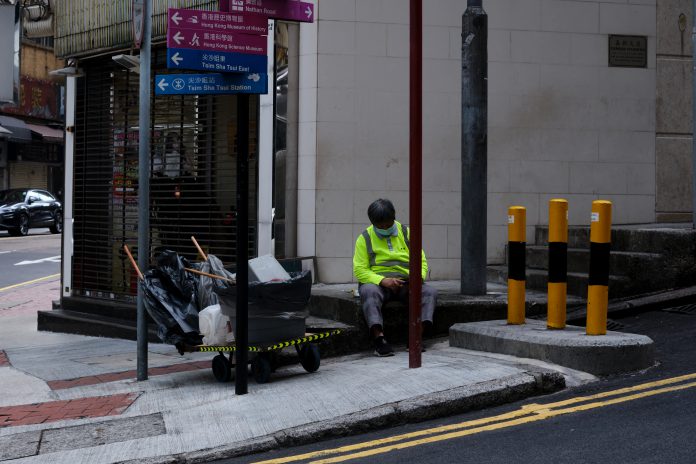 The story investigates working conditions faced by cleaners in Hong Kong during the pandemic.

Public hospital cleaner Lee*, who works at an obstetrics and gynecology ward, has endured an increasing workload during the pandemic.

“Since March 2021, (cleaners) are required to sterilize high-touch surfaces such as handles, elevator buttons and armrests along corridors every two hours,” says Lee, who works at Kwong Wah Hospital in Yau Ma Tei. Before the pandemic, she cleaned these surfaces just once every shift.

Lee, whose eight-hour morning shift lasts from 7 a.m. to 3 p.m., also has to mop the floor of almost twenty rooms and two public toilets once every shift.

“I also need to collect garbage at wards, retrieve food trays and disinfect mattresses when patients leave. Having to clean hotspots every two hours makes me very busy,” Lee says, adding that she suffers from arm and leg pain because of her job.

“I hardly have any time to take a break at work, and sometimes I don’t even have time to drink water. I have lost over 20 pounds since I have taken up this job,” Lee says.

She started working for the hospital in April 2020 after being laid off in January.

The hospital cleaner also has safety concerns during the pandemic.

“When I am assigned to do overnight shifts, I have to collect medical waste in high-risk wards where COVID-19 patients are admitted,” Lee says. She is given N95 respirators and disposable protective clothing only when she has to work in those wards.

Living with her son’s family and her 12-year-old grandchild, Lee always showers before heading home.

“Of course I am worried (for myself and my family) working for the hospital during the pandemic, but what else could I do to make ends meet?” she says.

“Of course I am worried (for myself and my family) working for the hospital during the pandemic, but what else could I do to make ends meet?”

Lee earns about HK $13,000 monthly and receives a HK$500 daily subsidy when she is assigned to work at high-risk wards. Other than that, she does not have any other labour protection.

On June 16, 2020, the government introduced a monthly allowance of HK$1,000 under the Anti-epidemic Fund for up to seven months.

The allowance, according to a press release issued on the same day by Secretary for Financial Services and the Treasury, is for cleaners employed by “service contractors of the government and the Hong Kong Housing Authority”.

But cleaners working at public hospitals managed by the Hospital Authority, like Lee, are not eligible to apply for the fund.

“I do not receive other financial protection (apart from daily subsidy). I didn’t even know there were monthly allowances for other cleaners,” she says.

Lee is not the only case. Cleaner Kornwika Heelakul is also struggling to handle a heavy workload to keep building premises clean during the pandemic.

“I empty garbage bins once every shift. It used to be one to two bags of trash. Now I have to take two to three turns, disposing of three to four heavy trash bags every day,” says Heelakul, who works at a commercial building in her first shift and a residential building in her second.

The 52-year-old Thai cleaner attributes her doubled or even tripled workload mainly to an increasing number of lunch boxes being disposed of.

“More people ordered takeaway (to avoid infection and reduce infection risk),” says Heelakul. She works 11 hours a day and has worked as a cleaner for 20 years.

“I have to collect at least 10 more bags of trash at each collection point since the pandemic began. Each bag sizes 38 inches times 42 inches, carrying up to five kilograms of trash,” the 60-year-old cleaner says.

“I have to collect at least 10 more bags of trash at each collection point since the pandemic began. Each bag sizes 38 inches times 42 inches, carrying up to five kilograms of trash.”

Tang, who works 16 hours a day, also says his schedule is packed because of increased waste. “I used to collect one to two tonnes of garbage a day, and now I collect half a tonne more,” he says.

“Some people dispose lunch boxes and food waste on the street, and I have to clean them up,” Tang says.

Denny To, the General Secretary of the Cleaning Service Industry Workers Union, believes cleaners are underpaid despite doing a high-risk and demanding job.

“Cleaners only receive at most HK $7,000 as subsidy since the start of the pandemic. Cleaners under the Hospital Authority don’t even get any subsidy which is very ironic that they cannot get paid despite the high risk of infection,” he says.

“The union has written a petition letter to the Hospital Authority regarding this issue, but they did not respond,” he adds.

To also says that workload of cleaners has rocketed since January 2020.

“Cleaners are also loaded with disinfection work such as cleaning and disinfecting hotspots of contact, such as elevators more frequently. Cleaners also have to disinfect buildings visited by confirmed cases,” he adds.

To says the union also struggles to collect data of infected cleaners.

“The Centre of Health Protection does not always reveal occupations of infected cases. For example, there was an infected cleaner who worked at a public refuse collection point, but the centre only mentioned that the case ‘visited’ the collection point,” he says.

“We can only wait for infected cleaners to approach us instead of actively reaching out to them,” he adds.

“We can only wait for infected cleaners to approach us instead of actively reaching out to them.”

According to To, even if cleaners are infected, they may not be compensated as COVID-19 is not an occupational disease for cleaners.

“It is very difficult for cleaners to prove that they have been infected at work unless there is a cluster. If they can’t prove their infection is a work-related infection, they will not be entitled to employees’ compensation,” To says.

He says the union has been calling for COVID-19 to be included as an occupational disease to ensure frontline cleaners receive fair compensation.

But it has been difficult to advocate for cleaners’ rights by organizing collective resistance during the pandemic.

“Regulations on social gathering make it difficult to assemble cleaners for protests and strikes,” To says.

“Right now, (the union) can only conduct researches and surveys to understand cleaners’ struggles and help publicize them through press conferences and media interviews,” he adds.