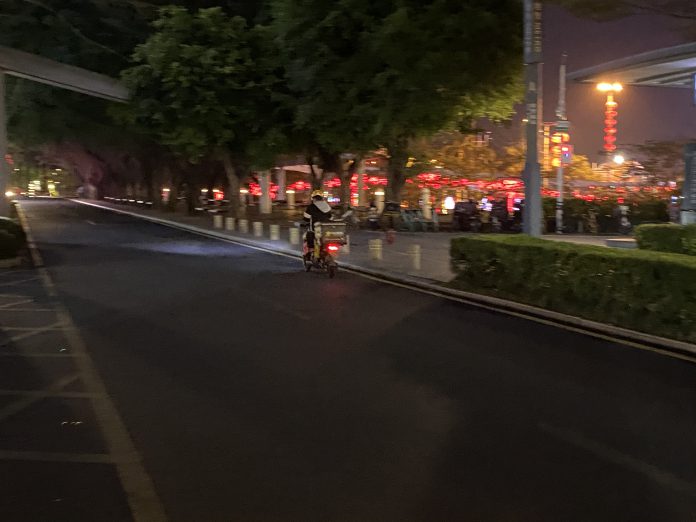 In China, food delivery drivers are working on thin ice under an algorithm with tough deadlines, low wages and little labour protection.

By Jack Deng in Shenzhen

Huang Qi, who has been working in delivery service for seven months in Shenzhen, received his first bad comment in August 2020, which made his work that day totally in vain.

“I was there on time. But the customers were in an argument. No one answered the door when I first knocked, so I had to knock harder. After trying knocking heavier, someone answered and took the food angrily,” Huang recalls.

Several minutes later, the 27-year-old delivery man received a bad comment with no explanation, along with a fine of RMB ¥100 (USD $15.36) from Meituan platform, one of the largest food delivery platforms in China.

According to Huang, taking delivery orders and planning routes are totally taken over by computers. Time cost like waiting for lifts or traffic jam due to bad weather is not considered by the algorithm.

“That’s why every day you see many delivery men riding scooters on traffic roads, even if it is illegal,” says Huang. “People will get hit and injured or even killed, but time limit imposed on us forces us to do so,” he adds.

“The platform keeps pushing us to become more competitive. But for temporary workers like me, a traffic accident means that we will have to pay bills by ourselves since there is no accident insurance for us.”

According to the “2019 Shanghai Comprehensive Transportation Annual Report”, 560 traffic accidents happened in the first half of the year 2019, and 325 were related to the express and takeaway industries, accounting for 58 per cent.

Huang says most of the delivery men are part-time workers who have no medical and legal protection. The number of full-time workers is very small.

“The platform keeps pushing us to become more competitive. But for temporary workers like me, a traffic accident means that we will have to pay bills by ourselves since there is no accident insurance for us,” he says.

Under Meituan’s operation policy, if a delivery man keeps receiving bad comments, his or her platform account will be shut down and he or she will not be assigned with any more orders.

Algorithm with No Common Sense

Same as Huang, Zhang Yirong, 41, is also a temporary worker for the same digital delivery platform. He received his first bad comment in January 2021 after working in the industry for three months.

“The platform assigned six orders to me that day. But after I finished the second order, the restaurant for the third order told me to wait for at least 15 minutes for the food,” Zhang recalls.

A 15-minute-wait meant all other orders would be delayed. Zhang then received three bad comments even after having called these customers to explain.

“I can understand why the customers were angry since they were hungry, and I was late. But I think the restaurant should be blamed in this case. Delayed order was due to their low efficiency, but I had to pay for their bad service,” Zhang says.

Zhang hopes legislation should be introduced so that delivery men can have better labour protection.

“The company shifts all responsibilities to us instead of making a deal with restaurants. But overall, we delivery men are thankful for the platforms. They do provide job opportunities for millions of people,” Zhang says.

Varsity tried to contact Meituan, one of the largest food delivery platforms in China, but no reply has been received.

Ma Liang, a professor in the school of public administration and policy of the Renmin University of China, describes these food delivery platforms as “sweatshops”.

“When these platforms design their algorithms, they do not consider feelings of these delivery workers…These platforms are using punishment as the main way of managing in order to lower operation cost,” Ma says.

“Delivery workers are not organised and that makes these platform operators even more powerful. The workers do not have labour unions to speak out and bargain for them.  They are largely in a position to be ‘slaughtered’ which is very detrimental to them. So even if they have difficulties, usually they cannot make their voice heard,” Ma adds.

According to research by the Wangjingshe E-commercial Research Centre, which is also known as the Chinese e-commercial Bloomberg, published in 2019, the number of employees in China’s delivery industry surpassed 10 million.

“When these platforms design their algorithms, they do not consider feelings of these delivery workers…These platforms are replacing management with punishment to lower operation cost.”

“The government should ask platform operators to pay insurance for takeaway riders, clarify the main responsibilities of platforms, and establish a mandatory system that requires these operators to offer workers insurance,” Ma says.

Ma also asks consumers to have empathy for delivery service workers. “A bad comment can ruin the day for these workers,” he says.