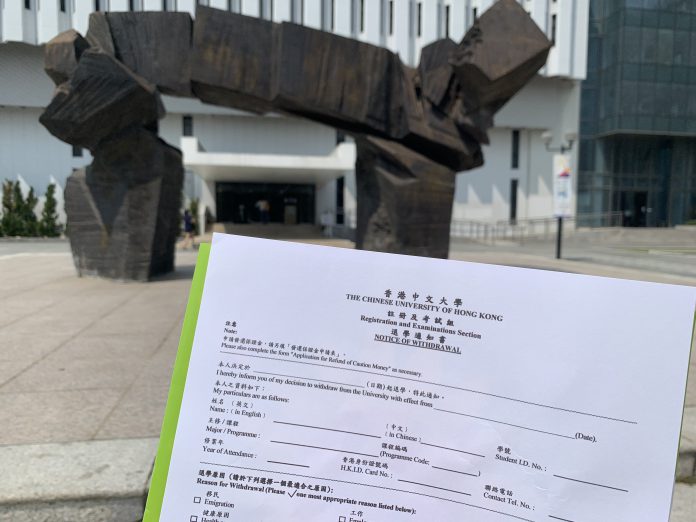 Hong Kong sees an uptick in withdrawals from university in recent years, leading to concerns over the city’s education and future planning system for students.

Studying at the University of Hong Kong (HKU) is a dream to many, but Hugo Wu Ho-kong quitted and retook the university entrance exam in 2020.

Hoping to study Chinese language and literature at the Chinese University of Hong Kong (CUHK), he withdrew from taking a Bachelor of Arts at HKU in June 2020.

“Being a Chinese teacher is my dream. I know that the employability and training of Chinese major graduates from CUHK are better than HKU,” the 19-year-old student says.

“Although my learning experience in HKU was pleasant, I heard from my friends that the curriculum design of CUHK is better for preparing myself to be a Chinese teacher,” he says.

Wu withdrew from HKU and retook the Hong Kong Diploma of Secondary Education (HKDSE) in 2020 under huge pressure.

“I must withdraw from HKU in order to be eligible to apply for university place allocation in 2020. (But) if my examination results were not better than my first try, I could not be admitted to my favourite degree programme,” he says.

“Also, my parents did not understand nor support my decision. They were afraid that I could not get into CUHK this year and would end up sacrificing the HKU degree for nothing,” he adds.

Wu’s dream came true in August 2020. He is now studying Chinese language and literature at CUHK.

“The year in HKU reassured my interest in Chinese language. It is totally worth it (to drop out of HKU) when I think about my dreams,” Wu says.

“The year in HKU reassured my interest in Chinese language. It is totally worth it (to drop out of HKU) when I think about my dreams.”

Withdraw to Take a Mental Break

The former HKU medicine major student is now a second-year veterinary medicine student at the City University of Hong Kong.

Chan took a gap semester in December 2018 due to emotional problems brought by inability to adapt to university life.

She then went on a trip to France alone and decided to drop out of HKU a few months later.

“Coming to the decision was a struggle. My secondary school teachers did not agree with my decision as they wanted to use my achievements for promotion and student recruitment,” the 21-year-old student says.

Chan is an animal lover, but she did not think of studying veterinary medicine in university before.

“I only followed my teacher’s advice when I filled in a form for my university programme choices. I did not know much about other majors,” she says.

She started to think of studying veterinary medicine when volunteering in an animal shelter in Hong Kong after her withdrawal. She enjoys interacting with animals.

“When I look back, (withdrawing from university) is just a small matter in my life. Studying something I like makes me feel happier,” she adds.

Withdraw to Explore the Workplace

While some university dropouts choose to retake public examinations or take a rest, some join the workforce after their withdrawal and return to campus after a while.

Loras Lam Long-hin, 21, was admitted to HKU to study accounting and finance in 2017. But he withdrew from the university in November 2018.

“Being an accountant was my childhood dream. I was very happy at first to be admitted to my dream programme,” he says.

“But after I joined different activities in university, I realised that I do not want to work with numbers for the rest of my life. Instead, I found my interest in marketing and design,” he says.

Lam’s parents supported his withdrawal from HKU to explore his interests. After that, he worked as a sales assistant at Manner Production, a video production company, for eight months.

“I learnt a lot during my work and even had a chance to take part in their video production as an actor,” he adds.

Lam was admitted to journalism and communication major at CUHK in 2019.

“My working experience strengthened my critical thinking skills. I found my passion in advertising and creative media after working in the video production company,” he says.

In the 2018-19 academic year, a total of 1,474 undergraduate students withdrew from Hong Kong’s eight publicly-funded universities. In 2019-20, the figure rose up by 22 per cent to 1,804, according to data released by the University Grants Committee.

While the city sees a surge in university dropouts in recent years, the main causes of student withdrawals remain unclear.

Ng Po-shing, a student guidance consultant from Hok Yau Club, a student counselling group, thinks that the major reason for students to withdraw from university is students do not know where their passion lies.

“Secondary schools focus on training students to sit for public examinations rather than telling students about university majors and future planning,” he says.

He also thinks that students’ habit to search for information online affects their decision-making process.

“Some online content on university majors is misleading. The algorithm pushes similar content and reinforces wrong ideas of different majors,” he says.

Ng points out that parents and teachers’ influence on students’ values also plays a key role when students think about what to study at universities.

“Some online content on university majors is misleading. The algorithm pushes similar content and reinforces wrong ideas of different majors.”

“They tell students that they must choose a major with a promising career prospect. Students may blindly follow their advice and pick a subject that they do not know much about or a major that they do not like,” he adds.

Impact of Withdrawal on Job Hunting

As a bachelor’s degree is a proxy for competence, dropping out of university launches a different signal to employers.

“Employers always ask students why they withdrew from universities as it is uncommon. They often think that students are immature and have made a mistake when choosing their major,” Lui, who is a career coach, says.

“But if students explain well like saying that the withdrawal reconfirms his or her passion, they may impress the employer and become more likely to be employed instead. But it is hard to explain well,” he adds.

Lui also points out that students who have been admitted to a new programme often keep their old mindset when doing career planning, which gives them a hard time during job hunting.

“But if students explain well like saying that the withdrawal reconfirms his or her passion, they may impress the employer and become more likely to be employed instead.”

“If students still keep their previously planned career paths in mind when they are in their new major, they will have a higher chance to encounter problems when finding jobs,” says Lui.