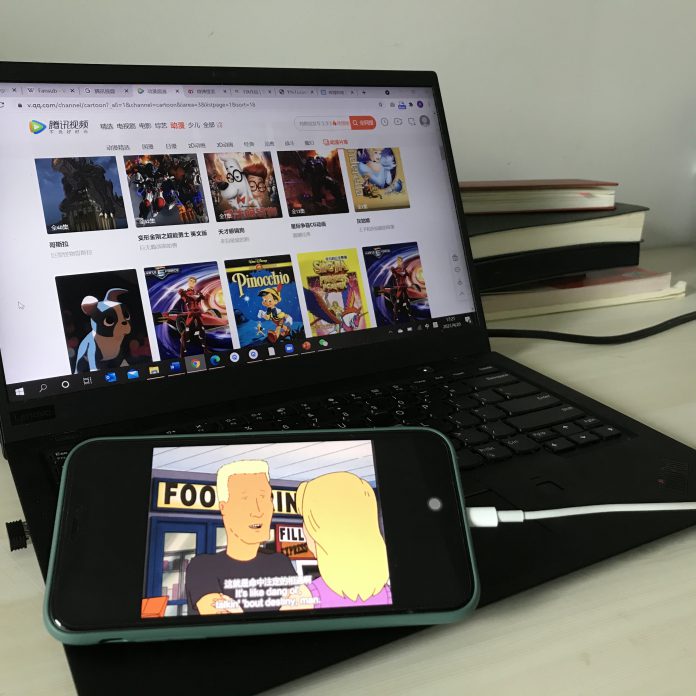 When Nanmu Zhang was in middle school, he watched The Simpsons with Chinese subtitles in order to understand the American cartoon.

He thinks it is impossible to watch American cartoons via state-owned television channels in China in the foreseeable future.

“For American TV shows like Family Guy and American Dad!, … it is impossible (to watch them on TV in China) because they have sensitive contents,” he says, citing an episode of Family Guy as an example.

“That episode jokes about preference for sons over daughters and baby girls being killed in China. These issues cannot be openly discussed (in China),” he says.

Zhang started to help a subtitle group, which adds Chinese subtitles to American cartoons such as Family Guy and American Dad! three years ago.

He came across this subtitle group when he tried to search for an American cartoon named Brickleberry on the internet. Now Zhang has become the leader of the group. Proofreading is his main job.

“When I have the ability to make subtitles, I hope I can pass on (the tradition of running an internet subtitle group so that others can watch foreign films and TV programmes),” he says.

Zhang says most small subtitle groups in China are not well-organised and members are not paid for their work.

“We select cartoons depending on our personal preference and recommendations from American cartoon fans. We source videos from foreign websites such as RARBG that provide torrent files,” he says.

Torrent files enable one to share files with many on the internet without the need for a powerful server in order to distribute the files.

It takes five hours to prepare subtitles for a 20-minute cartoon episode, starting from finding resources to uploading a video online. “Sometimes the whole process will be finished by only one person in a small subtitle group like us,” he says.

Some video streaming websites in China offer legitimate foreign television programmes with Chinese subtitles. Tencent Video is one of the biggest websites.

It provides more than 600 American TV series in total. Ninety of them are only for paid subscribers, including some popular series like Westworld and Game of Thrones. Other less popular series are accessible for all users.

Audience members can also find some American cartoons such as Disney cartoons and superhero cartoons on this website. But animated sitcoms with sensitive contents, such as criticisms towards Chinese politics, are not available.

Another member of the subtitle group is Mandi Yu who operates the group’s account on Weibo, a Chinese microblogging website. She says subtitle groups enable people in China to watch censored TV production and movies.

She posts news about their latest works on their Weibo account. Audience members can also find information about their cloud service account to get access to their subtitle works.

“(Watching the work by subtitle groups) may be the only chance for the public to get access to the full version (of foreign films and cartoons) without interference or censorship,” she says.

“(Watching the work by subtitle groups) may be the only chance for the public to get access to the full version (of foreign films and cartoons) without interference or censorship.”

According to Chinese Regulations on the Administration of Movies which came into effect in 2002, films are prohibited from containing content that propagates obscenity, gambling or violence, or abetting to commit crimes. Impairing the prestige and interests of the State is not allowed either.

“Usually streaming platforms will delete sensitive content or pixelate some scenes to avoid films and TV programmes being removed from their website. This kind of self-censorship may be stricter (than the censorship conducted by authorities) to avoid any problems,” she says.

The Shape of Water, a film winning Academy Award for Best Picture in 2018, is one example. When it was screened in China three years ago, the leading actress appearing naked in one scene was covered by a black patch which made her looked like wearing a black dress.

“Some contents are censored (on streaming platforms and in cinemas). But the censored contents may be the essence of a production,” Yu says.

“Some contents are censored (on streaming platforms and in cinemas). But the censored contents may be the essence of a production.”

Censorship also exists in social media. Some videos uploaded by subtitle groups are removed from Weibo. “No reason is given when a video is removed,” she says.

Yu points out some opinions and values discussed in some cartoons are related to politics, liberty and democracy. “I hope we can instill these opinions in our audience by sharing these kinds of cartoons,” she says.

Fang Kecheng, assistant professor at the School of Journalism and Communication at the Chinese University of Hong Kong, says that subtitle groups in China are platforms where people share resources.

“The presence of control over the introduction of foreign films gives birth to smuggling activities.  Subtitle groups can be described as smugglers of information,” he says.

He thinks whether video streaming platforms such as Tencent Video and iQIYI Video will introduce a foreign work is a commercial decision. They will consider the tradeoff between the risk of censorship and profit generated by the introduced content.

“Some films and TV programmes like American sitcoms are not profitable enough. Yet, the risk of screening such kinds of TV programmes is high,” he says.

Fang also mentions some companies and platforms are practising self-censorship to avoid potential political risks. “(For example,) House of Cards (introduced by iQIYI Video) touches on issues related to China. It may be deleted before coming online,” he adds. Fang says obscure subtitle groups are less troubled by censorship from authorities, so the groups pay less attention to self-censorship. Those niche and voluntary small subtitle groups will introduce more diverse TV and movie productions to Chinese audience members.