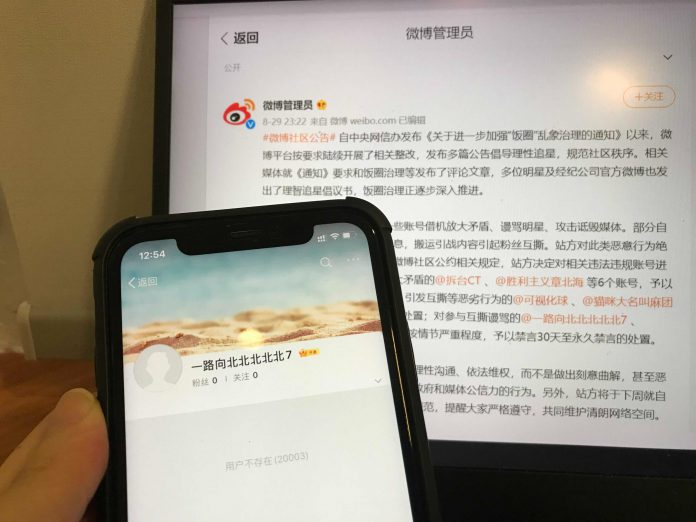 Fans have mixed feelings about Qinglang campaign that cracks down many online fan activities.

Jessica Liao found three of her Weibo accounts were banned in early October 2021. The three accounts cost her RMB ¥45 (US $7.05) on Taobao, a Chinese online shopping platform, in September 2021.  She bought the accounts to increase traffic data for her idol on Weibo, a leading social media platform in China.

“Each of them had 500 followers. I could [use them] repost a post [by my idol] for 100 times without being stopped [by Weibo censorship system],” she says.

“Idols’ popularity can be quantified by numbers [including the amounts of likes, reposts and comments]. Fans want to boost their idols’ popularity. It can help an idol’s career,” Liao adds.

Despite her strong attachment to her idol, Liao declines to disclose his name. She explains that she does not want to associate her idol to a male group survival show he participated early this year. “[That survival show] was unfortunate [with a bad reputation],” she says.

“IDOLS’ POPULARITY CAN BE QUANTIFIED BY NUMBERS [INCLUDING THE AMOUNTS OF LIKES, REPOSTS AND COMMENTS].”

To drive traffic to content related to her idol, Liao once had more than 10 Weibo accounts. She was only one of the many fans in China engaging intensively on social media platforms to promote their beloved singers or actors.

But such moves are not allowed anymore. On June 15, 2021, the Cyberspace Administration of China (CAC) launched Qinglang campaign (清朗) to put an end to the “chaos” involving online fan clubs.

One of the chaos is reportedly about an idol survival show called Youth With You 3 produced by iQIYI, a major video streaming platforms in China. An idol survival show is a reality TV show in which participants compete to get a place in an idol group that is going to debut by the end of the show. A video showing people believed to be fans pouring bottles of yoghurt drink down the drain went viral in May. The fans wanted to scan QR codes inside caps of bottled drinks in order to vote for their idols.  The video which cannot be confirmed has triggered an intense backlash online.

Online fan clubs also make similar statements on Weibo and rename their accounts to avoid being suspended. Words such as ‘fan club’ are removed from their account usernames.

At the end of August, fan club account of Zhao Liying, a popular Chinese actress, with more than 2.5 million followers on Weibo was banned temporarily by Weibo’s censorship system. Before the account was banned, an online verbal fight broke out between fans of Zhao Liying and another actor, Wang Yibo. Zhao’s fans wanted to remove Wang from appearing in a new TV show featuring Zhao, as previously a TV show having both of them was not well-received by the audience.

Fans then realised self-censorship will be necessary to avoid having accounts being closed.   They delete or turn perceived sensitive Weibo posts with abusive words into private posts. Hashtags are also restricted to avoid being identified as “manipulating social media comments”.

“I was too lazy to do [self-censorship]. I have too many posts on my accounts,” she says.  After several weeks, she found her account containing posts with these “sensitive” words work as usual. “So [fans were] like scaring ourselves,” she says with a laugh.

Before the Qinglang campaign, online fan clubs encouraged fans to write comments about their idols and repost them as much as possible to increase traffic data related to their idols.  Fans now stop doing reposts, as Weibo cancelled ranking lists of celebrities’ popularities in August due to the crackdown.

Although fans now have to follow stringent rules, some fans like Liao see the bright side of the campaign. They spend less time on writing comments and reposting online.

“The campaign saves my time … Now we mainly chat in our [fan] group,” she says.

Fans also have stopped contributing money to idols directly with apps like Taoba (桃叭) and Owhat now as the campaign bars variety shows or entertainment businesses to charge fans for star-chasing.

“[OFFICIALS FROM MEDIA COMPANIES] PLAY DUMB, BUT I THINK THEY KNOW WHAT THEY ARE DOING WHEN THEY MANIPULATE FANS TO MAKE MONEY.”

Yvonne Lin, a fan and also a fresh graduate, tries to cover all costs of star chasing by herself. Her idol is Liu Yu, a candidate who attended Chuang 2021, an idol survival show produced by Tencent this year. She thinks minors should not make a monetary contribution because their money comes from their parents.

But she also acknowledges that sometimes it is hard to avoid spending money on idols. “Rules of survival show require fans to contribute money to help their idol debut. The regulation is established [by the programs], and fans can only follow the game rules,” she says.

“[Officials from media companies] play dumb, but I think they know what they are doing when they manipulate fans to make money,” she adds.

Jing Zhan, associate professor of the Department of Government and Public Administration at the Chinese University of Hong Kong, thinks idol survival show is an effective business model that entertainment industry has built in recent years.

“Companies are driven by profit … but they will have to face some government restraints during the Qinglang campaign,” she says.

Zhan also thinks that it is hard to evaluate the long-term effect of the Qinglang campaign this year. “Sometimes the government introduces some policies and does not enforce them continuously. Then the effectiveness will depend on the conscious behaviour [of companies],” she says.