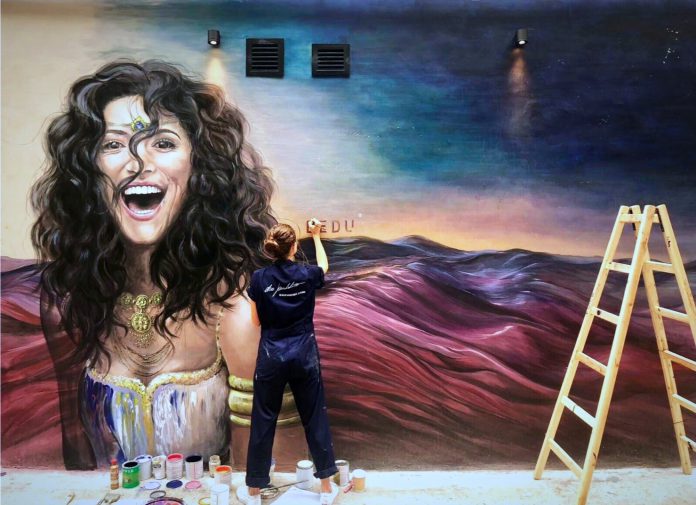 While more French people leave Hong Kong during the pandemic, some are determined to stay in their adopted homes.

Born and raised in France, Elsa Jeandedieu came to Hong Kong alone in 2008 at the age of 24, upon an invitation from a childhood friend who already settled in the city for work. She decided to stay permanently after living in Hong Kong for a year.

Jeandedieu never thought of going back home, even when she struggled to keep things afloat after setting up her studio in 2015.

“When there is a challenge, I never give up. I do not want to go back to France because that would mean it is a mistake to live in Hong Kong. I want to stay here until I succeed and manage to make something with my art,” the muralist says.

Street painting allows me, a foreigner who does not speak Cantonese, to connect with the local Chinese.

Now 38, Jeandedieu is a well-known mural artist in Hong Kong. Many of her brightly coloured wall paintings, featuring big smiling faces, can be seen around the streets of Hong Kong Island, such as outside Bedu Restaurant on Gough Street and next to Lush on Cochrane Street.

“Street painting allows me, a foreigner who does not speak Cantonese, to connect with the local Chinese,” she says.

Jeandedieu has been in Hong Kong for 13 years and she plans to stay on. “I am not ready to leave Hong Kong. If I have to move elsewhere, I do not know where I could go,” she says.

Besides painting, Jeandedieu also loves to swim and run long-distance. When she is outdoors, she finds inspiration in Hong Kong’s natural scenery and feels more motivated to paint.

“I love the nature of Hong Kong. I can swim in the ocean in the morning or hike a trail after work, and I can [only do that in Hong Kong],” Jeandedieu says.

“I know a lot of French people who have been here for more than a decade. Everybody finds something they like about the city,” she adds.

Just like Jeandedieu, Madeline Progin, who owns a French bookshop in Central, thinks Hong Kong’s unique mix of nature and urban skyscrapers makes it a great place to live.

But now at 68, she has been debating her future in Hong Kong after having already lived here for over 40 years.

“I am nearing the age of retirement and I think I should go back [to Switzerland], but I cannot leave this place. The bookshop is a commitment and Hong Kong is a city you get attached to,” she says. For now, Progin decides to stay, continuing to watch over the shop.

I am nearing the age of retirement and I think I should go back [to Switzerland], but I cannot leave this place.

The bookstore, called Parenthéses, is a social hub for the French and other French-speaking people.

“The name [Parenthéses] means a bracket, or a bubble, that separates you from the busy and noisy streets. You are not in Hong Kong, but in a small world that is a bit of France. Everybody here speaks French, and we usually have a French radio playing in the background,” she says.

Progin’s bookstore also hosts sharing sessions with French and Chinese writers ever so often, providing a space for the French-speaking in Hong Kong to learn and socialise.

“Being here for more than 30 years, the bookshop creates a link between France and Hong Kong,” she adds.

More people start to explore Hong Kong and visit the bookshop due to COVID-19 travel restrictions. Many French parents brought their children to the shop to read and relax in the past two summers, when customer traffic is usually low due to people traveling during the summer break.

COVID-19 travel restrictions might have boosted the number of visitors to the French bookshop, but it has made more French people leave the city.

“COVID-19 made people rethink their plans of living abroad. Companies also realise they can operate from home and cut jobs. [There are many uncertainties currently] and people are thinking of leaving. It is a phase we have to adapt to,” says Jean-Sebastian Attié, executive director of Alliance Française Hong Kong (AFHK).

At Parenthéses, customers stop by to bid farewell to Progin before going back to their home country.

“[Foreigners leave Hong Kong] almost every day now as the COVID-19 restrictions tighten. People want to leave because they are not able to visit their families abroad. It is sad, really, but I do hope for positive change,” Progin says.

Members of the European community have objected to the government’s strict restrictions.

Upon the announcement, the European Chamber of Commerce in Hong Kong issued an open letter to the chief executive. “…Hong Kong must open itself sooner rather than later or this new quarantine regime could lead many in the international community to question if they want to remain indefinitely trapped in Hong Kong when the rest of the world is moving on,” Chairman Frederik Gollob writes.