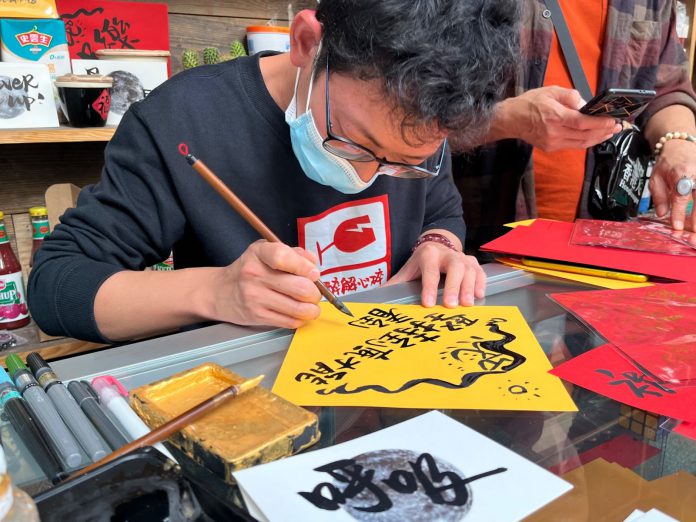 Calligraphy artist Kwan Man-lung plays the role of a therapist by comforting troubled souls with his magic brush.

In 2021, Kwan helped a woman who shared her story about having a miscarriage and suffering from depression at a calligraphy event.

“I wrote ‘We trust that destiny will bring us a better life’ with my brush to encourage her at the event. The woman found strength in my calligraphy. She later was pregnant again with a baby girl.  She visited me to tell me about the good news after a few months,” he recalls.

“I feel touched when people share their thoughts with me and find warmth from my calligraphy. I hope my art can bring happiness to others. This is a mission I am committed to,” he says.

“I feel touched when people share their thoughts with me and find warmth from my calligraphy. I hope my art can bring happiness to others. This is a mission I am committed to.”

Kwan usually categorises people with different kinds of worries in folders in his mind to help others efficiently.

“Relationship problems are saved in one spot in my brain and workplace problems are stored in another folder. I take ideas out when I need them,” he says.

“When someone shares his or her worries with me, I am all ears and I give them advice sometimes by thinking in his or her shoes to understand them. This gives me ideas when I am writing calligraphy for them,” he adds.

Kwan mostly writes encouraging messages for others with his calligraphy such as: “Believe that everything is the best arrangement” and “Never forget why you started and there will be reward. There is always light for us”.

“The most important elements in my calligraphy are humour and memes that can help those with worries to relax and stay positive,” he says.

Kwan thinks calligraphy is the combination and variation of Chinese characters. He was inspired by Japanese and Chinese calligraphy that he absorbed their characteristics to create his own calligraphy.

The Career of Therapist

Kwan develops different calligraphy styles and fonts style by finding inspiration from anime, games, Japanese music, Cantopop and films by Wong Kar-wai. They also help him to think of what kind of painting to go with his calligraphy.

“Writing and drawing are my hobbies. When I was in secondary school, I usually helped to create artistic fonts and design backdrops and posters,” Kwan says.

The 34-year-old artist has been working as a full-time calligraphy artist with the name Dark. Kenjamin since the end of 2015. Kwan says the nickname means driving away darkness in everyone’s heart.

“My motto is ‘practice makes better, but not perfect’. So through consistent practice, I wish to transform my own and others’ negative vibes and worries into my creative calligraphy which can bring comforts to my clients,” he says.

“Black is the colour that I use most frequently to express my emotions and the colour I am most familiar with,” he adds.

Before being a full-time calligraphy artist, Kwan tried working as an office clerk, a salesman and a shop assistant.

Now he sets up stalls in marketplaces to sell calligraphy writings, designs Chinese fonts for company brands and advertisements and organises talks and workshops about calligraphy to make a living.

“My income depends on how many calligraphy projects I have every month. It is quite unstable. The pandemic makes it more difficult to host workshops and sharing sessions,” he says.

Kwan thinks financial support is not the only way to show appreciation of art creation. He also values the interaction with people sharing worries with him during calligraphy promotion.

“Some people simply buy my calligraphy artwork without talking to me. Sharing ideas is important for promoting art and creating art,” he says.

“Sharing ideas is important for promoting art and creating art.”

Kwan hopes more people can learn about calligraphy so that it can be shared and developed in other parts of the world.

“There are many passionate calligraphy artists in Hong Kong. I hope more people can appreciate their artwork and show support to their works,” he says.