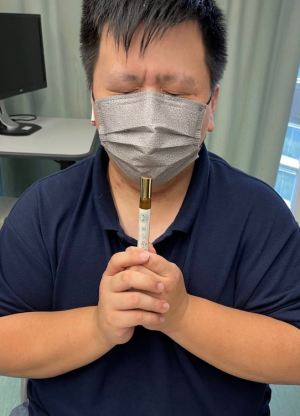 A blind man gets his life back with a fragrance company.

Holding his guide dog, Wan Tsz-Yin sets off to his fragrance company. From Tuen Mun to Prince Edward, his flurry companion Remy accompanies him, so that he can walk faster to catch a bus without hitting obstacles along the way.

“Remy now stays home during the pandemic to avoid infection. So sometimes I have to go to work alone,” say Wan, whose left eye has blurred vision and his right eye is completely blind.

At 10:00 am, the 32-year-old fragrance company founder starts doing measurements and mixing essential oils of different flavors together with cream to create products with different functions.

“I can easily tell the smell of lavender and orange, but I always mix up pine and cedar. It takes time to remember all the scents I work with,” he says.

Accurate measurement is the key to making aroma oil. But it is a difficult task for Wan and his colleagues.

As the concentration of essential oils varies in different products, the speed of adding them has to be adjusted. Wan says his team has spent a lot of time looking for the best apparatus for accurate measurement.

“Most of my colleagues are only left with around 10% of their eyesight. We use small droppers to have better control of the amount of essential oil added. Colleagues who have better vision do measurement while others pack products,” Wan says.

“We also have to hire someone from an accountant firm to handle paperwork for our company registration, as all of us cannot read due to eyesight problems,” Wan says.

Wan was not born blind. In 2008, he was diagnosed with a brain tumor that pinched his nerve, causing his blindness. He was 19.

“I was admitted to a hospital for a few months. I did not expect that I would be blind at that time,” he says.

Wan recalled his whole world turned “black in color” when he stepped out of the hospital.

“I felt like I was a burden to my family. I stayed home most of the time for the first six months after being discharged. I felt worthless as I could not take care of myself. I could not even eat on my own. I cried every day,” he says.

His family sought help from some non-governmental organizations (NGOs) which offers help to people with eyesight problems.

“People there (NGOs) taught me some basic life skills such as taking showers and dining. I started learning how to take care of myself,” Wan recalls.

Wan says it took him three to four years to accept the fact that he is blind and move on.

He started joining different rehabilitation courses in the same year, such as learning how to be a visually impaired massage therapist.

“But I still did not know what I could do in the future at that time. I wondered if massage therapist was the only thing I could do,” Wan says.

Data from Census and Statistics Department of Hong Kong Government shows that the unemployment rate among people with eyesight difficulty in 2021 was 88.8 per cent.

There were about 47,600 people in Hong Kong who had eyesight difficulty, accounting for 0.6 per cent of the Hong Kong population in 2021.

Wan eventually did not work as a massage therapist and founded his fragrance company in 2021.

“My friend asked me to use lavender aroma oil to put myself into a good sleep when I came across some family problems back in 2016,” Wan says.

After using fragrance products for six years, he joined a fragrance making course and a teacher there joined her students to set up their fragrance company.

“I think it might be a new career path for the visually impaired, so I want to give it a try and see if it works out for me. That is how I started my company,” he says.

Wan is also thinking about starting his own social enterprise, offering more job opportunities to people with eyesight problems to work together.

“I hope it can provide a working environment for people with visual difficulty where they do not have to worry about making mistakes and being discriminated. A workplace that will help them thrive,” Wan says.