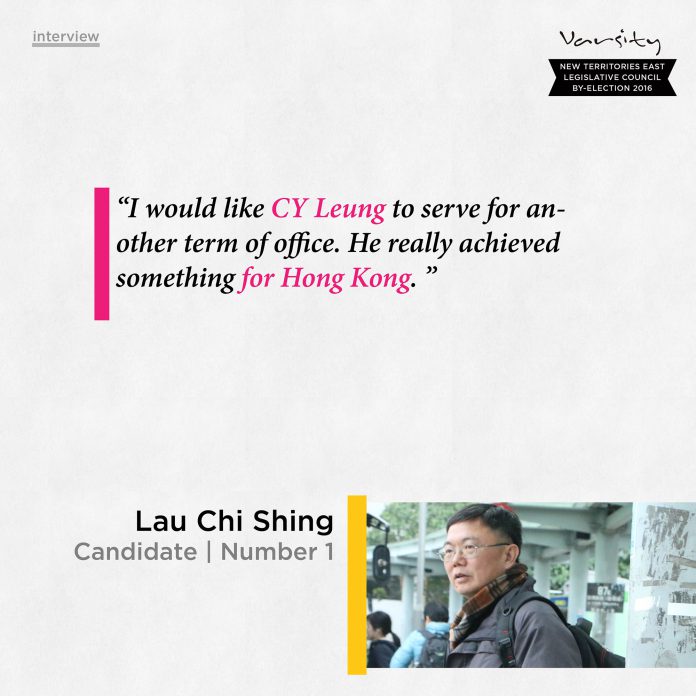 Company director Wilson Lau Chi-shing says he is the only candidate who lives in Eastern New Territories and can solve the problems that residents face.

Lau says his personal experience spurred him to join the by-election. When he travels between the Mainland and the New Territories, he sees problems like the MTR raising prices and experiencing frequent delays. He says other candidates can’t see these problems as clearly as he does because they don’t live in the area.

“I have been knocked down by parallel traders and their trollies and argued with them,” Lau says.

Lau says that he has an additional advantage—he is one of three independent candidates in the by-election. As someone who is neither pro-establishment nor a pan-democrat, Lau says he can work as a mediator if he gets elected to the Legislative Council.

“Both camps focus on tiny details and refuse to negotiate. That’s why they can never reach a consensus,” Lau says.

He says he wants to balance the views of both camps to serve Hong Kong.

Lau also stands out from the other candidates as an open supporter of Chief Executive Leung Chun-ying. He says he backs Leung for re-election.

“Unlike Mr Chow (Holden Chow Ho-ding, the pro-establishment candidate) who keeps refusing to show his support for CY Leung, I would like Leung to serve for another term of office,” Lau says. “He really achieved something for Hong Kong. Some might criticize him for not following protocol. But he really did solve some problems instantly, like the housing problem, anchor babies in Hong Kong, and the milk powder craze,” he adds.

He says not everyone opposes Leung and that the opposition is exaggerated. He says some people echo his views that Leung has achieved something.

“The problem lies with the bureaucrats around him. They did not work for him earnestly,” he says.

Lau says Hong Kong’s problems could be solved much more easily if government officers do their best to help the chief executive.

The by-election will be held on Sunday February 28.