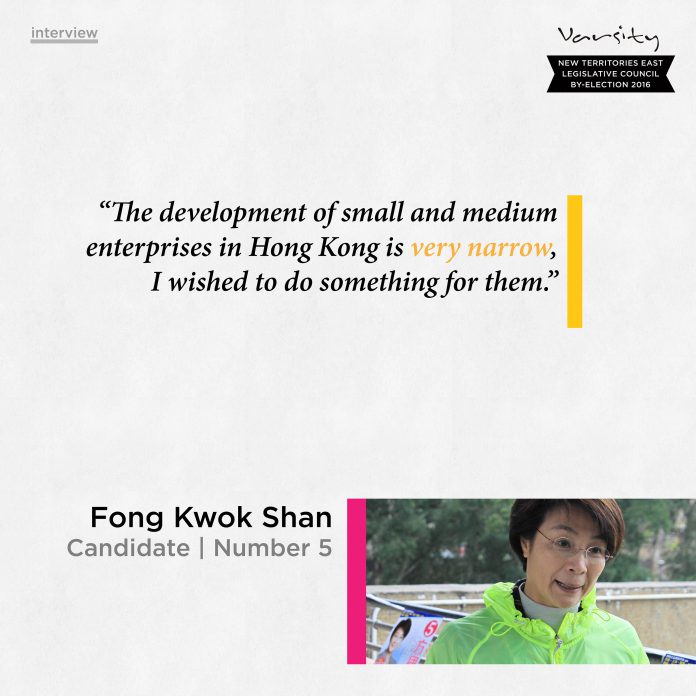 Her election flyers feature a picture of a teenaged Christine Fong Kwok-shan playing the role of the boy-deity Nezha, holding two golden rings and a fire-tipped spear. In Taoist folk tales, Nezha rides through the sky on “wind fire wheels” and defeats the Dragon King.

But in real life, says the former child actor turned engineer and district councillor, her feet are placed firmly on the ground. And she is hoping her down-to-earth approach will win bring her success in Sunday’s New Territories East by-election.

Fong says her strategy of reaching out to people in their everyday life helped her to get elected to the Sai Kung district council in 2011 with a whopping 87 per cent of the vote. This time, she is also running on livelihood issues such as proposals to  improve the railway network and enhance transport connections in the North District.

Standing as an independent, she explains her campaign slogan “third power” means “Not parroting, not blindly following what others do.”

Before Fong struck out on her own, she  joined the Liberal Party in 2004. She says she was running a small business at the time and did not see anyone representing small and medium sized enterprises. “The development of small and medium enterprises in Hong Kong is very narrow, I wished to do something for them,” explains Fong.

However, she quit the party in 2010 after falling out with chairman James Tien Pei-chun. Fong says the party was very different to what she had expected. “They didn’t really have commitment to society, they were too opportunistic, treating it as a business,”she says.

As for the Mong Kok clashes, Fong believes it was a result of accumulated public anger. She says there is a huge divide between Hong Kong’s young people and the older generation.  “Those who are aged in their sixties and seventies experienced hard times so they want stability and peace now. Although there is a generation gap between myself and teenagers, I can understand them and feel for them as I also stand in the front line,” she says.

Fong says she will communicate more with young people and that she is empathetic to their experience of being beaten by police in protests.

As for her chances in Sunday’s polls, Fong says she is confident she can  get at many more  of the votes than she received in the 2012 Legislative Council Election, when she got 24,594 votes.