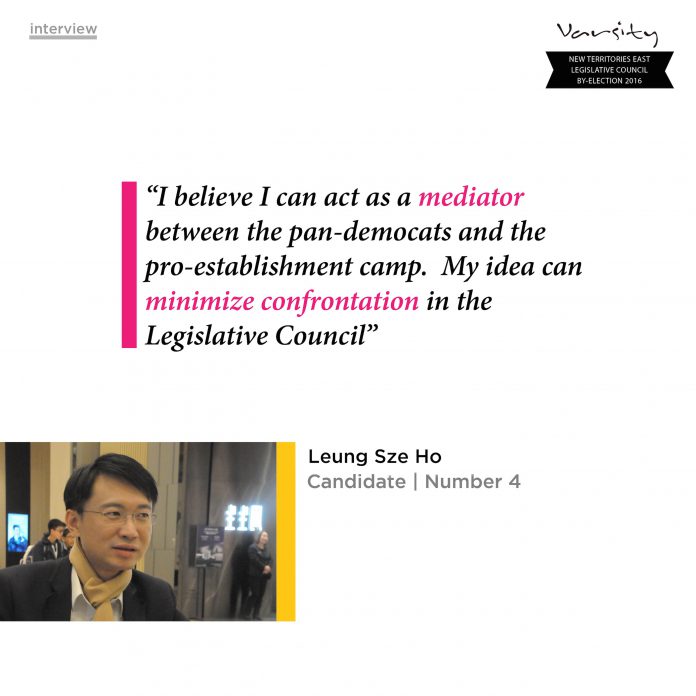 Leung says the key is to modify the rules of procedures after he gets elected to the Legislative Council.

Barrister Albert Leung Sze-ho was the last candidate to submit his nomination for the upcoming New Territories East by-election. He claims to be an independent candidate, though he is the director of two member unions in the pro-Beijing Hong Kong Federation of Trade Unions.

“I am no longer in the pro-establishment camp.” Leung says.

When asked about why he joined the election so late in the game, Leung says the key is his idea to change the rules of procedure in the Legislative Council. He says that’s better than what pro-establishment candidate Holden Chow Ho-ding has to offer.

“(My idea) can balance the views of pan-democrats and the pro-establishment, fostering social harmony,” he adds. “I brought up the idea in November and declared my intention to enter the race. However, after a discussion, the pro-establishment camp said Chow would be the most suitable person.” He also says that if he were elected, he would compromise with the Labor Party and the Democratic Party.

“We do not need (Legco president) Jasper Tsang-Yok sing’s vote if I can get their support.”

Leung adds that the 2016-17 Budget, which was released the day before our interview, is not as good as it could have been because it does not encourage communication between different parties in Hong Kong.

“The budget has nothing to say about fostering harmony and communication in society. CY Leung (Chief Executive Leung Chun-ying) kept condemning the protestors, did not encourage communication, and does not think that the protests started because of social problems. John Tsang (the financial secretary) is just listening to his boss.”

He says that social problems led to the recent protests in Hong Kong, and that the government just condemns what people do without trying to communicate, like a bad teacher.

“When students do something wrong, teachers can hit and beat them and scold them for being rebellious. But that ignores the fundamental problem – they used the wrong teaching method in the first place.”