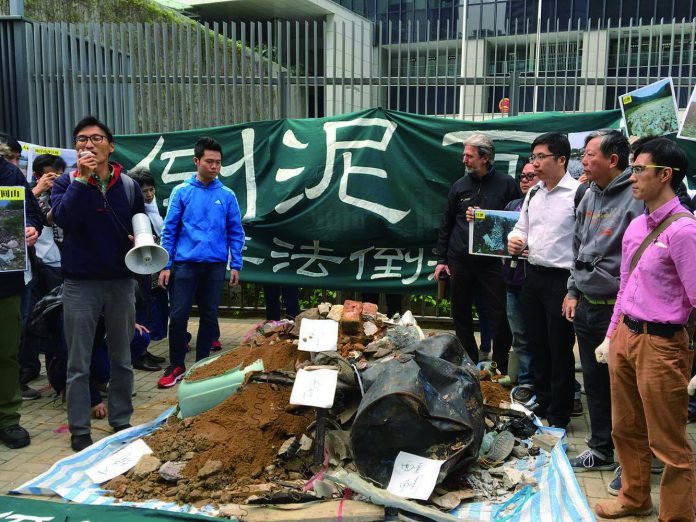 In an open space outside the Star Ferry Terminal in Tsim Sha Tsui, a young man stands holding a microphone, a loudspeaker at his feet. Behind him a roll-up banner bears the slogan: “Vote for a Green Hong Kong”. Around a dozen other young people around him wear T-shirts printed with the same slogan. Some of them hand out leaflets to passers-by and others hold up boxes with “Leaflet Recycle Box” written on them.

This is a flashback to 2008, when the then 28-year-old Roy Tam Hoi-pong was campaigning for election to the Kowloon West Constituency in the Legislative Council as an independent candidate.

Tam has been interested in environmental protection since he was a student at the Chinese University of Hong Kong where he studied Environmental Science. He joined green student groups and published a student magazine to promote environmental awareness on campus. In 2004, he founded Green Sense, a watchdog non-governmental organisation (NGO) aiming to monitor environmentally unfriendly policies.

Looking back, Tam says he was just a “pure environmentalist” at the time, who could steer clear of politics. But the more he confronted district councillors on district affairs, the more he realised politicians had the power to push green policies and to reject non-environmentally friendly ones.

“It struck me then that instead of being the one protesting and handing over petitions, why not be the district councillor instead?”

Tam decided to contest the 2008 Legislative Council election as an environmentalist but lost resoundingly. He thinks this was down to his being a complete unknown back then, and because he was campaigning on a single issue –environmental protection.

While he continued to address green issues, Tam also started taking part in other social movements and campaigns with a localist slant, such as demanding restrictions on the Individual Visit Scheme for mainland visitors. In 2014, he joined the Neo Democrats, a breakaway party founded by former Democratic Party members who stressed localist values. Last year, Tam ran in the district council elections as a Neo Democrat candidate and won a seat in Ma Wan in the Tsuen Wan district.