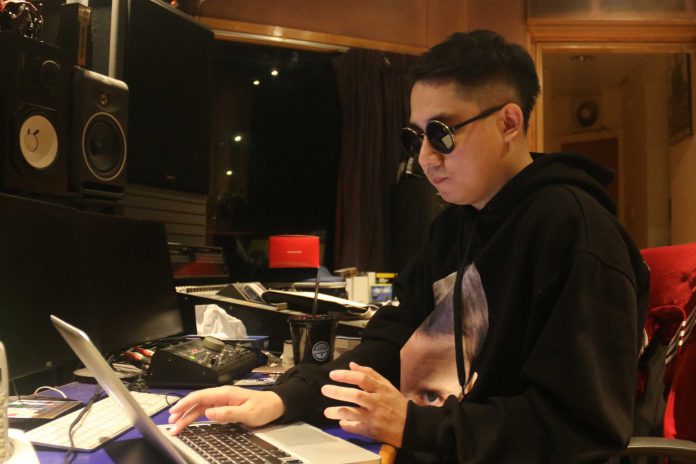 In a studio located in the same buildings as three hourly “love” hotels, a man in a hoodie and a pair of big round black-framed sunglasses is editing the tracks of a new song in front of two computer screens.

The unassuming studio, known as 2nd Floor Back Suite after an album by legendary local rock band Beyond, is rich in Hong Kong music history. This, after all, is where Beyond spent most of their time producing music and this is where the man in the glasses, rapper MastaMic, holds sway – at the invitation of Beyond’s Yip Sai-wing, who owns the place.

MastaMic, or Master of Microphone, is a 30-year-old Cantonese rapper. For those who have watched RTHK’s satirical show on current affairs, Headliner, MastaMic is the voice behind many of the rap songs skewering local politics.

MastaMic first got into hip-hop at secondary school. His friends were listening to Suede and Oasis, but he was more attracted to the wave of hip-hop music hitting Hong Kong at the time, through artists like Eminem and local outfit LMF, in addition to the associated skateboard culture.

He says there is nothing in particular about his childhood experiences that directed him towards becoming a rapper. But a breakdown in his relationship with his family set a series of events in motion that pushed him towards his current path.

MastaMic grew up in a traditional Chinese family and his parents had high expectations for him. He got satisfactory grades in the public exams but his rebellious nature landed him in trouble at school. He was not exactly expelled, but, “my school used another way to kick me out of school by suggesting that I leave school myself,” he says.

This created a huge conflict with his family, which he thinks was because they thought he had brought shame upon them. “My dad was very determined to kick me out,” he says. Ironically, MastaMic thinks his estrangement from his family relieves him from the pressure of conforming to other people’s expectations. He says many young musicians tell him their families hold them back from pursuing their dreams.

After staying at a hostel for a while and then with relatives, MastaMic eventually continued his studies in the Mainland through a government-sponsored scheme. He attended Wuhan University, where he studied law. “It is rubbish. It has no meaning to me,” he says. He spent most of his time rapping in his room. In his third year, he decided to abandon his degree.

“I heard a voice telling me that I should be a rapper,” he says. At first he was not sure if he really had the commitment but the voice would not go away. He dropped out and returned to Hong Kong.

Without academic or professional qualifications, MastaMic had to push forward with his plan. “I got no choice man!” he exclaims. He started out by busking in Mong Kok’s Sai Yeung Choi Street. Hong Kong audiences had not seen freestyle rappers performing in the street before. He says they had no idea what he was doing. “They were just watching a circus,” he says.

MastaMic says Hong Kong audiences did not respect rapping as an art form and the situation still has not changed. He gets annoyed when he performs in shows where he is asked to rap about anything on demand, including about other participants. “Why don’t you ask [Cantopop group] Supper Moment to sing about the guests?” he says.

It all stems from a lack of respect for and understanding of hip-hop that extends to the music industry. MastaMic was invited to join a record label, CMD, in 2008 but it was a move he regrets because the company was not willing to invest resources to nurture him. Disappointed, he left the record label and started his own, Masta & Co., with a mission to promote urban music in Hong Kong and aid the development of urban music.

In striking out on his own, he trades resources for freedom. The budget for production is tight and he always has to strike a balance between artistic choices and financial constraints. The small scale of the company also makes it harder to reach out to different media and other organisations. Not that it is ever easy to promote hip-hop in Hong Kong, something that is a source of frustration for MastaMic. “Zero, it is zero,” he says when asked if there is a supportive environment for the genre in Hong Kong.

He recalls that once, when he was performing in a bar, the audience started heckling and hissing when the host introduced him as a Cantonese rapper. “Most of you are from Hong Kong. What are you grumbling about?” he countered.