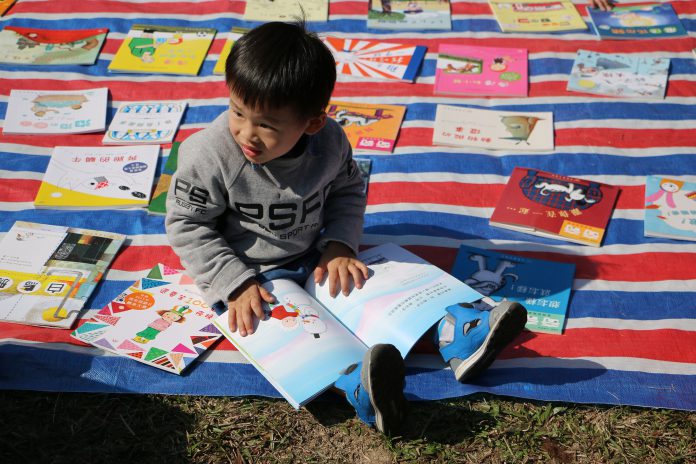 The winter sun shines down warmly on the families gathered for a reading activity at the spacious lawn of the Peak’s Mount Austin Playground. It is a lazy Sunday afternoon, and parents and children bask in the sunlight, reading picture books they chose from a pile on a red, white and blue nylon mat at a picture books and music festival to promote parent-child reading.

Although picture books have been around for a long time, they have only grown in popularity among Hong Kong parents in recent years. According to Ada Ling, deputy manager of the retail management department of Joint Publishing (Hong Kong), sales of picture books had been flat for many years and then, in 2012, they began to increase significantly. Designed for younger children, this genre of children’s books is usually hard-backed and has pictures that take up about 90 per cent of the page.

A father of a two and four-year-old at the reading event says he chooses picture books for his children because they are simple. “They have trouble understanding books with too many words, so they would come ask me about it all the time. But with picture books I just need to give them a little guidance and they can continue reading on their own,” he says.

Picture books are also a way for parents to open their children up to the world without exposing them to technology or the internet, which can be addictive and dangerous. It provides a safe environment for children to learn about their world and how to cope with different situations they may meet in the future, says Adeline Ko Pui-chung, a mother, picture book author and founder of the publisher Picture Books Cultural Industry.

But despite increasing sales, picture books still fall behind other genres. Not a single picture book made it to Joint Publishing’s December 2016 Top 20 bestselling book list, which is mostly occupied by novels, feng shui books and travel guides. Picture books by local authors are also hard to find on bestselling lists of children’s books.

Ko says parents have often scorned picture books. “People are very utilitarian in Asian societies. They think picture books, with few pages and words, are useless in getting their children to learn,” she says.

Parents want children to learn concrete information through reading instead of just reading for pleasure. Even when they buy picture books, they prefer books that are academically instructive. Lift-the-Flap Times Table and Mathematics is Fun (數學好好玩) are some of the top-selling picture books at Joint Publishing.

But Catherine McBride, a developmental psychologist and professor at the Chinese University of Hong Kong, says children only start reading to learn at around eight years old, according to studies in the United States. In Hong Kong, this may happen slightly earlier because children start reading at a younger age. Before that, they are just learning to read. It is important to let young children have positive emotions towards books in order to develop a reading habit, which will help them learn a lot better in the long run.

This is where picture books come in. Children at age one to two years cannot understand written words but find pictures stimulating and more interesting than their familiar home environment. “Young children won’t look at text even when parents want them to,” says McBride. From an evolutionary psychology perspective, she says, it takes effort and is unnatural for humans to look at text because throughout their evolution humans have been geared towards survival. “Learning to read is not something you need to survive. Looking at pictures and the environment is. You need to be able to distinguish what’s going on. It’s very natural,” she explains.

McBride says reading to kids with picture books even when they are one month old is good because babies love to listen to the sound of their parents’ voices before they can understand anything. Parent-child reading is especially important when the child is two years old. The child feels an attachment to reading because books serve as a point for conversation with their parent. McBride says kids always learn through pictures and listening to what parents say, and a live parent is almost always better than books presented on computer screens, even interactive ones. “Computer programmers always like to add little movements, like having a dog move its nose or wag its tail. It’s actually distracting to learning if it’s not related to the text, but adults like it,” she says.

Most of the time, when Hong Kong children are asked questions, they are expected to give one right answer. To stimulate thinking, McBride encourages parents to ask children open-ended questions when reading, such as “What do you think he’s going to do next?”, or “Why is he angry?”.

While picture books may not seem as practically useful as academically instructive books, McBride says the chronology of storytelling is useful for children to learn about timing and structure. They also offer a wider range of vocabulary and teach children different ways of expressing emotions.

She also points out that most of the reading Hong Kong children do in school is very regimented. Children rarely get to choose their own materials to read because homework takes up so much of their lives. She suggests schools allow children more time to pick their own books to read.

Fok Yuk-ying, an associate professor of the Education University’s Department of Literature and Cultural Studies and founder of the Children’s Literature and Culture Association of Hong Kong, says most primary and secondary schools try to get students to read by making them do book reports. “How do you do a book report? It’s easy – by copying. Last summer I was at a bookstore and saw a kid just copying the blurb of the book. He did the book report, but he didn’t read the book,” she says.