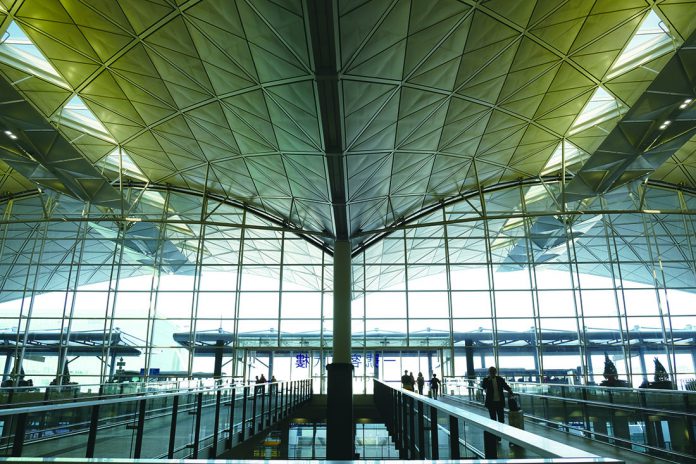 nother aircraft lands and taxis off the runway. A jet bridge is marshalled to the parking spot right way, while fleets of shuttle buses run across the tarmac in the distance. With a daily average of 1,100 flights to and from over 220 destinations, the Hong Kong International Airport (HKIA) is one of the busiest passenger airports around the globe. Yet in recent years, Hong Kong’s pride seems to have lost some of sheen, losing ground to other airports in the region.

According to research conducted by the British aviation advisor Skytrax in 2018, the HKIA ranked fourth in the annual evaluation of the World’s Best Airport, having lost its claim to the top spot in 2011 and never regained it. Singapore’s Changi Airport won the accolade for a sixth consecutive year, Seoul’s Incheon came in second, ahead of Tokyo’s Haneda.

The 2018 Skytrax rankings were based on votes from 13.73 million airline customers from over 100 countries, with 550 worldwide airports taking part. The survey evaluates areas and aspects from check-in, arrivals, transfers, shopping, security and immigration through to departures at the gate.

Explaining the decline of Hong Kong’s ranking, Lam Chiu-ying, the convenor of an aviation concern group People’s Aviation Watch, says he thinks having “insufficient aircraft parking spaces with aerobridge[s] connected to the terminal” and the “ambience of the terminals” are partly to blame.

Lam, who opposes the construction of a third runway at the airport because of the environmental impact and because he believes there will not be sufficient increased demand, adds the HKIA should focus on improving traveller’s experience. He suggests it could develop more efficient entry and departure processes, working towards fewer flight delays and improving airport ambience.

However, Stewart Chun Kin-ming, the acting general manager of SATS, a ground-handling company in Hong Kong, says what Hong Kong International Airport needs most to reclaim its former glory is for personnel in different sectors to work together. He says the biggest obstacle to this is the current labour shortage in the airport.

Chun says many of the jobs at the airport are hard and not all people can endure them, which makes it difficult to hire workers. He says the government should take responsibility for attracting more young people to work in the industry rather than just investing in a smart airport.

“At the moment, many jobs still require humans to do the work. Manpower is still important unless someone can invest hundreds of billions of dollars in job optimisation, which I cannot see in the short term,” he says.

Alan Li Wing-foo, the chairman of the Hong Kong Airport Ramp Services Employees Union elaborates on the reasons why it is hard to recruit and keep airport staff, such as baggage handlers. He says the hours are long, the work is physically arduous, there is a poor work environment and the location of work is geographically remote. He adds the return trip to and from work usually takes workers three hours.

Yet, with a third runway in the pipeline, the airport will require even more staff. With the Airport Authority Hong Kong (AAHK) saying the existing two-runway system is reaching maximum handling capacity, the government approved the Three-runway System project to meet a predicted growth in air traffic demand and boost Hong Kong’s competitiveness.

The project involves land reclamation and the building of a new passenger concourse and parking positions, a 3.8 kilometre-long runway and a new baggage handling system. The AAHK predicts the airport will be able to serve 100 million passengers and 600,000 flights annually by 2030 after the third runway is completed. The scale of the works is almost equivalent to building a whole new airport.

But Li is worried about where the workers will come from. “We now have around 73,000 people working in the HKIA. But according to the figures released by the government or AAHK, the airport needs to have 127,000 people working there after the project is completed,” Li says. This means the airport will need to find an extra 50,000 workers. “Where can we find these 50,000 people?” Li says.

The AAHK doest not share Li’s concerns. In a written reply to Varsity‘s questions, it says it has taken various measure to draw talent to work at the airport, such as improving working conditions, providing job security and reasonable salary packages and organising an annual Career Expo and job fairs to attract new talent.

For his part, Li, despite his worries about staff shortages thinks the completion of the third-runway system project could improve ground handling services because the current capacity of the airport facilities is saturated. The opening of Midfield Concourse (MFC) in 2015 with its extra aircraft parking stands only made matters worse.

The MFC serves around 10 million passengers a year, however, air travellers in the MFC share the 13 baggage carousels in the Baggage Reclaim Hall with other passengers in Terminal 1. Worse still, the delivery system in the MFC relies on trucks to carry the luggage back to Terminal 1, further adding to passengers’ waiting time and affecting the travelling experience.

Li says the existing 13 baggage carousels are overloaded and it is difficult for ground service workers to handle the hundreds of pieces of luggage from each flight promptly. “If the airport is fully occupied and aircraft land and park at the same time, what do you expect [ground service workers] to do when baggage from the hundreds of flights are loaded onto the 13 baggage carousels?” he says.

Besides falling behind on ground services, the technology and the quality of other international airports are also affecting Hong Kong’s standing. Legislative councillor and professional pilot Jeremy Tam Man-ho takes Singapore’s Changi Airport as an example. Construction of terminal four of Changi Airport was completed last year. Tam says there are many new features in the terminal which the HKIA can learn from, such as the automatic immigration clearance system. “It is like the Hong Kong e-channel services, but it applies to [nearly] all the passports,” Tam explains.

Tam points to the rest zones with comfortable sofas provided in Changi airport, which passengers waiting for delayed flights appreciate. “You can see in Hong Kong it’s another case, in which there are always delayed flights and people sleep everywhere. The chairs are not designed for resting,” he says.

However, aviation sector analyst Michael Hui Chun-wai of Flight Ascend Consultancy, has a different perspective on Hong Kong’s declining rank. He questions whether the HKIA should be chasing the top ranking.

Hui thinks Singapore’s Changi airport excels in baggage delivery services and customs entry but he casts doubt on whether reaching Changi’s level on these parameters is the most important hallmark of a successful airport. “I think Singapore [Changi] Airport is very nice, new and advanced. But is it necessary to make it  that fast-paced? Is it necessary to reach for that high efficiency?”

Hui says Hong Kong is actually doing a great job. “Actually if you observe the immigration process in Hong Kong, it is rather quick comparing to so many other countries. In Asia, it is possible that the [performance of] the HKIA is above average.”

Hui also believes the Skytrax ranking is not comprehensive enough to assess the overall performance of an airport because it only focuses on the experience of travellers. “I believe Skytrax is a quite a popular ranking but I think it might be one-sided. There are various aspects that need to be seen and addressed,” he says.

More importantly, Hui thinks Hong Kong should be realistic and strategic about its role as an aviation hub. “Most of the time, we don’t really need to use words [like] ‘we have to be the first’ or ‘we have to be the biggest airport’ as a benchmark because the market does not have the capability to achieve this,” explains Hui.

Hong Kong is still one of the busiest airports in the world. According to the AAHK, HKIA handled 72.9 million passengers in 2017 and is the world’s busiest airport for cargo. Together with airmail, cargo throughput at HKIA exceeded the 5 million tonne mark for the first time in 2017, making it the first airport in the world to have handled that amount in a single year.

Hui says this shows HKIA is still highly competitive among Asia’s international airports, however he adds its decline is inevitable. This has nothing to do with the airport itself but everything to do with market realities.

The Hong Kong International Airport used to be a major hub for goods and passengers travelling to and from mainland China. In particular, it was a transit point for travel across the Taiwan Strait before direct air links were established in 2005. From that year onwards, Beijing’s Capital Airport overtook HKIA in annual passenger traffic. Not only are there now more international connections to major mainland airports like Beijing, Shanghai Pudong and Guangzhou, but also to second-tier mainland cities. The development of high-speed rail services also adds to the competition.

“Therefore, I think the thing that the HKIA needs to improve is to adapt to the trend of market,” says Hui.

Lawmaker Jeremy Tam Man-ho agrees that consumer rankings are not the most important issue the HKIA has to be concerned with. “Ranking is important, but [more important] is strategic positioning. Hopefully, the HKIA can keep its status as the number one cargo airport in the world,” Tam says.