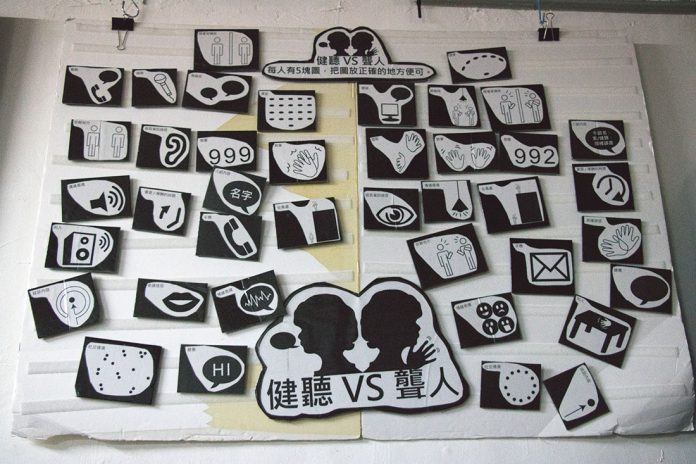 Will emphasis on speaking and hearing lead to demise of Sign Language in Hong Kong?

At the Sign Language Association’s office, Wang Kai-fung communicates with his Deaf colleagues using his hands and constantly changing facial expressions. But when he sits down to talk to Varsity, he speaks easily in fluent Cantonese.

Wang, the 52-year-old founder of the Sign Language Association recalls his experience of studying in a mainstream school as a Deaf child. He says Deaf students have to pay very close attention to the shape of the teacher’s mouth when they are speaking in order to guess the meaning of words and sentences.

“Basically, I kept considering words that might fit the shape of the teacher’s mouth. Most of the time, it took me a while to figure out the exact words,” says Wang. “Then, I had to track back and interpret the meaning of the sentence. My thinking [process] became more complex and it slowed down my learning.”

In fact, this is still the case for many students with hearing impairments today. In the 1960s, the government began to promote integrated education, with the aim of “educating handicapped children in the same way as ordinary children whenever possible”. In 1972, it began providing free hearing aids for hearing-impaired students. Since 1994, children with severe hearing impairment who find hearing aids unhelpful have been receiving cochlear implantations, a low-risk surgical procedure.

Cochlear implants help transmit weak electric currents to the brain so recipients can recognise sounds without audiphones. The government now sponsors 70 cochlear implantations every year, and most children are able to study in mainstream schools after the surgery.

As a result, the number of schools for the Deaf declined sharply from 13 at its peak in 1973 to just one today. One impact of these policies is that the number of people who use Sign Language has declined over the decades. A report published by the Census and Statistics Department in 2014 showed there were 155,200 people with hearing difficulties in Hong Kong, of which only 2.5 per cent knew how to use Sign Language.

“We adopt the Total Communication approach, which incorporates any modes of communication, be they graphics, videos, sound, mouthing, Sign Language or words,” says Hui. “We use anything that is fit for use.”

Hui says there are only 76 students across the primary and secondary sections of the school for the Deaf because the Education Bureau stipulates that only students with severe or profound hearing impairment can enter the school. However, his school has also been appointed to support other hearing impaired students in mainstream schools through the “Enhanced Support Service for Hearing Impaired Students Attending Ordinary Schools” (ESS) scheme supervised by the Education Bureau, which provides students with academic counselling and verbal communication training after school or on Saturdays.

Even with hearing aids and cochlear implants, hearing cannot be fully restored and language development is affected in children with hearing impairment. In the current academic year, 56 per cent of the students at Hui’s school have had cochlear implants but still have severe or profound hearing impairment. Hui hopes the Education Bureau can lower the admission requirements for entering the Deaf school so more students can get the support they need.

Despite the emphasis on teaching children with hearing impairments in mainstream schools using oral and written language with the assistance of electronic hearing devices, there is growing support for adopting a sign-oral language bilingual approach to help Deaf children maximise their language development potential. Experts agree that the early learning of Sign Language will not affect later acquisition of oral language as some had previously believed. In fact, it can enhance learning of oral and written language.

Natural Sign Language is similar to colloquial Cantonese – it expresses the meaning of the conversation directly, while the signed Chinese corresponds to the sentence structure in Cantonese, so signs are used to indicate word order.

Hui says it is possible to use natural Sign Language when he is doing Sign Language interpretation in school talks, but not in class. As teachers need to talk and sign at the same time, they revert to signed Chinese because it fits the spoken sentence structure.

Outside the classroom setting, however, signed Chinese can be regarded as too difficult to understand. Sisters Don Leung Ling-sum, 36, and Leung Pui-yan, 24, were raised by Deaf parents. Pui-yan says signed Chinese is “stiffer” because it represents each and every word in a sentence. She says Deaf people understand natural Sign Language better as it uses visual concepts instead.

Pui-yan illustrates this by citing a common Chinese idiom – “people mountain people sea” – which means there are a lot of people at a place. Leung says rather than signing four separate Chinese characters, the Deaf will understand the phrase better if it is expressed by showing many people rushing to the scene in natural Sign Language.

However, Don says she does not understand half of the content as the interpreters translate whole paragraphs word by word, rather than convey the meaning directly in natural Sign Language. Pui-yan adds that it is hard to do simultaneous Sign Language interpretation for Legislative Council meetings because the vocabulary used is very advanced and interpreters cannot prepare for them.

“It’s best if interpreters can prepare beforehand so that they have something in mind and know briefly what to sign,” says Leung. “If it is simultaneous and live-recorded, interpreters might not be able to understand it right away and get stuck.”

In addition to introducing Sign Language interpretation in the Legislative Council, the Rehabilitation Advisory Committee under the Labour and Welfare Bureau set up a working group in 2009 to promote the use of Sign Language. The Labour and Welfare Bureau said in a written reply to Varsity that the objective of the government’s rehabilitation policy is to create a barrier-free environment and facilitate the integration of persons with disabilities into the community.

However, a motion moved by lawmaker Leung Yiu-chung to make Sign Language an official language of Hong Kong was voted down in the Legislative Council in early 2017. More than half of the members from the functional constituencies abstained, with members from the pro-establishment camp saying this was because Sign Language use is uncommon and not unified in Hong Kong.

Cindy Chan is the founder and chairman of Children of Deaf Adults (CODA) Hong Kong. CODA Hong Kong is working closely with other NGOs and lawmaker Leung to fight for Sign Language to be adopted as an official language in Hong Kong.

Chan sees an increasing trend of Sign Language usage among the general public and believes Sign Language will receive a higher status and priority in society if it is officially recognised. It would mean the government would better cater to the Deaf community’s needs in terms of education and interpretation services in public organisations like hospitals and police stations, says Chan.

Chan adds that most Deaf people are unaware of their rights to request translation services in hospitals and police stations. As things stand, So Kim-wan, a 31-year-old Sign Language tutor at CODA Hong Kong, says Sign Language interpreters have dim career prospects because there is a very limited quota for Sign Language interpreters provided by the government or NGOs. So says this contributes to the phenomenon of most Sign Language courses being extra-curricular activities, instead of professional and systematic teaching.

“Even when you are recognised as a professional [interpreter], the problem is that Hong Kong does not provide the way out for you,” says So. “You have to maintain a basic living, but when this is so difficult to achieve, how can you ask people to devote themselves to do Sign Language interpretation?”

So thinks the government is making some progress in promoting Sign Language, but that Hong Kong still lags behind other cities like Macau where support for the Deaf community was identified in the Ten-year Development Plan for Rehabilitation Services 2016-2025. Measures taken there include training frontline public sector workers in Sign Language and subsidising training for Sign Language interpreters.

Here in Hong Kong, So says misunderstandings still abound about the Deaf. For example, So says the term “deaf-mute”, which the media and the government commonly uses when referring to the Deaf community, has always been inaccurate.

“They are not deaf-mute because their vocal cords are normal. They can speak,” says So. “The term [deaf-mute] is actually a bit insulting to them, but society remains unchanged.”

To eradicate such misconceptions about the Deaf community, So thinks the government should include fundamental concepts about the Deaf in primary and secondary school education. He says students will not have any idea about the Deaf, unless schools arrange voluntary services for them to come into contact with the Deaf.

“Just basic knowledge about Deaf people would be enough, because that is what people don’t have,” says So. “Let’s take the first step.”