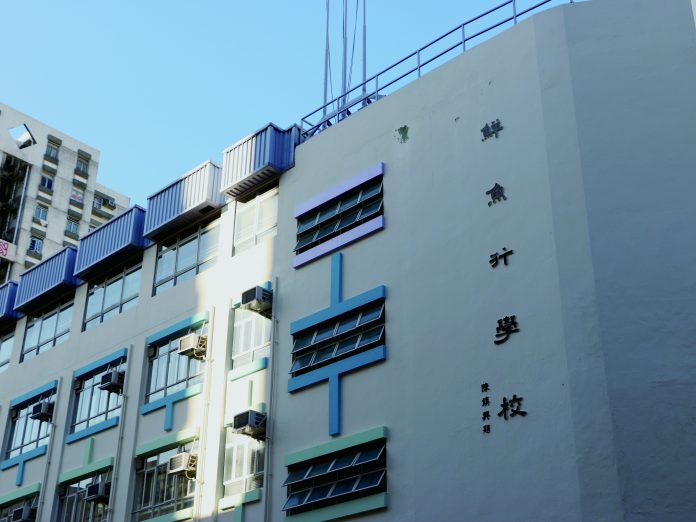 He bemoans the deep differences between government schools and those on the Direct Subsidy Scheme (DSS) and the effect on students.

For Leung, the division between rich and poor students is not just heartfelt – it needs to make headlines. And, back in 2002 he did just that.

That year he left his school development officer job in the Education and Manpower Bureau to take over the closure-threatened Fresh Fish Traders’ School in Tai Kok Tsui, Kowloon. Then the battle for the school for mainly grassroots students really commenced. Leung fought long and hard and won. He remained as the school’s principal until his retirement in 2015.

Now, however, he is thinking of one student in particular who won a place at a DSS school.“Yeung Man was a top student and I recommended her to get into Heep Yunn School in 2013. But I learnt that she dropped out of school last year, as she could not manage her studies while having a part-time job to cover the tuition fees,” Leung says.

“This is very unfortunate,” he adds. “Our school can help students to get good results with the aid of donations, but once they get into secondary school, there are no more resources that can help them. I have tried to contact her, but she did not pick up my call.”

The DSS was introduced in 1991 to inject diversity into the local education system by giving some schools autonomy in management and some independence in setting fees and curriculums. DSS schools receive a government subsidy for each student who is enrolled but are still allowed to collect fees.

Heep Yunn School’s annual school fee for each student, for instance, is HK$33,000 while at St. Paul’s Co-educational College, the fee is HK$61,000 for secondary school classes, and HK$91,500 for International Baccalaureate Diploma Programme (IBDP) classes. These schools, therefore, have more resources to provide additional support services and facilities, such as building swimming pools and offering exchange opportunities.

Students who studied at DSS schools believe their school brought them more opportunities and exposure. Yam Wai-shan, a graduate of St. Paul’s Co-educational College, says: “My school arranges a four-week summer exchange programme to Australia for third-year students every year…and it is partially funded by the school.” Wong Yui-hang, a graduate of Heung To Secondary School (Tseung Kwan O) says the school has “a lot of co-curricular activities…they always hire the top tutors from the sports field.”

In recent years, many top government-funded schools have made the switch to DSS. There are now 60 DSS secondary schools across the city and the change has sparked speculation that these prestigious schools made the move in a bid to maintain their social status in society.

“When DSS was introduced in the late 90s, not only Hong Kong but the whole world was talking about the new public management model which is bringing the mode of private business into education to enhance the efficiency of the sector. Senior government officials and education elites thought this could improve the functionality of education,” says Hayes Tang Hei-hang, assistant professor in the Department of Education Policy and Leadership at the Education University.

Retired school principal Leung believes many schools switch to DSS because they want to have automony in student admissions. “Due to the decreasing population in Hong Kong, the number of students become fewer. Schools want to adopt DSS to maintain their own reputation hence they eliminate less wealthy students who are randomly sent by the government’s Secondary School Places Allocation,” he says.

Students also observe inequalities between aided schools and DSS schools. Lam Ho-yi, a graduate of Po Leung Kuk Laws Foundation College, a DSS school, recalls: “I had experience of the dissection of a mouse, ox eye and pig lung. But I found that my friend who studied in a government-aided school never had dissection at school. This made me realise that our school did really have more resources.”

Grassroots students who cannot afford the school fees of DSS schools can only go to government-aided or government-funded schools. Grassroots students admitted into the traditional, more prestigious schools still have a chance to move up the social ladder but Leung warns that once all those schools turn into DSS schools, they will lose that chance completely.

“Take say Maryknoll Convent School, a government aided-school; I can still be admitted if I study in a primary school somewhere else. But if I apply for St Paul’s Co-educational college, which is a DSS school and most of the student quota is taken up by their affiliated primary school, I couldn’t get in as the places left in the quota are only for people who are wealthy enough.”

This puts students from grassroots families at a disadvantage as they cannot afford the school fees. Even though DSS schools give out scholarships and financial schemes, poorer students are less likely to apply. Leung says: “To apply for financial help, you have to prove your family is from the low income category but then you would not pass the interview in the first place if you come from a low income family.”

Despite the growing polarisation, there are still groups who stand against turning prestigious government-funded schools into DSS establishments. In 2013, groups of former pupils and parents at St Stephen’s Girls’ School successfully fought against the school board applying to become a DSS school.

They are, however, a rarity and meanwhile bright students from less wealthy families will be screened out by DSS schools at the interview stage, according to Leung. “When a teacher is choosing students, they will accept you if you live in Laguna City [a private housing estate]. You will be rejected if you live in Lam Tin Estate [a public housing estate],” he says. This means DSS schools are favoured by the middle-class families.

The DSS Council was unavailable for comment about Leung’s claim at the time of going to press.

Some DSS schools adopt the International Baccalaureate (IB) programme instead of Hong Kong’s Diploma of Secondary Education (DSE) – the public examination students take in the final year of secondary school. Since the government recognises the IB certificate, students can choose to take HKDSE exams or the IB programme. The fee for the IB programme, however, is not included in the tuition fee. Students who are taking IB have to pay an additional fee of around HK$30,000.

Leung notes: “Students choose IB over DSE because DSE is harder. Yet, students from government-aided school don’t have a choice but only taking the DSE exam…Only DSS students get to study the IB programme and the ratio of the university intakes of students from IB, GSCE, Non-JUPAS is higher.”

Eventually, fewer poor people will have the chance to study in these elite schools which will affect their access to tertiary education and hinder Hong Kong’s social mobility. “Social mobility in Hong Kong has a trend of polarisation. We have mobility, but it all depends on your class background,” says Professor Wong Yi-lee, assistant professor in the Faculty of Education at the Chinese University of Hong Kong. “If you come from a wealthy family, you can go up; otherwise, you fall deep down.” She points out that the education system has lost its function as a social mobility mechanism to improve people’s living standard.

Wong adds that it is understandable that successful government-aided schools prefer switching to DSS so that they can enjoy autonomy in student selection. “As a school principal, he or she must be thinking of the interests of his or her own school and wants to maintain the quality of the school by admitting quality students.”

She adds: “Parents have different strategies to try to bypass this competitive route in order to send their children to university in every generation. And this time it is the IB programme. Since you don’t have to send your kids overseas, and why not take the IB? This creates inequality relating to the wealthiness of families.”

Wong believes random allocation is the most suitable method to rectify the situation. “Previously, when we allocated students for basic education with random allocation, we were able to admit students from all levels,” she says, “Random selection is better if you believe teaching is better when there is a group of people with mixed ability and background, which means you have all kinds of students in a class. Students actually can learn better from each other, like they get to know students with different background in a class.”