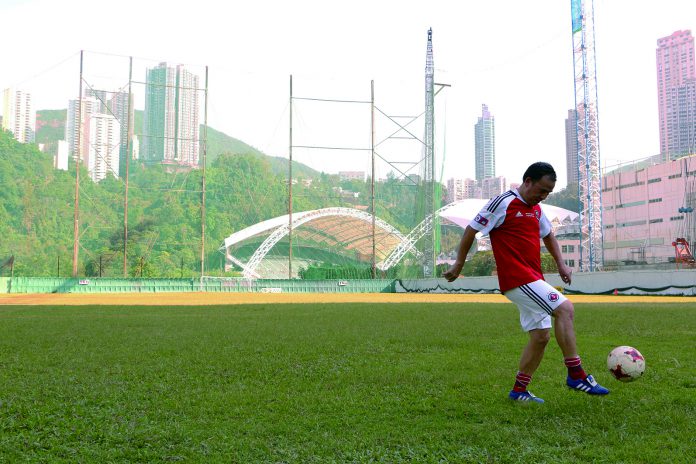 At first glance, the array of football match photos and club pennants that cover the walls makes you wonder whether this is really a traditional Chinese tie da (bone-setting) clinic. But then Jacky Pang Kam-chuen, owner of the clinic, is no ordinary traditional Chinese physician — he was also a renowned football player in the 1980s.

Pang works in his small clinic in Tai Po from Monday to Saturday, treating patients with sports injuries, his specialty, and residents nearby. On Sundays, the 56-year-old dons his bright red No.2 jersey, runs onto the football pitch and plays friendly matches with his old teammates from the South China Football Team.

Pang resolved to become a professional football player in his childhood. Back in the 1970s, there were very few leisure activities for kids so he used to play football on the streets every day after school. That was the start of his strong interest in football. “My dream was an ordinary one which was shared by many children [at that time],” Pang says.

“My dream was an ordinary one which was shared by many children [at that time].”

Unlike his peers, Pang held on to his football dream and made it come true with talent and effort. He honed his football skills through playing on the streets for years and joining the football team in his secondary school. His flair was soon discovered by one of his teachers who was a retired football player.

Thanks to his teacher’s recommendation, Pang then joined the youth training programme affiliated to the South China Football Team. South China is regarded as one of the most popular football clubs in Hong Kong, winning multiple champions in local league competitions.

Balancing a career and family expectations is not easy. Pang’s family did not support him pursuing a career as a full-time football player at first. Fortunately, his family ran a siu mei (charcoal-grilled barbecue meat) shop, so he did not have much of an economic burden to bear. He told his parents at that time: “Give me two to three years’ time; if I don’t succeed, I will come back home [and help with the family business].”

Dubbed “Shaolin Temple”, South China Football Team has been home to many talented football players. For Pang, life in South China’s youth football team was hectic. Trainees had to follow strict routines and undergo four hours of training every day. “It was tough, but to be able to do what I like, I had no choice,” he says.

Money was also a problem — as apprentices received little remuneration, he had to earn pocket money by helping out at his family’s siu mei shop. That is how he earned his nickname, Siu Lap Chuen.

Two years later, Pang officially became a professional football player at South China Football Team, serving as a right back. He was very successful throughout his 10-year career and in 1991 and 1992 he was selected to be one of the “Hong Kong League XI” who play for the Lunar New Year Cup, an annual football event held by the Hong Kong Football Association. The League XI is selected from the Hong Kong First Division League.

An encounter with South China’s team doctor, Yau Wing-ching, a Chinese tie da specialist led Pang to take a different path. The countless matches and ongoing training made injuries inevitable for professional football players like Pang. As he preferred Chinese medical therapies with herbal treatments for his wounds, he often visited Yau’s clinic for check-ups. Over time, he developed an interest in Chinese medicine. “This job allows me to help people while earning a stable income [after retirement from his football career]. Plus it’s not a routine nine-to-five office job,” he says.

He later started to help out voluntarily at Yau’s clinic, spending hours there after finishing football practice. Through observation and hands-on experience, he learnt many useful skills which came in handy at his future Chinese medicine practice.

Pang declined contract renewal with South China in 1992 at the peak of his football career, fearing Hong Kong’s political environment after the handover. He and his wife decided to migrate to Toronto, Canada a year later where he got a job in a cha chaan teng (local Hong Kong-style restaurant) and worked as a part-time football commentator at a local Cantonese radio station.

During his days in Canada, he never forgot his passion for Chinese medicine. He started a tie da clinic in the basement of his home, serving patients living nearby — and putting his Chinese medicine knowledge into practice for the first time.

In 1998, Pang and his wife returned to Hong Kong where he soon got a job at his former master Yau’s Chinese medicine clinic. After working there as an apprentice for a few years, he began to think about starting his own clinic.

To prepare for this, he had to attain a professional qualification — which was not easy. The problem was that he had only started learning Chinese medicine in his mid-20s and he did not have sufficient knowledge of the essential foundation of the profession. To make up for it, he studied whenever there was no patient in the clinic. “Apart from reading books, I met different patients every day. These clinical experiences were definitely more helpful than simply learning from the books,” he says. He eventually passed the professional test on his third attempt.

In 2001, Pang finally opened his tie da clinic in Tai Po, a district he is familiar with. “At least I know more about this place [Tai Po], the residents, the neighbourhood. I have many friends and old teammates here,” he explains.

He started his practice in a small space of around 120 sq ft located in a local shopping centre— which cost him around HK$30,000 and managed to break even in a few months. The fame from his glory days as a football player certainly helped, as even patients from other districts came after hearing the news.

Specialising in treating sports injuries, including bruises and sprains, he was able to use his own experience as a former athlete to explain to patients their conditions in great detail. He also gave residents in the district a special discount. Over the years, he has won a fine reputation and attracted a group of loyal patients.

“You have to take care of your patients wholeheartedly, in every possible way, especially if you are a medical practitioner,” Pang says. “I treat all my patients the same. Although I can’t guarantee that I can cure all of them, I treat them equally and try my best.”

“You have to take care of your patients wholeheartedly, in every possible way, especially if you are a medical practitioner.”

If cases are too complicated to cure with tie da, such as bone fractures, Pang refers them to hospitals for further treatment. “I don’t have advanced equipment here [in my clinic], so I ask them to go to hospitals for check-ups. This is what a responsible medical practitioner should do,” he says. “I don’t think I should prevent patients from getting proper medical treatment.”

He is a successful tie da physician now but Pang still remains humble. He questions himself all the time: “Why doesn’t [the patient] come back? Did I use the wrong medicine on him?” This helps him treat patients more effectively. “Chinese medicine is very complicated. I’ m still learning by doing,” he says.

Pang’s diligent attitude is perhaps what helped him advance in both careers. Now he devotes himself to tie da but football will always remain special to him. He says Sunday is the most anticipated day of the week because he can return to South China Football Team’s pitch and play with fellow veterans. “Even in my eighties, if I could still stand in the field and play football, I would be satisfied,” he says.