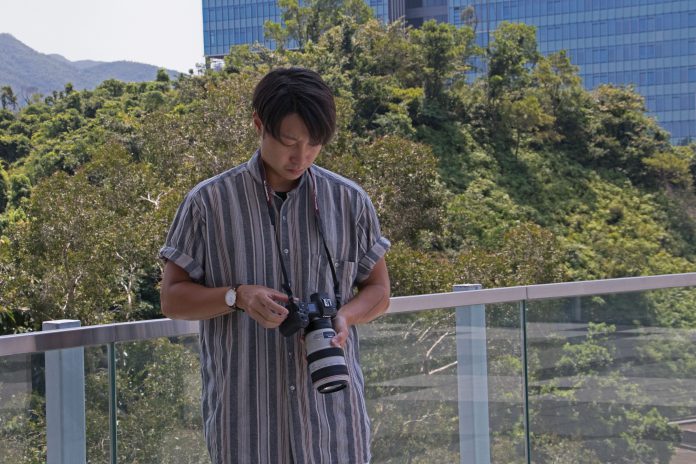 “During this social movement, I witnessed unrighteousness. I think it is my mission to capture these moments with my camera,” Dicky Ma says. Born in Hong Kong, Ma is also known as Dicky Manana, is a renowned freelance commercial photographer specialised in portraits. His works include but not limited to photo shooting for different apparel brands, such as Adidas, Timberland and Bread n Butter.

Rather than receiving a formal photography education, studying Fine Arts in Beijing inspires Ma to be a photographer. But his job achievements do not satisfy him. The recent anti-extradition bill movement triggers him to use photo-taking as a medium to be an eye for the public.

Ma recalls giving stranded young demonstrators a ride from Tsuen Wan to their homes. “Money was found under a mat (after they got off the car). Mostly were coins, such as $1 coins, $2 coins or $5 coins and even a $20 note. I was heartbroken,” Ma says. He jokes when he was the same age as the young demonstrators, he only played with ponytails of his classmates. To Ma it is inconceivable what these young demonstrators are experiencing now.

Most of the time, the atmosphere in the frontline is very intense and dangerous. Unlike his commercial photo shooting, Ma can only press the shutter button without thinking. He recalls when he was taking a photo of police officers shooting rubber bullets, a protester who protected him with an umbrella casually asked him about the model of his camera. It is surreal to Ma.

“I don’t contribute a lot to this social movement. From my perspective, I only made use of my identity and ability to do something right,” Ma exclaims. He does not care about people criticising him taking these photos for money because he does not get paid from anyone. And he thinks he does not deserve respect from his supporters because he wants to dedicate it to the frontline demonstrators.

From an Artist to a Photographer

Ma has started drawing since high school. He then studied painting and illustration at The Central Academy of Fine Arts (CAFA) in Beijing. Ma describes it as a life changing experience that has navigated him to his career. He appreciates the teaching method in Beijing that did not only focus on drawing skills but more essentially about human qualities. “They teach you how to cultivate yourself to draw a good piece of artwork through learning history, humanities, and cultures,” Ma adds.

Back in the era when technologies were not as advanced as today, Ma could only share his life in Beijing by emailing photos to his family. He enjoyed taking snapshots when doing outdoor sketching. This was when he realised photo-taking was a more direct and faster way to convey messages and his thoughts compared to drawing.

After graduating from the CAFA, Ma worked in New York as a photographer. He says working in New York is not as glamorous as how it is portrayed in TV drama. The working environment in the US is more relaxing, and job nature is similar to Hong Kong but is even more competitive. Besides, discrimination against Chinese is another issue Ma faces there.

The authenticity of a Photo

The art skill gained from drawing portraits strengthens Ma’s foundation of taking a powerful portrait photo. He is sensitive to light and knows how to highlight facial features. Even though he has learned photo editing from YouTube, he hates relying too much on image-editing which he thinks would weaken a photo’s authenticity. Apart from commercial photo, he does not edit photos shot for personal interest.

Ma likes interacting with strangers and is interested in their stories. Every time before he takes a portrait photo, he chats with the model and introduces himself professionally. He says when models become comfortable being with him, their facial expression will be more relaxed.

He thinks the hardest task as a photographer is not about how to take a decent photo but how to compromise between his judgment and comments from clients. Instead of blindly following orders, he still expresses his disagreement when he encounters inappropriate comments.

Remain True to the Original Aspiration

Ma sees no difference in viewing the world with his eyes or his camera. Whenever he looks at a photo, he can reminisce the moment he captured the image. Being a photographer in this social movement, he feels going back to the early stage when he first had an interest in photography. “It is just like when I first arrived in Beijing, I brought along a camera to take street photos. It is very similar to the situation now. And I realise I love taking this kind of photos,” Ma says.

While commercial photos limit Ma’s creativity, taking photos in demonstrations allows him to take full control of images. This inspired him to create an online photo gallery in October. It features dozens of people who played different roles including frontlines, journalists, protesters, and so on during the social movement. He hopes to deliver the message that people from different sectors have fought along with the youth.