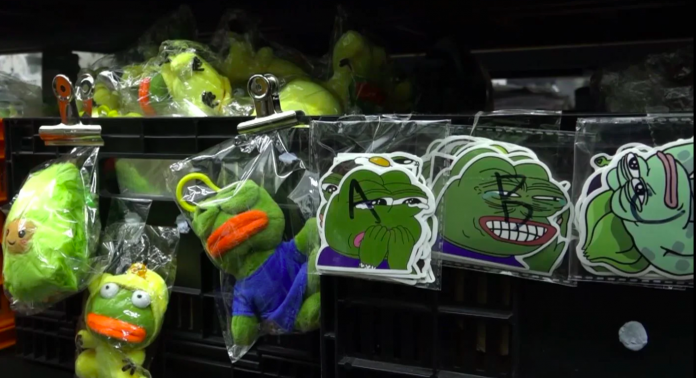 It is fun to convert feelings and opinions into emojis, GIFs, memes, stickers. Internet meme Pepe the Frog originated in the USA as a symbol of hate has taken the stage as a prominent figure in the anti-extradition bill movement as a symbol of love and support.

Associate professor Katrien Jacobs of Cultural Studies at the Chinese University of Hong Kong says people spend more time chatting with friends via social media platforms. They do not like reading long texts and are more infatuated with visual imagery. People who made the stickers distribute them for free, inviting others to adopt them on various platforms. These social norms give rise to such a new communication trend.

The practice of storing and creating stickers of cartoon characters and human reactions for the purpose of communication is prevalent among Hong Kongers. One of them them, Pepe the Frog, is used as a means to convey political messages. The character has gained widespread attention in anti-extradition bill protests. The cartoon character is portrayed as a symbol of democracy, love, freedom by the people in Hong Kong, which is different from “hate speech” conferred by people in the United States. Starting from an innocent figure in the US, it was used by radical groups to hate minorities.

Pepe has been carried around by many Hong Kongers during protests, activities to show support, encouragement, and solidarity for each other in the fight for democracy and freedom. Mandy, a participant of the Pepe human chain, has changed her view of Pepe in light of the recent protests. She first found the frog ugly, but now she finds it to be more adorable after being used as a symbol in a more positive light in the recent anti-government movement.

Jumping on the Pepe bandwagon, businessmen commercialize Pepe by selling products featuring the cartoon frog, such as toys, backpacks, wallets, and so forth. Sam, owner of Accstore, an online store that sells mainly sports-related products, has included Pepe products into their sales item list since the start of 2019, long before the anti-extradition bill movement started in June. He says the facial expression of Pepe reflects the frustration of Hong Kong people when the government keeps turning a deaf ear to their demands.