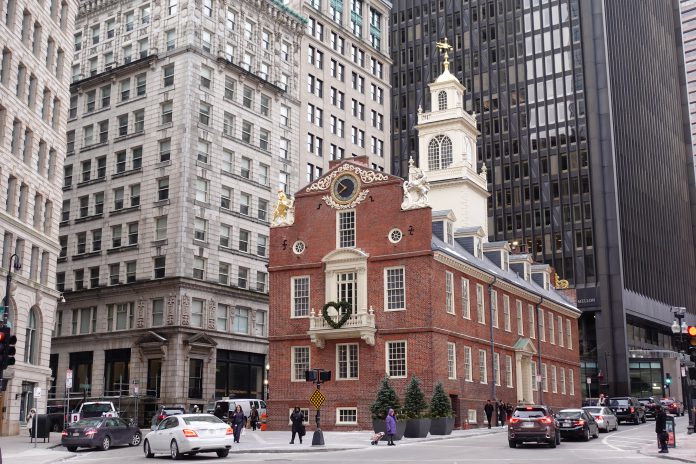 Walking along the Freedom Trail is like revisiting the history of American revolution.

By Tommy Huang in Boston

Boston was regarded as the birthplace of the American Revolution. Now a popular tourist attraction there, the Freedom Trail, is a 4 km red brick pedestrian walk starting from Boston Common to Bunker Hill, with 16 historical sites in American history.

Two important sites on the Freedom Trail are Faneuil Hall and Old South Meeting House. Boston revoluntionists gathered in these meeting halls as they challenged the British Parliament and demanded their rights during the Boston Tea Party, a mercantile and political protest which is usually considered to be the catalyst to the American Revolution.

Several weeks of town meetings discussing tea boycott were held upon the arrival of the British East India Company’s ships and the situation reached its climax on December 16, 1773, when demonstrators marched to Griffin’s Wharf to board on those ships to dump 340 tea chests into the Boston port.

“As a major commercial port among the 13 Colonies, Boston was seriously affected in terms of trade when the British levied taxes on colonies,” says Lian Yi-Zheng, an economic professor says. “So anti-taxation campaigns occurred in Boston,” Lian, who had his tertiary education in the US and taught at the University of California, adds.

The British government was angered by the the Boston Tea Party. In 1774 the British enacted the Intolerable Acts, a series of punitive laws, that the Boston port was closed until American paid for the dumped tea and restored British authority in the Province of Massachusetts Bay.

Lian says Boston had a highly independent colonial governmen under British rule, like Hong Kong before the 1997 handover from British to Chinese sovereignty.

Lian points out many Americans liken today’s Hong Kong to the US during the American Revolution. “In order to pursue freedom and escape from oppression, people left the motherland and established a highly civilized place economically and politically. In the end, the oppression of the government of motherland led to resistance,” Lian says.

“This mechanism is very similar with what the USA had gone through. In comparison with their own history, what happened in Hong Kong in 2019 consciously or subconsciously resonates Americans.”