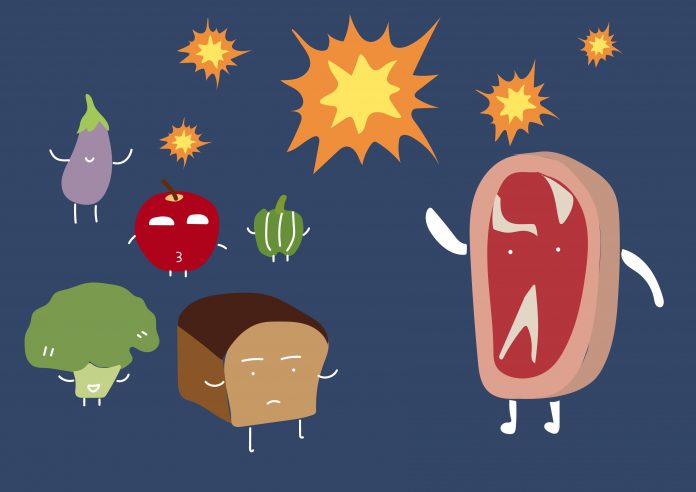 Melanie Joy, 54, used to eat meat. She had an epiphany in 1989 which changed her diet completely.

“One day, I ate a hamburger that was contaminated with Campylobacter and ended up in hospital on intravenous antibiotics. After that experience, I just became disgusted by meat,” Joy recalls.

Campylobacter is one of the four major global causes of diarrhoeal diseases. It is considered to be the most common bacterial cause of human gastroenteritis in the world, according to the research of the World Health Organization.

The incident also made Joy wonder why she patted her dog and ate  chicken which might be as intelligent as the former.

The experience made Joy become a vegetarian and inspired her to discover more about animal agriculture and meat-eating culture in her doctoral paper in Havard.

Joy named the choice of eating animals and eating only certain kind of animals as “carnism” in 2001.

Despite growing awareness towards carnism and veganism in recent years, Joy sees the lack of awareness-raising actions from vegan advocates. The animal activist founded Beyond Carnism in 2010 to promote the concepts.

“What we want to do is to reduce the resistance that people feel of becoming vegan, or moving towards veganism, and direct them to organisations and groups that can give them practical tools for dietary and lifestyle change”, Joy explains.

She believes that a meaningful social change requires a two-pronged approach: weakening carnism and strengthening veganism. “Our two-pronged approach includes awareness-raising so we raise awareness of carnism among the public and act among non-vegans primarily,” says the founder, who has now been to 50 countries and has given her carnism presentation on six continents.

Apart from creating video and giving talks about carnism, Joy also plans a campaign for the release of the 10th edition of her award-winning book Why We Love Dogs, Eat Pigs and Wear Cows: An Introduction to Carnism, with the new foreword by Yuval Harari, an Israeli best-selling author.

“We try to strengthen veganism through the programme called ‘The Center for Effective Vegan Advocacy’”, says Joy, “And we train vegan advocates around the world in how to think and communicate about veganism to increase the chances of they will be effective in their own outreach.”

The Centre for Effective Vegan Advocacy aims to increase the impact of vegan advocacy around the world by providing on-site training, organizational consultation and grants to qualifying organisations and a strategy resource centre. Joy also mentions the programme is developing an online training.

For people who are not ready to fully commit to a new lifestyle, Joy encourages them to “be as vegan as possible”.

“By crowding out animal food or carnistic food, what (should) you do is just (to) add more and more plants in your diet, so there’s less space for the animals’ food,” says Joy.

Sharing Joy’s veiw, Dr Fiona Woodhouse, the Deputy Director (welfare) from the Society of Prevention of Cruelty to Animals (SPCA) in Hong Kong, has similar suggestions for people who are willing to go the extra mile for animals’ welfare.

The organisation believes that animals are sentient beings and they must at the very least be protected from all kinds of unnecessary torments. Yet, Woodhouse points out that it is “very difficult to kill an animal without causing some degree of suffering.”

An example would be poultry. Woodhouse says that from breeding and living condition of both meat birds and laying birds, to the ways of killing them involve a certain degree of suffering. In Hong Kong, the tradition of wet markets and live poultry trade creates an even more unpleasant environment for chickens.

Woodhouse believes veganism or vegetarianism is an option. “And it doesn’t have to be a strict conversion, it could be a reduction in the amount,” she says.

Founded in 2012 in Hong Kong, Green Monday advocates plant-based living and supports the global shift to a more sustainable food system. With the mission to make sustainable living “simple, viral and actionable” for all, Green Monday is inspiring the public to go plant-based once per week as an effective way to create positive changes in the world.

The green group has also opened Green Common, a one-stop plant-based concept store that merges a plant-based supermarket and restaurant into one. The group has developed a food-tech company, Right Treat, which invented an innovative pork alternative, OmniPork.

OmniPork is a proprietary blend of plant-based protein from peas, non-GMO soy, shiitake mushroom and rice. It was introduced in April 2018. This “all-purpose plant-based pork analogue” contains lower saturated fat and calories than real pork while offering more fibre, calcium and iron.

“It is also cholesterol-free, antibiotic-free, hormone-free, cruelty-free, and 71% lower in saturated fat and 62% lower in calories than real pork, while offering much higher fibre, 233% higher in calcium and 53% higher in iron,” says Cheung.

Cheung says the popularity of plant-based eating is rising dramatically since then: “Flexitarian population has skyrocketed from 5% before Green Monday was established to now 34% of the Hong Kong population, with people practicing one or multiple days of plant-based diet.”

Many people around the world are also making efforts to reduce meat consumption by choosing a more sustainable diet. Lim LiYing, a freelance writer and the founder of a wellness business, When Still Waters Speak, has been a vegan for more than seven years.

Instead of being a preachy vegan, she respects all manners of eating and lifestyles. “I believe in leading by example and I am glad to share that my family has gone a lot greener since then, and my dad has gone vegan too. Some of my friends are now also following suit,” she says.

Lim embarked on her vegan journey because she was once diagnosed with an eating disorder. In search of a suitable treatment, she found eating green is the best way to make peace with her plate.

The new diet and lifestyle have also given her a good thought on what it meant to be eating. “Eating is so much more than just putting food into our bodies,” says Lim. “I also studied what meat consumption is doing to the planet and I am very sure I will never turn away from the vegan way of life.”