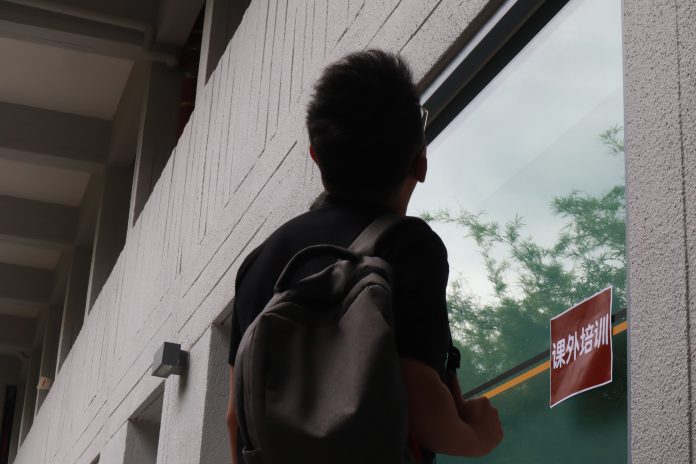 The Chinese government has introduced new regulations to cut down tutoring hours, leading to unemployment and forcing companies to restructure their business models.

Zhang Lihui started his private tutoring agency in August 2018 after working as a private tutor for three years. But his business has been badly affected by a government policy introduced in July.

“I used to have 400 people working for me, and now I have to cut 20 per cent of them. Half of my students left, and I have to refund all the fees to parents, which puts me under financial pressure,” the 38-year-old private tutoring agency founder says.

Zhang’s agency has six branches offering courses that cover all subjects taught in primary and middle schools such as Mathematics, English, Physics, Chemistry and so on during weekdays, weekends, and holidays.

His business has been severely hit since the Chinese government rolled out a set of measures known as the “double reduction”, which aimed at reducing homework and restricting off-campus tutoring for students from kindergarten to 12th grade or K-12 in July.

One of the policy measures bans private tutoring agencies to offer after-school classes on weekends, holidays, summer, and winter breaks. Tutoring is only allowed on weekdays with a limited number of hours.

A government guide was also issued to regulate tuition fees of courses for students undergoing compulsory education in China.

Zhang says the policy is killing their business. “It is impossible to operate if we follow the official guide on tuition fee charges. We cannot make any profit,” he says.

“When I first started the business 13 years ago, there were no regulations or government restrictions,” Zhang says. “Parents and schools wanted us to help their children and students to get into prestigious schools,” he adds.

“Even big companies like New Oriental Education & Technology Group (Xindongfang) cannot escape. They stopped offering online classes in August immediately. Many teachers have lost their jobs, and no help is offered to them,” Zhang says.

Zhu Yu, vice-president and chief executive officer of Oriental Youbo (New Oriental’s online K-12 course project), posted a message on WeChat in September saying that the company was financially healthy. Oriental Youbo promised to refund all tuition fees to students and compensated its employees. “After finishing all these, I think I will go to teach in rural villages for a year or two,” Zhu said in the post.

New Oriental Education & Technology Group Inc(Xindongfang) is the largest player in the private tutoring market in China. The company had 1,600 branches and over two million students all over the country, according to its third-quarter financial report in the 2021 fiscal year. It mainly offered courses related to the Test of English as a Foreign Language (TOEFL) and for K-12 students.

Zhang says he will change his business model. “We can run calligraphy classes or Lego playgroups since those are not related to the compulsory education,” he explains.

“As long as the demand exists, there is always a way out. The requirement of elite school admission is getting higher,” Zhang says.

Private tutors are also badly affected by the policy. However, it is hard for the government to monitor individual tutoring. Some private tutors continue to coach students, although they will be punished by the Ministry of Education of the People’s Republic of China if someone reported them.

Liu Guodong, 28, has been working in the education industry as a private tutor for four years. He has become underemployed due to the “double reduction” policy.

“I used to teach 40 hours per week. But now I can only teach three hours a week. And I am doing it illegally. I must sneak into students’ homes on weekends. I dare not to tell anyone about this,” he says.

The computer science major graduate is now teaching one on one lessons with middle school students in Foshan, a city in Guangdong province.

Liu’s income dropped by 80 per cent after the government introduced the new policy to crack down on private tutoring. He cannot afford to pay his mortgage due to the massive pay cut.

“My friends who worked as private tutors lost their jobs as well. It’s the policy from the ‘top’ (government), we have no say,” he adds.

“I am doing it illegally. I must sneak into students’ homes on weekends. I dare not to tell anyone about this.”

Edward Vickers, professor of the Department of Education at Kyushu University believes that the “double reduction” policy will not tackle root problems.

“Tutoring may happen in people’s homes and can be paid in cash. The government won’t be able to track these consumptions. The mom might quit her job to coach their children at home. That will bring even more financial pressure on this family,” Vickers explains.

“The Chinese government is only dealing with the symptom but not the causes. The main reason for the problem is a sense of insecurity. The number of well-paid jobs is limited in the Chinese economy. People are getting so desperate hence they rely on their child to go to a good university to find a good job,” Vickers adds.

“The Chinese government is only dealing with the symptom but not the causes. The main reason for the problem is a sense of insecurity.”

He believes that the “double reduction” policy will also have a negative impact on the economy in general, especially for foreign investors.

“It is also a signal for investors. Now everyone wants to pull out. Just like the ‘double reduction’ policy…it happened overnight without any signs. Investing in China will face some kinds of risks because certain industries can be suddenly cracked down,” Vickers says.