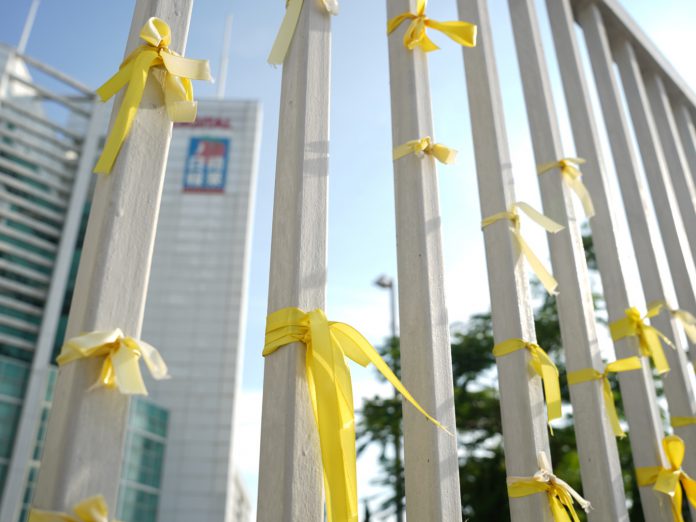 Ingrid Tse Hing-yee worked for three media outlets in three years. She joined Apple Daily in 2021 after resigning from i-Cable in 2019 due to arguments about editorial decisions. The 25-year-old journalist now works in online media Hong Kong Citizen News after Apple Daily was folded in June this year.

“I think I am doing the right thing, and I will continue to do so… I am determined to stay in the industry as long as I can,” she vows.

During Tse’s job interview with Apple Daily in January 2021, her employer warned her that she might not be able to work in the company for long. But she still took the job offer.

“Apple Daily reporters could still do reporting freely and did not do news stories to please the government at that time. There was still room to practise journalism,” Tse says.

The Tearing Down of Apple Daily

On June 17, 2021, hundreds of police officers raided the office a second time and arrested five executives on suspicion of “colluding with a foreign country or with external elements”, violating the national security law. Assets worth HK$18 million were frozen on the same day. The company announced its closure “in view of employees’ safety” a week later.

“The tearing down of Apple Daily, one of the major Chinese-language media critical of the ruling regime in Beijing, after years of harassment, is sending a chilling message to Hong Kong journalists,” says Cédric Alviani, the East Asia bureau head of Reporters Without Borders.

Seven people associated with Apple Daily, including journalists and executives, have been charged under national security law, which could lead up to penalties of up to life imprisonment so far.

After Apple Daily’s closure, Tse felt lost about her career in journalism and sad for the dwindling press freedom in Hong Kong. “It is not just about a few hundred employees losing their job. It is about the voice of Apple Daily, which could not be found in other news media outlets,” Tse says.

The city’s press freedom world ranking dived from 18 in 2002 to 80 this year, according to Reporters Without Borders.

Tse is now working for Hong Kong Citizen News, as it gives her room to produce good news stories. She believes if she loses her job as a journalist in the future, she will still do reporting in her free time. “I don’t have to give up. I will continue to practice journalism and do reporting as long as I can,” she says.

“I don’t have to give up. I will continue to practice journalism and do reporting as long as I can.”

Another former Apple Daily reporter Leung Ka-lai is also determined to stay in the industry. She is now an independent journalist who posts stories about the aftermaths of the social movement on her personal Facebook page.

Leung has been a journalist for more than 15 years. Before Leung was invited to join Apple Daily’s local news features section in June 2018, she worked for other local news media outlets like The Standard, U Magazine, Metro Pop, and Ming Pao Daily.

Even though many of her ex-colleagues have left the industry, she believes in the value of quality journalistic work and is determined to stay on.

“I want to make a record of what is happening to this generation,” she says. Leung’s Facebook page currently has more than 26,000 followers while her Patreon page has around 200 followers.

Leung feels sad about the news industry in Hong Kong. “The authorities not only suppress press freedom in Hong Kong, but also treat journalists like criminals,” Leung says.

Being an independent journalist, Leung does not have any legal support. “No one backs me up. No one offers me legal advice,” she says.

Leung fears that if she has any legal troubles, she will have no financial and legal support but her own.

Apart from local news reporters, seven former Apple Daily sports reporters set up Sportsone (體壹), an independent online news media to continue their journey in journalism. Ping is one of them. He refuses to reveal his full identity due to safety reasons.

“We do not want to give up and leave the news industry… We want to speak up for Hong Kong athletes and coaches,” Ping, who had worked for Apple Daily for 26 years, says.

The Facebook page has over 75,000 followers, but they are still struggling to survive.

Ping’s teammates take up part-time or full-time jobs and spend their free time to work for the platform. “We still cannot make enough to pay reporters and cover their travel expenses,” he sighs.

“Sportsone cannot solely rely on Facebook in maintaining its operation. Facebook likes cannot be turned into income. Our members have to find other ways to survive financially,” Ping says.

Despite the hardship, Ping’s team is trying their best to sustain its operation. “We are still passionate about sports and journalism. Passion is the reason why we continue reporting sports news,” he says.

“We do not want to give up and leave the news industry… We want to speak up for Hong Kong athletes and coaches.”

“They work hard for their passion, but their income is not enough for daily expenses. It is not sustainable,” he says.

Chan thinks the shutdown of Apple Daily not only has killed 600 to 1,000 jobs in the journalism industry, but also limits news coverage about Hong Kong.

“The manpower of Apple Daily was bountiful…It is very difficult (for existing news media outlets) to fill the gap that Apple Daily has left,” he sighs.

“It is very difficult (for existing news media outlets) to fill the gap that Apple Daily has left.”