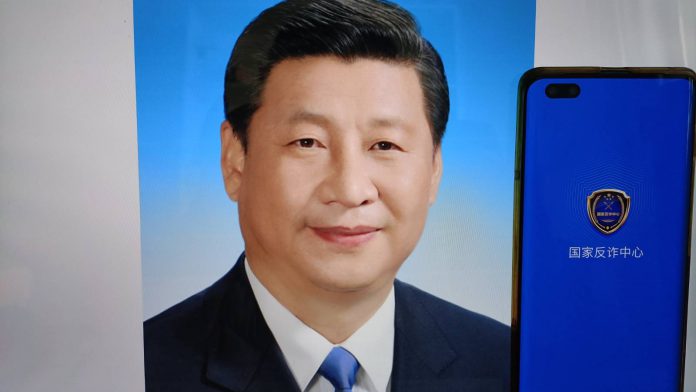 An official anti-fraud app promoted by the Chinese government is disliked by many young Chinese.

Hongkonger Gary Kuang*, who lives in Foshan, Guangdong, was detained for two hours, as he refused to let a police officer check if he had installed the National Anti-fraud Centre App in his smartphone on August 19, 2021.

“The officer stopped me when I was walking down a street. He asked whether I had installed the app. I said yes, but actually I did not. I just wanted to get rid of him. The officer then told me to show him my phone screen and I immediately told him he does not have the right to check my phone,” the 20-year-old student, who declines to reveal his full identity out of fear that the police may trouble his family, recalls.

Kuang was then taken to a police station and was detained.

“I do not want to download the app, because it can access phone users’ messages, app installation, websites visiting records and track the use of VPN,” Kuang says.

Kuang, who now studies in Beijing, says his college also requires students to download the app and send a screenshot to the class WeChat group to prove they have downloaded it.

“When asked whether I had downloaded it, I directly said no. I told the college that I would not install it and they did not trouble me further,” Kuang says.

“I do not want to download the app, because it can access phone users’ messages, app installation, websites visiting records and track the use of VPN.”

A “Super Warship” is Watching You

The app was developed by the police and launched in early March last year. It has been promoted by the authorities nationwide in China.

People have been told to install the app by various parties, including property management staff of their residence and their working units.

The Guangzhou Daily, owned by the Guangzhou Committee of the Chinese Communist Party, stated the app is a “super warship” against frauds.

“With the app, users can easily report frauds and evaluate risks. The app also alerts users of possible scams and exposes the latest scam cases,” the newspaper reported.

The app requires 29 permissions from a user’s device, including reading and removing incoming messages without telling the user and editing system settings. Users must also enter their identification numbers and home addresses when registering for it.

The authorities have mobilised civil servants to promote the app and urge the public to download it.

Tia Huang*, a university student union member in Shenzhen, Guangdong who declines to reveal her identity, is one of those who has been assigned to promote the app on campus.

“We were required to start promoting the app in late March by a teacher from the Youth League Committee. We promoted anti-fraud information on the campus vaccination site. App installation was voluntary,” Huang says.

Huang reveals that the student union organised lucky draws for those who had downloaded the app on the vaccination site as soon as they finished downloading. She says prizes such as speakers and earphones were donated by district police.

“As far as I know, the district police ordered my university to help promote the app on campus. Then the university assigned the task to us,” she says.

The promotion stopped in late April 2021 after some students complained about the privacy risks of using the app.

Huang confesses that she does not know the functions of the app well and she dislikes the way the app is promoted.

“I do not know what is special about the app except that it can identify suspicious calls and messages. It is nothing new. Other apps can also do it. Its functions are not clearly stated and cannot convince me (of its effectiveness),” she says.

Huang says her friends, whose parents work for the police force, asked her to do them a favour by downloading the app.

“I do not know what is special about the app except that it can identify suspicious calls and messages. Its functions are not clearly stated and cannot convince me (of its effectiveness).”

App As A Surveillance Tool

Tomoko Ako, a professor from the Graduate School of Arts and Sciences of the University of Tokyo, says the Chinese government is strengthening its surveillance system in the name of protecting people’s rights and safety.

“When everyone is watched by Big Brother, people cannot create and express themselves freely due to fear,” Ako says.

Ako also points out that her colleagues are forced to install Chinese apps like Tencent Meeting to join academic activities with Chinese institutes.

“China is not a democratic country. The authorities can control everything in cyberspace,” she says.

“Chinese apps ranging from banking apps to video streaming platforms have been found to excessively collect sensitive user data, often without user consent,” The University of Toronto’s Citizen Lab stated in a report published in January 2022.

The report scrutinises the privacy risks and censorship problems of My2022, an app which all attendees of the Beijing Winter Olympics are required to download.

But Ako remains optimistic that people can voice opposition to the National Anti-fraud Centre App.

“The internet industry is productive in China. I think the Chinese government will not shut down everything online. So people can still express their ideas,” Ako says.

“I doubt the app is about countering scams. It is important for the government to explain more, such as on how the users’ data will be collected and stored,” she adds.

“I think the Chinese government will not shut down everything online. So people can still express their ideas.”