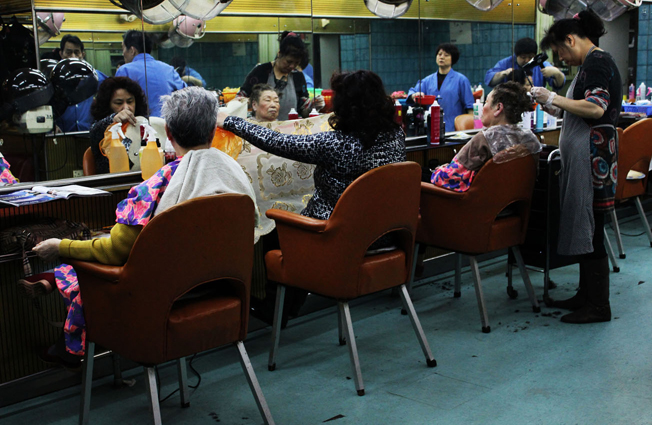 In an old, sparsely furnished barber shop with only a few customers, some elderly hairdressers gather together and discuss the latest horse racing news. An old mandarin song from the 1930s plays in the background but no one is paying attention.

Those golden days have gone. Where they were once seen as stylish, Shanghai barber shops are now seen as old-fashioned. Their survival is threatened by rising rents and the loss of customers.

Lin, who is in charge of beauty treatment and manicure at a Shanghai barber shop in North Point, says rent is the hardest thing to cover in their operation.

“If the rent is too high, we are unable to survive. But if the rental amount is acceptable, people of our age will keep on working for it, treating the job as something that we can rely on.” she says.

Mr Fan is another hairdresser who still works in a Shanghai barber shop in Chai Wan. He agrees the business is much harder than it used to be.

“In the past, there were at least more than ten customers getting their hair cut each day. But now, the number of customers shrinks to less than ten.” says Fan, “We can’t earn much from the business.”

The decline in the business has also led to fewer workers in the industry. Barber Wong and his peers now have to do everything themselves; hair washing, cutting, blow-drying and shaving.

“The number of “see-fu” will decrease as they pass away,” he says.

Although the industry itself is declining, the people working in it still love their jobs as they always have.

Lin treasures the loyalty of customers a lot. She says that most of the customers who visit her shop are old regulars who started getting their hair cut there when they were young. They would stick to the same hairdresser for many years.

As for Fan, he is proud of the haircutting skills gained from his many years of experience. Although electric razors are available, he still insists that everything should be done the old-fashioned way, by hand.

“If we use electronic equipment, the essence of traditional Shanghai barber shop will be lost.”

As long as Fan and other barbers still guard the old ways, that essence can be preserved. But it seems the days are numbered for Hong Kong’s Shanghai Barber shops. Maybe someday the scene we first encountered will be a scene we only see in movies.