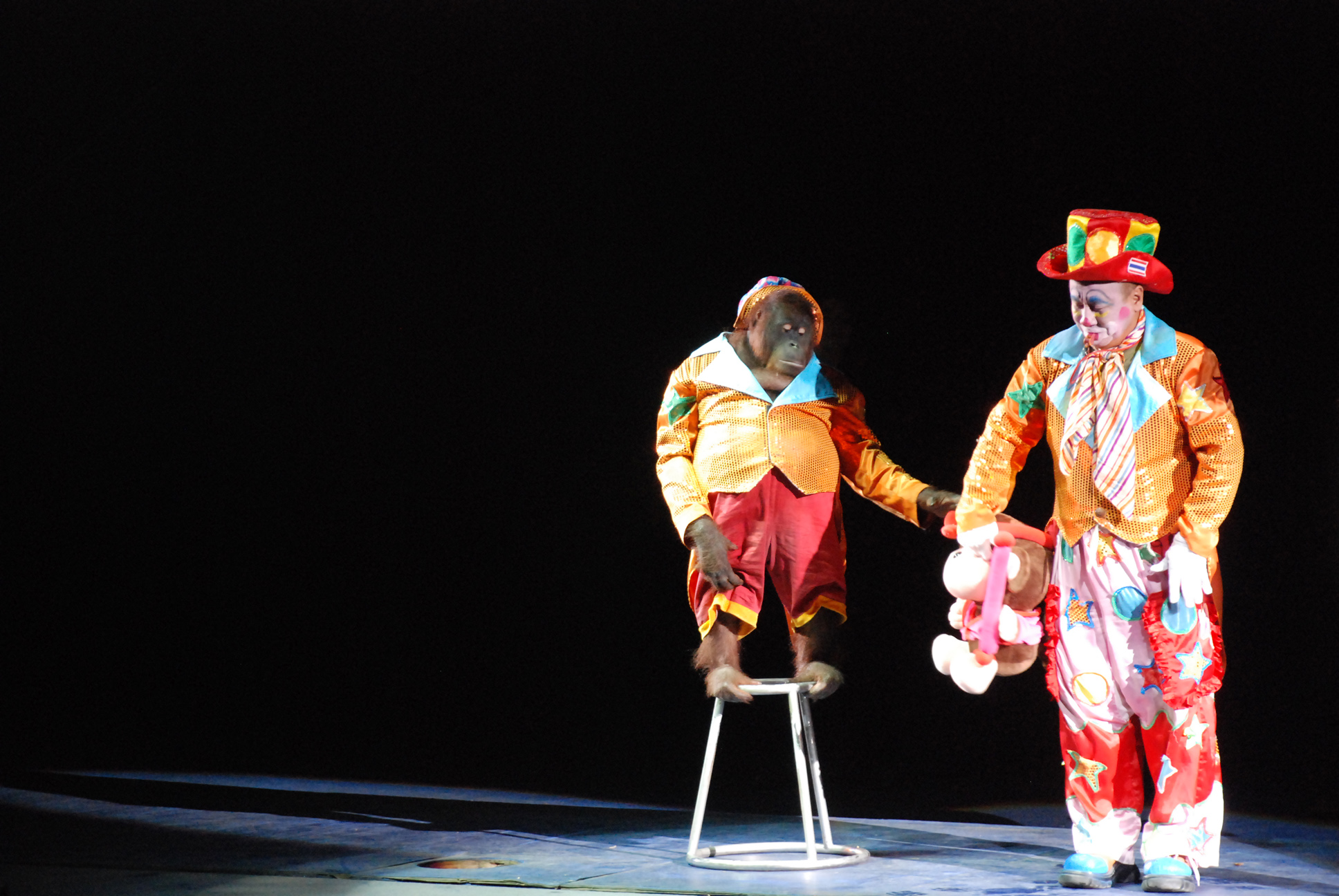 On a lazy Sunday afternoon, a group of monkeys and orangutans, dressed in colourful costumes, get ready for the Monkey King performance. They step out of their cages onto the stage. They drive a car and play tug o’ war. Humans clap and cheer as they show off their “talent”.

They are performing at the Chime-long Xiangjiang Safari Park in Panyu, China. The park houses a wide range of species including monkeys, tigers, elephants, chimpanzees, hippos and pandas. Some are kept outdoors while others are kept in small indoor enclosures..

Animal welfare groups like Animals Asia and Asian Animal Protection Network monitor Chinese zoos regularly. They have found living conditions for animals in many zoos are inadequate. Most zoos stage performances for which the animals undergo cruel training and are forced to perform tricks.

The groups have written scathing reports about Chime-long in their previous investigations in the past few years. During a visit in early November 2011, Varsity found the situation has generally improved. Some of the most dangerous performances, such as tigers jumping through fire hoops, have been eliminated. The zoo is large and the living environment of most animals is fair. Visitors say the animals look healthy and happy.

Zoo staff members say the animals are fed regularly on diets that include raw fruit or chopped meat. Apart from their basic daily portions, the zoo encourages visitors to feed the animals with food prepared by the zoo. Visitors can throw bananas to elephants and chicken meat to tigers.

While humans may consider it a luxury to be fed everyday, animals spend most of their time looking for food in the wild. They need stimulation, not ready-to-eat meals. “Animals need to be allowed to look for food. They need something else to do. You won’t be happy in a featureless prison with food pushed in every day,” says Dr John Wedderburn, founder of Asian Animal Protection Network.

Dr Jill Robinson, founder of Animals Asia, condemns the zoo’s practice of feeding chopped up food to wild animals. Meat-eating animals should be taking down live species and eating the whole animals, which include the fur, the skin and the bones.

Some wild animals are kept in sparse, small cells. They are prevented from portraying their natural characters. The lack of space causes different manifestations of ‘zoochosis’, psychotic behaviour displayed by animals kept in captivity. Chimpanzees bang their heads on an iron door and tigers walk along a repetitive path.

Animals go cage crazy in such tiny place. “Going to a zoo to see wild animals is like going to a prison or a mental hospital. You don’t see normal behaviours,” says Wedderburn.

The zoo holds animal performances several times every day. Elephants play football and basketball during the performance. They also have to walk on a balance beam on their hind legs. Monkeys perform human acts such as sweeping the floor and planting vegetables.

Animals also perform in the Chime-long International Circus Show. In between the acrobatic shows, animals come out to demonstrate tricks. Elephants ‘dance’, orangutans perform magic tricks, and black bears jump through a hoop. Most members of the audience think the animals look happy and healthy in the show.

Although these seem to be less dangerous than tricks performed in past years, Jill Robinson, believes the zoos are still conducing cruel training regimes behind the scenes. She says they train animals through negative reinforcement. Even if the animals like the food rewards, it is only because they are hungry and starved before the performance. For Robinson, the fundamental issue is animals do not want to be in the arena in the first place.

People enjoy the show because they have yet to realize the animal suffering. Circuses and safari parks are becoming more aware of their unacceptable practices today. Zookeepers are closing down their some of their shows as they know the public does not want to see cruelty.

Animal rights activists agree animal welfare in China is improving overall. Robinson says there are more than 70 animal welfare NGOs in the mainland now. Most of them participated in pushing for an anti-animal cruelty bill. But these groups are still small and have limited resources. They rely on volunteers and donations. Still, after years of campaigning, animal rights activists are beginning to see increased awareness and hope.