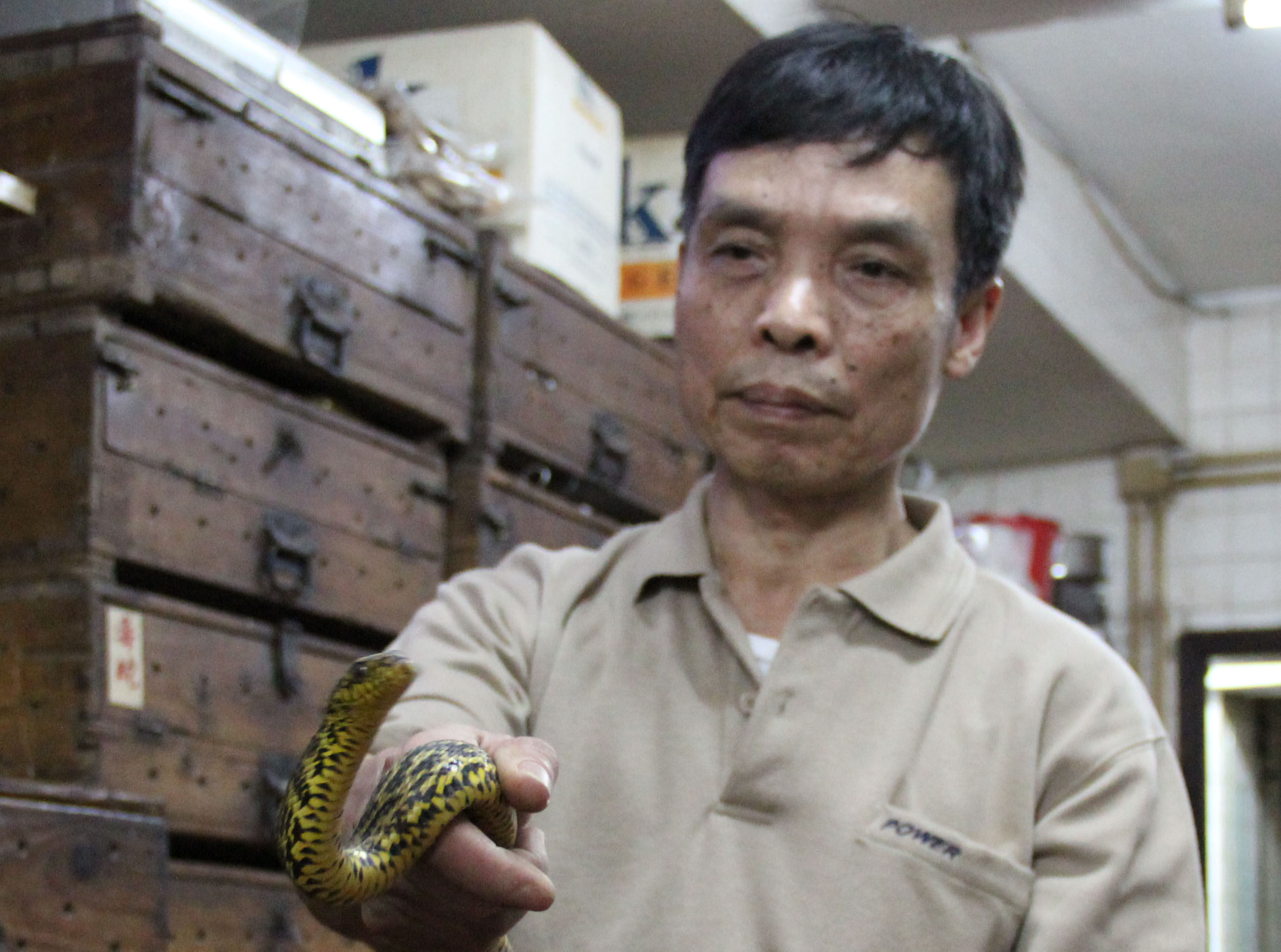 Despite being a cosmopolitan city, Hong Kong is home to 52 species of snake, fourteen of which are venomous. Banded Krait, Many-banded Krait, Chinese Cobra, King Cobra and Bamboo Pit Viper are the five venomous snakes commonly seen in Hong Kong.

Snakes are very often spotted by hikers in country parks or people who live in the mid-levels and village houses in the suburbs. Some of them will directly contact the snake kings; while some will seek help from the Police, who will then call the snake kings to catch the snakes. The captured snakes, be them venomous or non-venomous, will be sent from the Police to the Kadoorie Farm and Botanic Garden.

Snake Kings are people who catch snakes for a living. Also, they usually operate a shop serving a Chinese traditional dish, snake soup in some old districts in Hong Kong. They are called the “snake king” (se4 wong4) in Cantonese.

Working hand in hand with the snake kings, the Kadoorie farm provides temporary shelter for the captured snakes. Dr. Gary Ades, Head of Fauna Conservation Department, has been working in the Farm for over fifteen years. As he says, vets of the Farm will first examine those received snakes, then release them back to the nature in areas that are further away from the residential areas.

As Ades further explains, he believes that snakes, poisonous or not, are part of the nature and have an important role in the ecosystem. It is essential to release healthy snakes back to their nature to maintain the balance. For example, common rat snakes, that the Farm occasionally receives, which he describes as “farmers’ friends’”, carry a role to protect a farmer’s harvest as they feed on rats.

Lau Tit-pong, an experienced snake king in the East Kowloon, has been offering his skills in catching snakes for more than 20 years. As he says, at peak seasons, which is from May to August, he receives two to three orders per week. Lau has mastered a set of snake-catching skills through his experiences and is able to handle snakes confidently and professionally. Nonetheless, there is one conventional procedure that is not welcomed by the Farm.

As Lau says, “(In the past,) We used to de-fang the snakes immediately after catching them, so to made it less dangerous to put in a bag.”

However, as the Farm explains, since the fangs are essential for killing preys after releasing back to the wild, poisonous snakes cannot survive if snake kings de-fang them. Since then, Snake Kings capture snakes with their bare hands and no longer de-fang them.

Speaking of the continuality of this craftsmanship, Snake King Lau is not so optimistic. Lau says that it is almost impossible to find new blood to join the industry today. Yet, he understands that snake catching is often perceived as highly dangerous and young people nowadays would rather opt for ‘less-demanding’ jobs as they are better educated.

Ho Cheuk-hing, another experienced snake king who has been capturing snakes for more than 40 years, echoes with Lau, regarding the profession of snake catching as a ‘sunset’ business. Yet, he still finds a sense of satisfaction from his job today. Perhaps that is why he keeps working as a snake king as he has already stepped into his retiring age.